It was just another routine inter-island flight when an Aloha Airlines jet took off from Hilo, bound for Honolulu, on April 28, 1988. Cruising at 24,000 feet, an 18-foot section of the plane’s roof suddenly ripped off, causing an explosive decompression, creating a gaping hole in the fuselage and sucking a flight attendant out of the plane.

The Boeing 737 landed safely at Kahului Airport on Maui, but it goes down as one of the most significant events in aviation history. 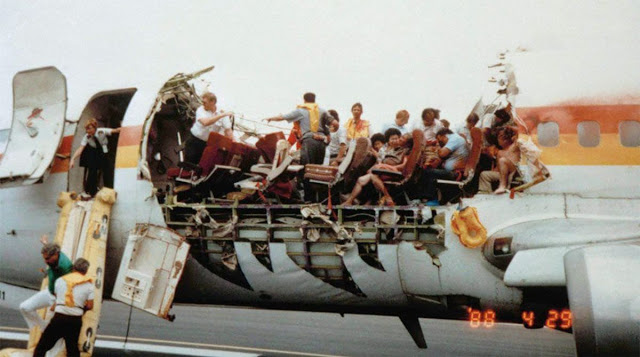 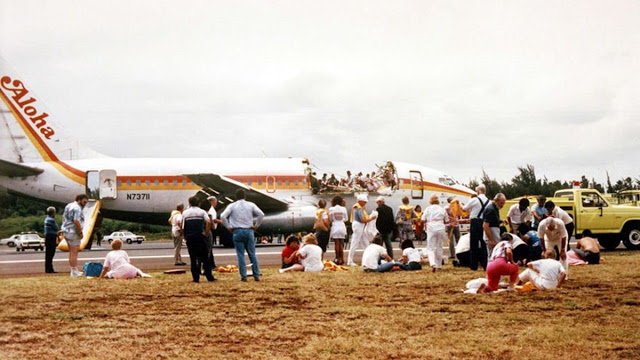 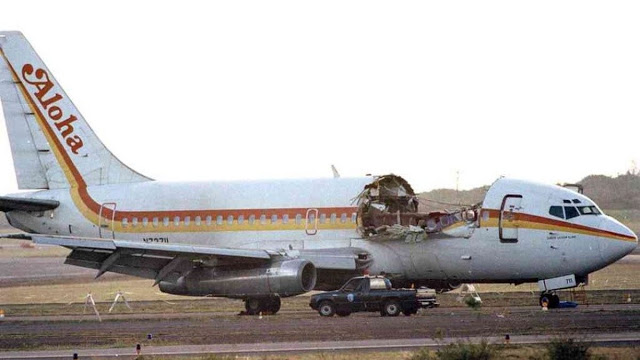 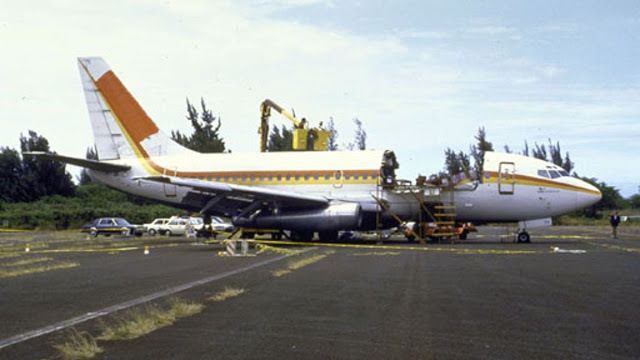 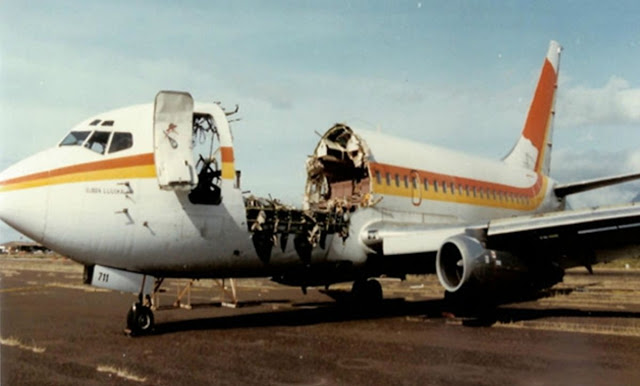 Flight 243 departed from Hilo International Airport at 13:25 on April 28, 1988, with six crew members and 89 passengers on board, bound for Honolulu. Nothing unusual was noted during the pre-departure inspection of the aircraft, which had already completed three round-trip flights from Honolulu to Hilo, Maui, and Kauai earlier that day, all uneventful. Meteorological conditions were checked but there were no advisories for weather phenomena reported along the air route, per AIRMETs or SIGMETs.

After a routine takeoff and ascent, the aircraft had reached its normal flight altitude of 24,000 feet (7,300 m), when at around 13:48, about 23 nautical miles (43 km; 26 mi) south-southeast of Kahului on the island of Maui, a small section on the left side of the roof ruptured with a “whooshing” sound. The captain felt the aircraft roll to the left and right, and the controls went loose; the first officer noticed pieces of grey insulation floating above the cabin. The cockpit door had broken away and the captain could see “blue sky where the first-class ceiling had been.” The resulting explosive decompression had torn off a large section of the roof, consisting of the entire top half of the aircraft skin extending from just behind the cockpit to the fore-wing area, a length of about 18.5 feet (5.6 m).

There was one fatality: 58-year-old flight attendant Clarabelle Lansing, who was swept out of the airplane while standing near the fifth row seats; her body was never found. Lansing was a veteran flight attendant of 37 years at the time of the incident. Eight other people suffered serious injuries. All of the passengers had been seated and wearing their seat belts during the depressurization.

Co-pilot Tompkins was flying the aircraft when the incident occurred; Captain Schornstheimer took over and steered the aircraft toward the closest airport, on Maui island. Thirteen minutes later, the crew performed an emergency landing on Kahului Airport’s Runway 2. Upon landing, the aircraft’s emergency evacuation slides were deployed and passengers quickly evacuated from the aircraft. A total of 65 people were reported injured, eight of them with serious injuries. At the time, Maui had no plan in place for an emergency of this type. The injured were taken to the hospital in tour vans belonging to Akamai Tours (now defunct), driven by office personnel and mechanics, as the island only had two ambulances. Air traffic control radioed Akamai and requested as many of their 15-passenger vans as they could spare to go to the airport (three miles from their base) to transport the injured. Two of the Akamai drivers were former paramedics and established a triage on the runway. The aircraft was written off.