You picked a fine time to leave me loose wheel.

During the 1920s, Raymond Mays became the subject of the most famous photographs in motor racing. This moment captured when a wheel flew off his Bugatti during the Caerphilly Mountain Hill climb race in 1924, and Raymond is seen watching it go. Despite safety not even stretching to a driver’s helmet in those days, no one was hurt.
The car is Mays’ second Bugatti Type 13 Brescia “Cordon Bleu” in which the driver sits lower in a car with a higher bonnet and a radiator with a wider surround.
Englishman Raymond Mays was an avid racer and through a deal with a Bugatti importer he managed to finagle himself a Type 13 to go racing with. He was so obsessed with performance that he had the engine tuned an order of magnitude higher that it could reasonably handle (6,000rpm), which resulted in the above mechanical failure.
His luck wasn’t totally absent though, the 660 lb (300 kg) car remained upright and skidded to a halt just inches from a precipice that would have almost certainly killed him had he gone over. 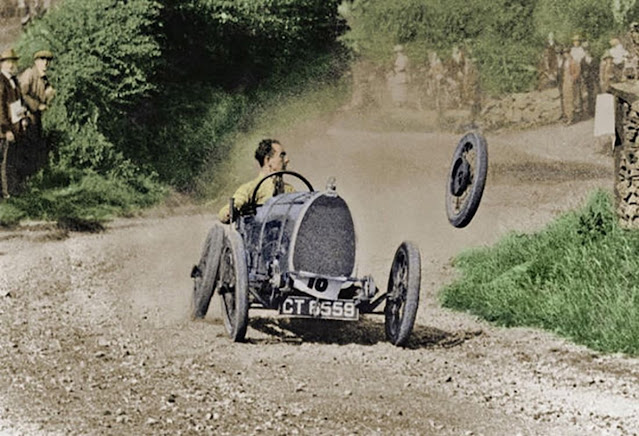