In 1936, Nash Motors introduced the “Bed-In-A-Car” feature, which allowed the car’s interior to be converted into a sleeping compartment. The rear seat back hinged up, allowing the rear seat cushion to be propped up into a level position. This also created an opening between the passenger compartment and the trunk. Two adults could sleep in the car, with their legs and feet in the trunk, and their heads and shoulders on the rear seat cushions. 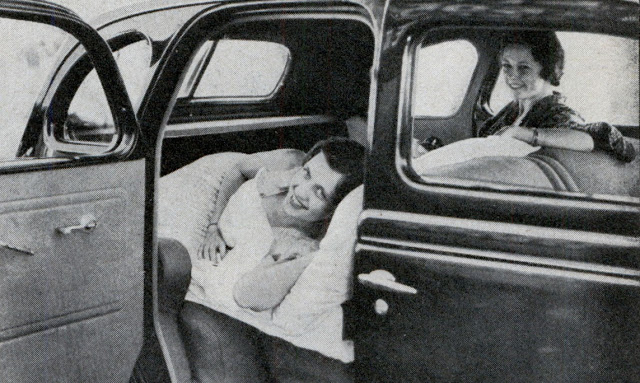 “SEDANS of two popular makes are now offered with back seats which can be converted into comfortable beds more than six feet long and over four feet wide. Cushions have been so designed that they can be moved forward and laid flat like Pullman sleeping-car seats to form a foundation for bedding. The foot of the improvised bed extends into the rear luggage compartment, baggage being transferred to the front seat for the night. When not in use as a bed, the car interior bears no trace of its dual function. The car appears to be a standard, conventionally equipped automobile. The convertible car is expected to prove popular with fishermen, hunters, campers, and tourists who want sleeping comfort without the expense of hotel accommodations or the inconvenience of transporting bulky tents and camping equipment. The car also provides the means of visiting and staying in distant regions which have no hotel or tourist accommodations.” 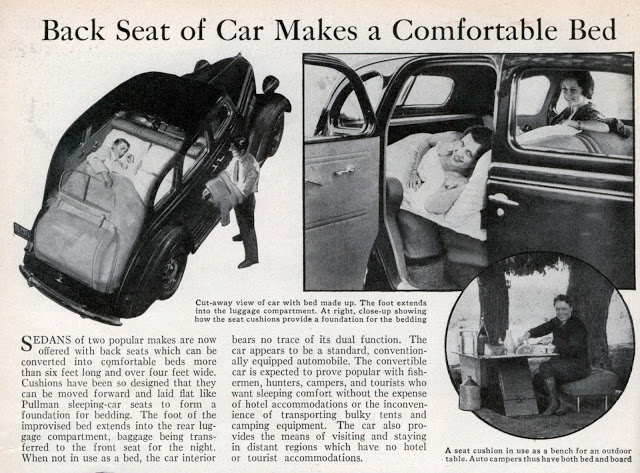 In 1949 this arrangement was modified so that fully reclining front seat backs created a sleeping area entirely within the passenger compartment.

In 1950 these reclining seat backs were given the ability to lock into several intermediate positions. Nash soon called these new seat backs “Airliner Reclining Seats”.