Most of Jeff Begg’s friends and family didn’t know about his “dirty little secret”—a mega-stash of classic cars, vintage racers, speed parts, and motorcycles in Springfield, Michigan. Unfortunately for those who knew him, it wasn’t until his recent death that Begg’s treasure trove came to light. The whole vintage horde goes up for auction on June 15. 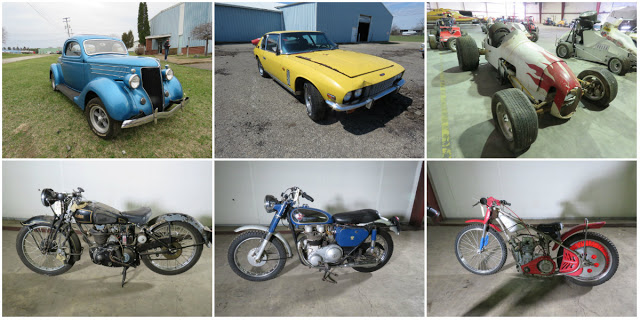 “Anyone can have an Indian, but a British bike is special,” he would say.

When you ask a car guy, why they collect the cars they have, they generally have a dedication to a Brand or a memory that the car triggers. For Jeff Begg, it was the love of engineering. Growing up in Michigan with all those car manufactures, there was always a car event or race in the area. Growing up Jeff had many memories of fixing cars to race them later that night or just cruising for girls. It was all this automotive activity that triggered his love of engineering. He went to college for Engineering and graduated then started working for Parker Hannifin as an engineer in their hydraulics division . In 1976, he left and started his own business in the basement of his Dad’s veterinary clinic. His first product was a basic wooden battery box for Clark Forklifts.

As the business grew, he acquired more product lines and businesses to better serve his customers. If you ever used a propane tank, one of his fittings, valves or regulators was probably on it. He acquired part of Lincoln Brass Works and named this company after another British Motorcycle- Matchless Valve Company. Jeff, was extremely competitive, and wanted always to be on the cutting edge. He found out a competing business in town had developed a machine to make similar fittings cheaper. Not backing down or settling for second place, he grabbed one of his engineers and marched into their plant, started taking notes till they were thrown out by security. If you met Jeff on the street, you’d never know he was a hugely successful business man. Most of the time, he was in tattered or stained clothes driving an old Cadillac. He constantly surrounded himself with books and learning. His mind was going 50 different directions all the time.

His nephew and business partner, Franco Domingo soon learned just how extensive the great collection had become after Jeff’s passing. Franco, started going through Jeff’s affairs and found out, there was more to his love of engineering. They went into one of his properties and it was filled with vintage race cars, British motorcycles, collector cars, and an array of rare speed parts. It was truly amazing. Nearly every property was packed with his collections. Franco with his wife Corinne, Jeff’s son-in-law Dustin Moon and a team of helpers, took on the task of moving it all to one location all the while finding more treasures daily.

So far, 63 British motorcycles including a rare 1952 Vincent Series C Rapide motorcycle. There is almost every make and model including the namesakes of his businesses- matchless and excelsior Henderson. Panther, Rudge Ulster, Triumph, Moto Guzzi, and more with many rare bikes. The collection hosts some note-worthy midget race cars. 38 in total including a 1947 Kurtis Kraft, the Lockard Badger II, and other race cars with notable drivers and builders.

His love for racing has an enormous array of rare and unique racing parts for vintage cars. Including many Ford FH 4 cylinder and V8 motor parts including for 60hp FH V8’s. Rare Riley Carbs and OHV Conversions for Ford 4 cylinders are everywhere. Offenhauser, Edelbrock, Rook, Eddie Meyer and more wonderful motors and parts.

The collection also has 70 collector vehicles from a 1957 Chevrolet Belair Convertible to a 1936 Ford 3 window Coupe, which he would take to car shows. Then there is a plethora of unique import cars including 2 Marcos, TRV’s, Maserati, and more. Several 1936 Pierce Arrows also grace this eclectic collection.

Everything will be sold in one big day, June 15th, 2019 in Springfield, Michigan. Organized by VanDerBrink Auctions, the event will see the hundreds of bikes and cars Begg collected auctioned off to other enthusiasts.