Despite his Nazi beginnings, Wernher von Braun contributed immensely to the creation of the American space program. 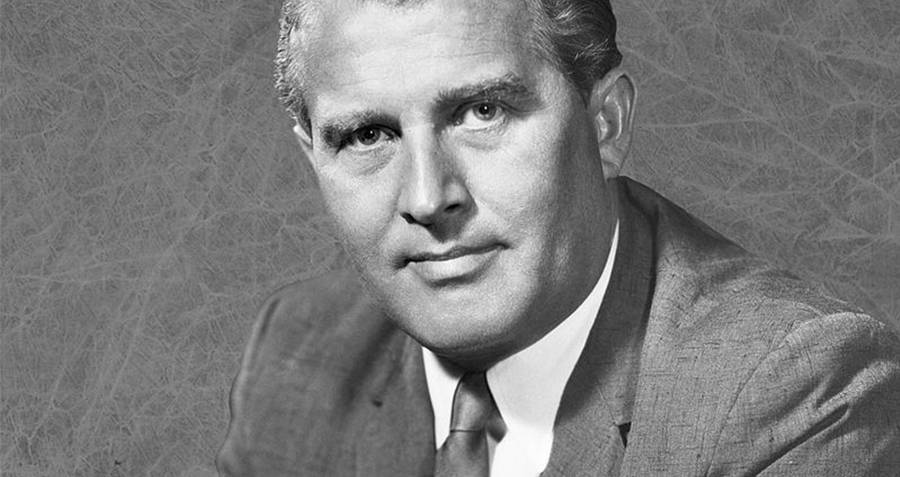 As the Second World War came to an end, and the German forces surrendered to the Allies, the United States found a new enemy.

The Soviet Union had begun aggressively recruiting former Nazi and German scientists to their ranks, usually with threats to their family, occasionally at gunpoint. Their hope was to further their space program and gain an advantage in the Cold War.

As the Germans surrendered, it became clear just how advanced their military arsenal was, and just how valuable their weapons intelligence could be.

In retaliation, the United States began secretly recruiting their own scientists.

Just two months after the Germans surrender, the Joint Chiefs of Staff created Operation Paperclip, the first secret recruitment program. The name stemmed from the secret method Army officers would use to indicate which German rocket scientists they wanted to recruit. When they came across a viable candidate, they would attach a certain colored paperclip to the folder, before passing it back to their superiors.

By September of 1946, Operation Paperclip had been officially, but secretly, approved by President Truman. It had also been approved to expand to include 1,000 German rocket scientists, moved to the U.S. under “temporary, limited military custody.” After the operation was signed off on, those 1,000 scientists were secretly relocated to the United States to begin working.

One of the most valuable and talented recruits for Operation Paperclip was a man named Wernher von Braun.

During World War II, von Braun was one of the leading rocket scientists in Germany. For most of his early life, he worked for Germany’s rocket development program, helping to design the V-2 rocket, the world’s first long-range guided ballistic missile.

Before World War II, he had been working at an operations base in Peenemünde, researching the launch specs and ballistics of warheads. Those who worked with him in Peenemünde claim he had always dreamed of one day using his research to send a manned aircraft into space.

He had also, like most of the German scientists recruited, been a member of the Nazi party, and an SS officer.

According to affidavits that he produced for the Army upon his acceptance into Operation Paperclip, he applied for membership with the Third Reich in 1939, though his membership was not politically motivated.

According to his statement, he claimed that had he refused to join the party, he would no longer have been able to continue working at Peenemünde, the German Army Rocket Center. He added that he had even been arrested by the Gestapo, for making comments about the war that were construed as being anti-Nazi, as well as making “careless comments” about the use of the rockets.

Later in his statement, he included that he never liked Hitler, referring to him as a “pompous fool with a Charlie Chaplin mustache.” The Army later disclosed that he surrendered to them without a fight, after being located in Bavaria.

Regardless of his political stance, his work for the Germans during World War II proved to be invaluable, especially for the United States. 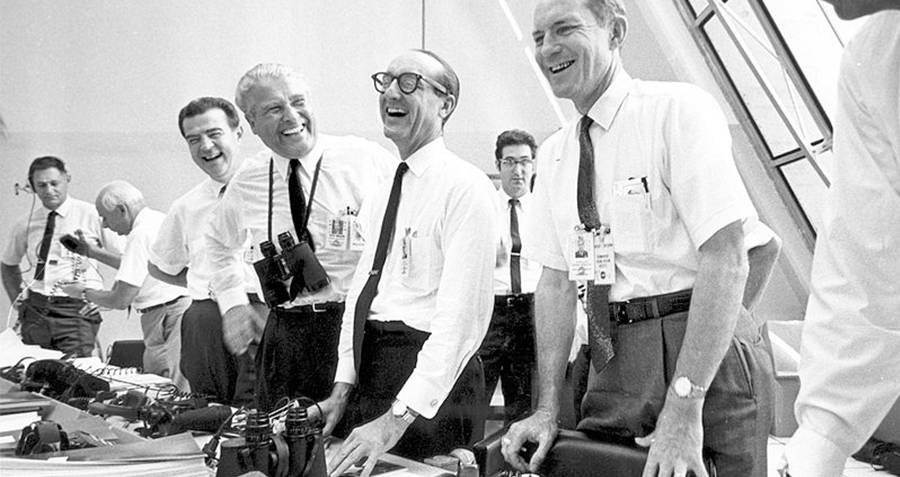 Wikimedia CommonsWernher von Braun celebrates with mission control after the successful launch and landing of the Apollo 11 mission.

While he had created the V-2 while in Germany, most of his important breakthroughs would occur during the years he worked for the United States after the war.

Upon arriving in the United States after being selected for Operation Paperclip, von Braun began working for the Army, testing ballistic missiles, based on the designs of his original brainchild, the V-2. His work with the missiles led him to research launching missiles for space travel, rather than warheads.

Under the supervision of the Army, von Braun helped create test launch sites for the Redstone and Jupiter ballistic missiles, as well as the Jupiter C, Juno II and Saturn I launch vehicles. As he had while working at Peenemünde, von Braun dreamed of one day manning his launches and sending men into space.

Having more freedom in the United States than he ever did under the Third Reich, von Braun published his ideas for manned-rocket powered space exploration in various magazines. Unsurprisingly, being an engineer, most of his ideas were surprisingly on point and ended up being, for the most part, technologically accurate.

Von Braun even conceptualized a space station, that would be locked in orbit around the Earth, and continually manned by international space teams. He also theorized that astronauts might be able to set up a permanent base camp on the moon, built out of the empty cargo hold of their spacecraft. Eventually, he thought, there could even be manned missions to Mars, and potentially even a second base camp there. 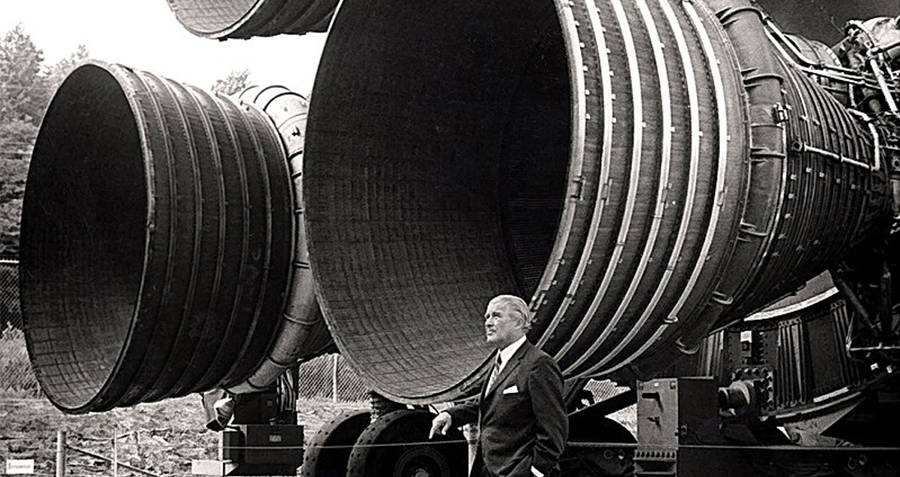 Wikimedia CommonsWernher von Braun standing in front of the engines of the Saturn rocket.

His ideas contributed to many works of science fiction at the time, most notably 2001: A Space Odessey. They also, of course, contributed heavily to the real-life undertakings of the space program.

In 1957, Wernher von Braun’s integrality to the space program became known, when the Soviet Union pulled wildly ahead of the United States in the Space Race. The launch of Sputnik 1 threw the U.S. into high gear, putting von Braun front and center.

Three years prior, von Braun had suggested an orbital launch vehicle, similar to Sputnik, but had been shot down. Now, the Army said, they wanted him to try it. 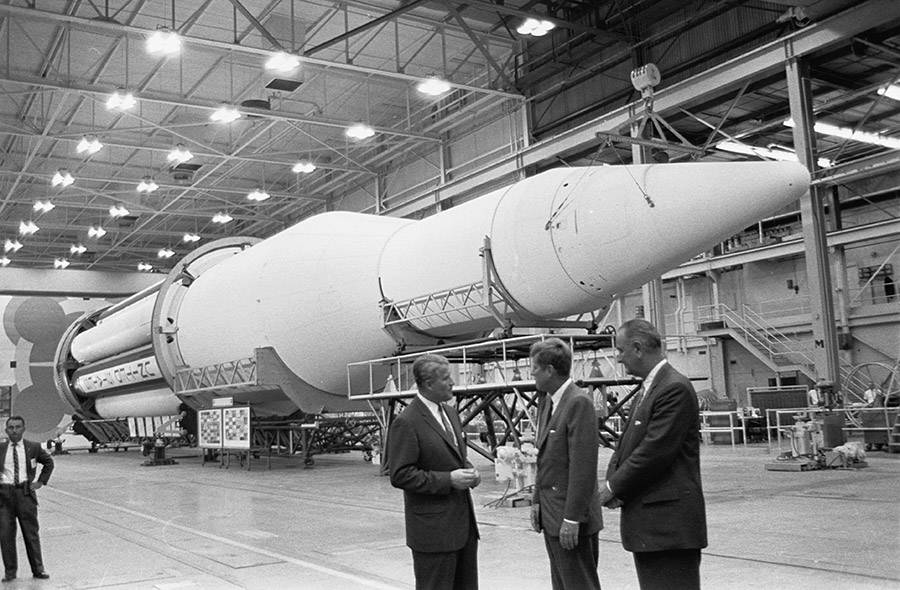 An official branch of the U.S. government was even established in order to devote their full attention to space exploration. Known as the National Aeronautics and Space Administration, NASA for short, it would become the place where von Braun would be headquartered, and where he would make some of the most important space program advances.

At NASA, von Braun carried out tests to ensure that rockets could safely orbit the Earth and pass back into its atmosphere, to prepare for manned missions. He became the first director of the Marshall Space Flight Center, in Huntsville, Ala. While there, he created a program to develop Saturn rockets that would be able to carry heavy loads out of Earth’s orbit.

The Saturn rocket tests were the precursor to the Apollo missions and the rockets that made them possible.

Just a year after Neil Armstrong, Buzz Aldrin, and Michael Collins successfully used his technology to land on the lunar surface, Wernher von Braun was named NASA’s Deputy Associate Administrator for Planning. For two years he carried out his visions and plans to bring men into space, before retiring in 1972, when his plans got a little too big for NASA. 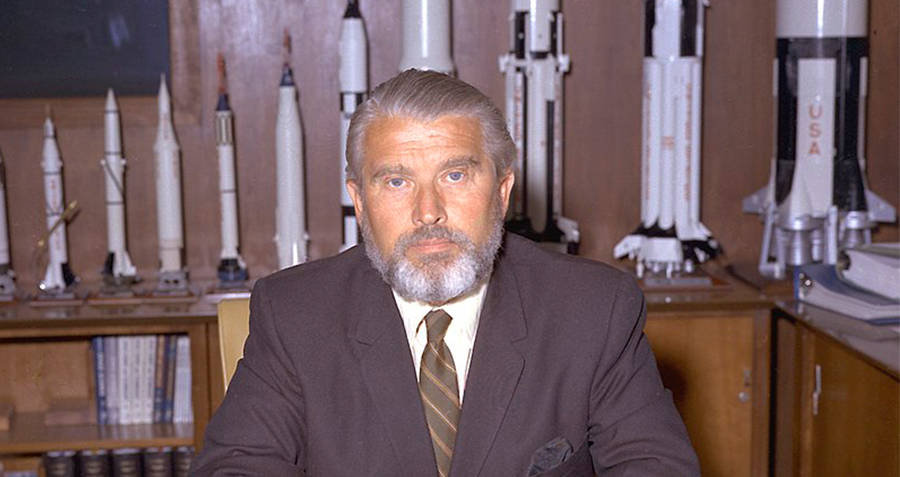 Wikimedia CommonsWernher von Braun with his model rocket collection, at his desk at NASA

Even after he retired, he continued to speak at universities and symposiums around the country. He also conceptualized the idea for a Space Camp, that would teach kids about science and technology while promoting mental stimulation.

Wernher von Braun died in 1977 from pancreatic cancer, as a naturalized citizen of the United States, leaving behind a legacy far more important than he ever realized. Despite his decidedly un-American beginnings, Wernher von Braun became an asset to the country, and almost single-handedly pushed America front and center in the Space Race.