October 1965, CDR Clarence W. Stoddard, Jr., Executive Officer of VA-25 “Fist of the Fleet”, flying an A-1H Skyraider, NE/572 “Paper Tiger II” from Carrier Air Wing Two aboard USS Midway carried a special bomb to the North Vietnamese in commemoration of the 6-millionth pound of ordnance dropped. This bomb was unique because of the type… It was a toilet! 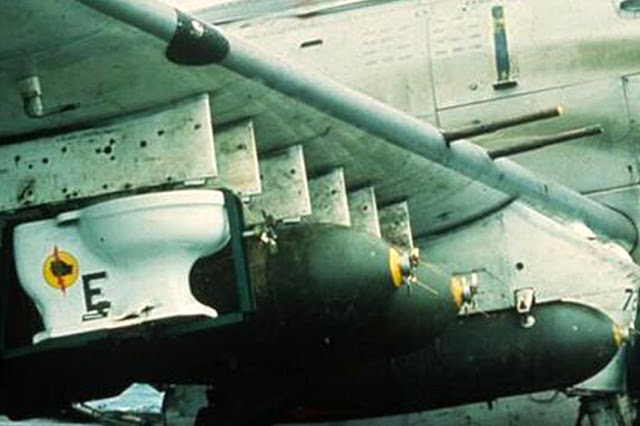 The flight was a Dixie Station strike (South Vietnam) going to the Delta. When they arrived in the target area and CDR Stoddard was reading the ordnance list to the FAC, he ended with “and one code name Sani-Flush”. The FAC couldn’t believe it and joined up to see it. It was dropped in a dive with LCDR Bacon flying tight wing position to film the drop. When it came off, it turned hole to the wind and almost struck his airplane. It made a great ready room movie. The FAC said that it whistled all the way down.
The story of the toilet drop was told by Captain Clint Johnson, the pilot of another VA-25 A-1 Skyraider. The toilet was a damaged toilet, which was going to be thrown overboard. But one of the plane captains rescued it and the ordnance crew made a rack, tailfins and nose fuse for it. Some checkers maintained a position to block the view of the air boss and the Captain while the aircraft was taxiing forward. Just as it was being shot off, Johnson said, “we got a 1MC message from the bridge, ‘What the hell was on 572’s right wing?’ There were a lot of jokes with air intelligence about germ warfare. I wish that we had saved the movie film.” CDR Stoddard was later killed while flying 572 in October 1966. He was hit by three SAMs over Vinh. 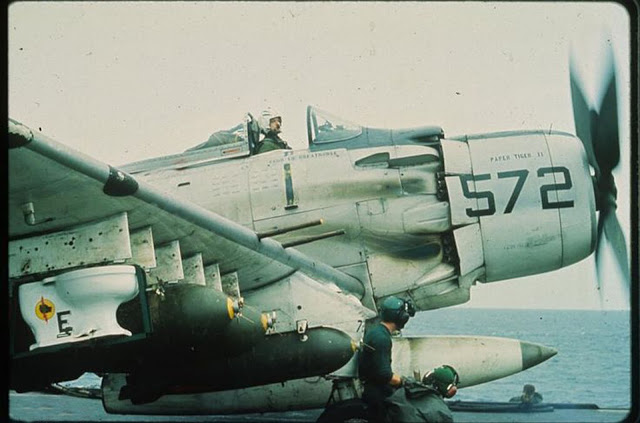 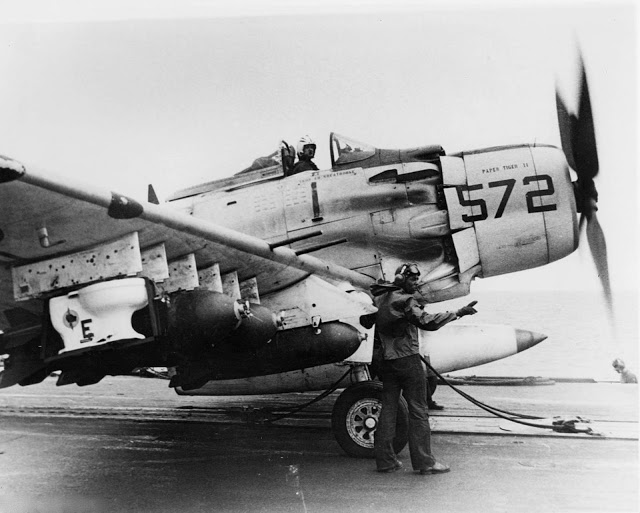 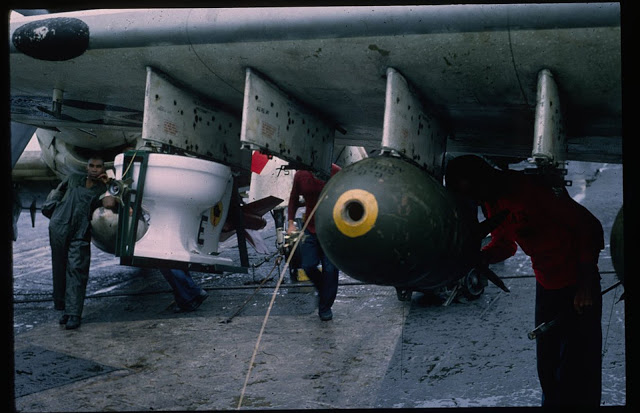 The Douglas A-1 Skyraider (formerly AD Skyraider) is an American single-seat attack aircraft that saw service between the late 1940s and early 1980s. The Skyraider had a remarkably long and successful career; it became a piston-powered, propeller-driven anachronism in the jet age, and was nicknamed “Spad”, after the French World War I fighter.
On September 14, 1966, while Commanding Officer of Attack Squadron 25 (VA25) embarked in the USS Coral Sea (CVA 43), CDR Stoddard was leading a two-plane bombing mission over North Vietnam searching for enemy truck convoys. Near the village of Nghi Thiet, his radar detection system warned him of enemy missile activity. Taking evasive action, he withdrew over the Gulf of Tonkin before his aircraft, a single engine, propeller driven, A-1 Skyraider, was struck by enemy surface-to-air missiles. CDR Stoddard was initially listed as Missing In Action. His status was changed in 1973 to Killed In Action.
(via Sierra Hotel Aeronautics)