The gloves, though not a matching set, are the first of their kind to ever be discovered. 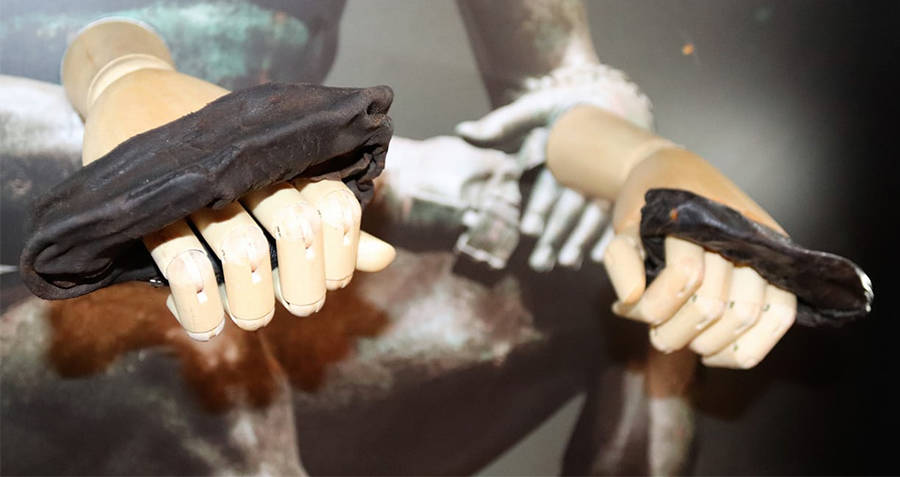 The GuardianThe gloves, though not a matching set, are the first of their kind to be discovered.

A pair of ancient Roman boxing gloves thought to be the only surviving examples of their kind, have been discovered near Hadrian’s Wall in England.

The gloves more resemble padded knuckle guards than modern-day full-coverage boxing gloves, though they clearly did their jobs just as well. Made of thick leather and stuffed with natural material, they acted as shock absorbers for a closed fist.

Though they date back to 120 A.D., the gloves don’t show too much sign of their age; they still fit comfortably on a hand and the leather bears the imprint of an ancient set of knuckles.

The two gloves, similar though not a matching pair, were found in a pre-Hadrianic Roman cavalry barrack, beneath a stone fort known as Vindolanda. The barrack was discovered last year, though the contents are still being uncovered. So far the discoveries include military items, such as swords, and personal possessions belonging to both gladiators and their families.

“The hairs stand up on the back of your neck when you realize that you have discovered something as astonishing as these boxing gloves,” said the Vindolanda Trust’s director of excavations.

The gloves were extraordinarily preserved, as they had been concealed beneath a concrete floor. The dry, oxygen-free conditions protected the natural materials from decomposition. Though boxing was well documented through mosaics and paintings, until now, no physical evidence of the sport had been located.

“It’s always tremendously exciting when you find something that you know about through other sources – depictions on wall paintings, vases … but to see the real thing is something quite unique,” said Patricia Birley, former director of the Vindolanda Trust.

“You learn so much more … For example, the larger of the gloves has been repaired. The owner has really wanted to keep this thing going, so he’s done his utmost to repair it and patch it. It’s that human touch that you get through the real object.”

Like modern-day humans, the Romans used boxing as a past time and a sport, rather than as a combative technique. In the army, it was practiced to promote fighting skills, though often involved competitions put on for spectators.

The gloves will be displayed at the Vindolanda site museum, while excavations of the site resume in April.

Next, read about the 1,200-year-old Viking sword discovered on a Norwegian mountainside. Then, check out how archeologists discovered where Julius Caesar invaded Britain.