In World War II, thousands of combatants across the globe experienced exiting an aircraft and parachuting to the ground, either as a paratrooper dropped into combat or as flight crew escaping a crippled aircraft. Some servicemen discovered that it was enjoyable, and after the war ended kept jumping. 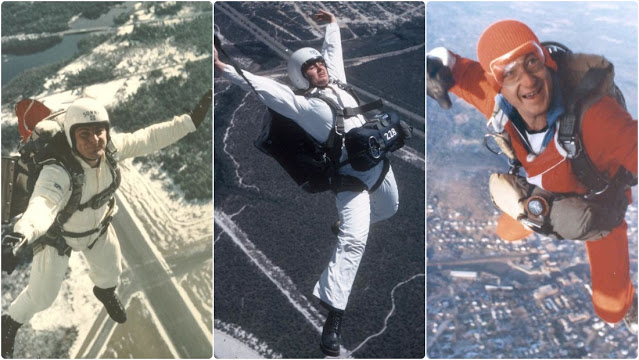 The National Parachute Jumpers and Riggers was born in 1947. This group would later become the Parachute Club of America, and finally its current iteration: the USPA (United States Parachute Association). Parachuting as a sport had begun to permeate the international community.
In the 1970s, sports skydiving became very popular thanks to a quick-release system of the main parachute based on the three rings or rings, designed by engineer Bill Booth, that allowed anyone to use it.
Sport parachuting in the US got a big boost by having the World Championships at Orange, Massachusetts in the early 1960s. Most of these shots from Vince are at OSPC in the mid to late ’60s.