There was a time when bubbletop concept cars were all the rage, both in the design studios of Detroit as well as on the hot rod and custom car show circuit. They ranged from mildly modified factory cars to one-off, completely fabricated show machines with exposed engines and wild paint jobs. Guys like Ed “Big Daddy” Roth, Darryl Starbird, and Dean Jeffries made a name for themselves building these wild show cars in the late 1950s and well into the 1960s.

Scott Wiley was inspired by those builders and their machines and knew that he would have something similar for himself one day. Scott got his inspiration while watching an early episode of The Andy Griffith Show, he liked the swoopy lines and the horizontal tail fins. Scott found a 4-dr with a 6-cylinder and removed the entire roof, windshield and all, from the 30k mile, all original Ford and actually drove it around, sans roof, for the first summer.

Scott enlisted the help of Cody Burghdorf, whose Michigan shop was just a hop, skip and a jump from his Warsaw, Indiana, home. Cody set about fabricating the tilt-up, twin canopy roof. While the original intent was to have the canopies custom fabricated, it proved to be far more reasonable to use these actual aircraft pieces. Two electrically actuated cylinders raise and lower the roof smoothly and quietly.

To make the car just a bit more interesting, the passenger side doors were welded shut and all the gaps filled and smoothed, giving that side of the Ford a completely seamless appearance. Adding to the jet-age inspired design, the taillight panel was completely reworked and filled with no less than ten 1959 Cadillac taillights. A bullet from the nose of a 1951 Ford was then modified and molded into the center of the taillight panel as a “jet thruster.” Once the fabrication work was finished, Cody covered the whole thing in Roth Metalflake Trippin’ See Sic Blue.

Scott has certainly succeeded in his quest to create his own version of a bubbletop car from the heyday of the custom/concept car craze. 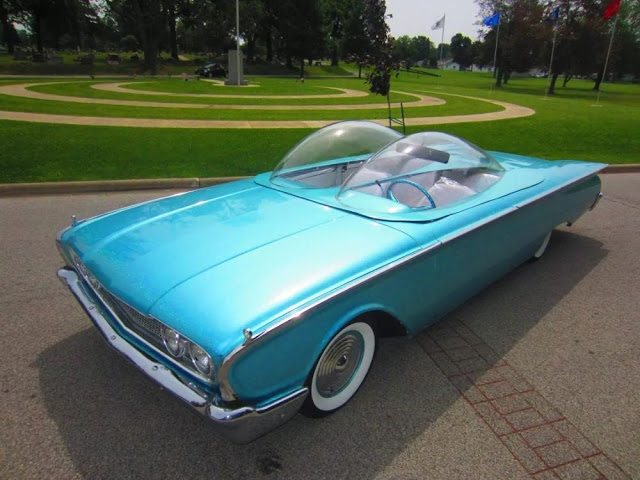