There had been a public outcry in the 1830s when it was made public that women and children worked underground, almost naked, in coalmines, and such work was banned in 1842. However women continued to choose to work on the surface, or pit brow, loading coal wagons and grading the coal because it was well paid. They evolved their own dress consisting of heavy duty trousers, like men’s, jackets, and skirts rolled up, resembling aprons. This practice caused a great deal of controversy in the 1860s, because it was generally considered that such hard physical tasks, (and the robust independent attitudes of the women who did it) were unwomanly, and the wearing of trousers indecent and objectionable, though to our eyes today it would seem thoroughly practical and decent. 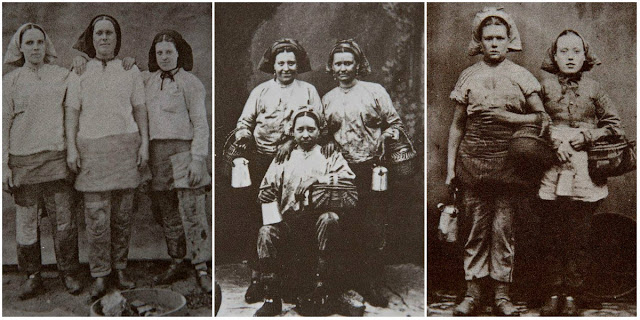 Many articles in the press called for such work to be banned, much against the wishes of the pit brow girls themselves, and photographs of the girls in their working dress were produced by photographers in the Wigan area where most of the girls were employed, and found a ready sale to tourists and visitors.

The Wigan coalmines were not the only heavy industry that employed female workers; women were extensively employed in brickmaking in many parts of the country, and in South Wales in the Tredegar Iron Works. An album of photographs by a Tredegar photographer, in the Gallery of Costume collection, seems to have been produced to accompany articles in the local press in the Merthyr Gazette, campaigning to stop this employment also on the grounds that it was unsuitable for women. The women ironworkers did not wear trousers, but calf length skirts and boots, with tarpaulin aprons. The distinctive feature of their costume was the headdress, a bonnet or scarf thickly padded on top, decorated gypsy-like with beads and coins.

By the 1880s, around 11,000 women had found work aboveground at the coalmines, sorting coal. Conditions were cold and dirty, and so they wore a striking ensemble, as described by one onlooker: “She wears a pair of trousers which formerly, were scarcely hidden at all, but are now covered with a skirt reaching just below the knees. Her head is cunningly bandaged with a red handkerchief, which entirely protects the hair from coal dust; across this is a piece of cloth which comes under the chin, with the result that only the face is exposed. A flannel jacket completes the costume.” The women most famous for this outfit were “Wigan’s Pit Brow Lasses.”

The pit brow lass is one of the features of Wigan, and although there has been more than one attempt to prohibit the work by the authorities, the opposition of the ‘Lasses’ themselves has so far been triumphant. The girls declare that the stacking of coal, pushing wagons from the shaft to a stock heap; or raking stones and rubbish from the coal as it passes on an endless iron belt in a large sieve; or keeping the shoots, down which the coal is tipped into the canal boats, clear with a small rake is not hard work. Most of the lasses are generally single, the daughters of colliers but there are a number of married women amongst them and widows. In most collieries where the pit brow lasses are employed, if a collier is killed and his widow applies for work at the pit brow, she is invariably given a place.

A girl must be fifteen before she can be employed, and as a rule they give up the work at about twenty or twenty four when they get married. But there are some cases when they still go on working, even after marriage, and some years ago, on one of the mines at Wigan there was a woman of over sixty, who had been at the pit brow all her life. 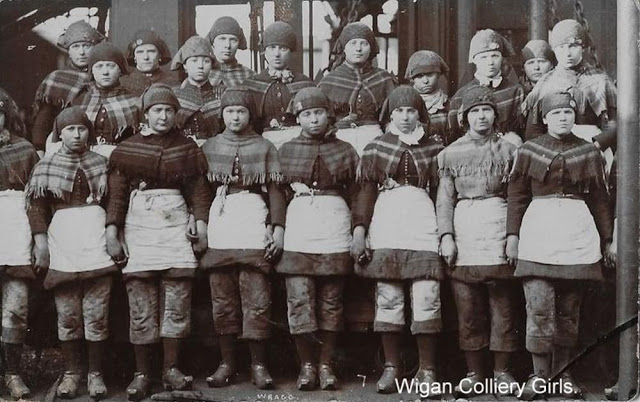 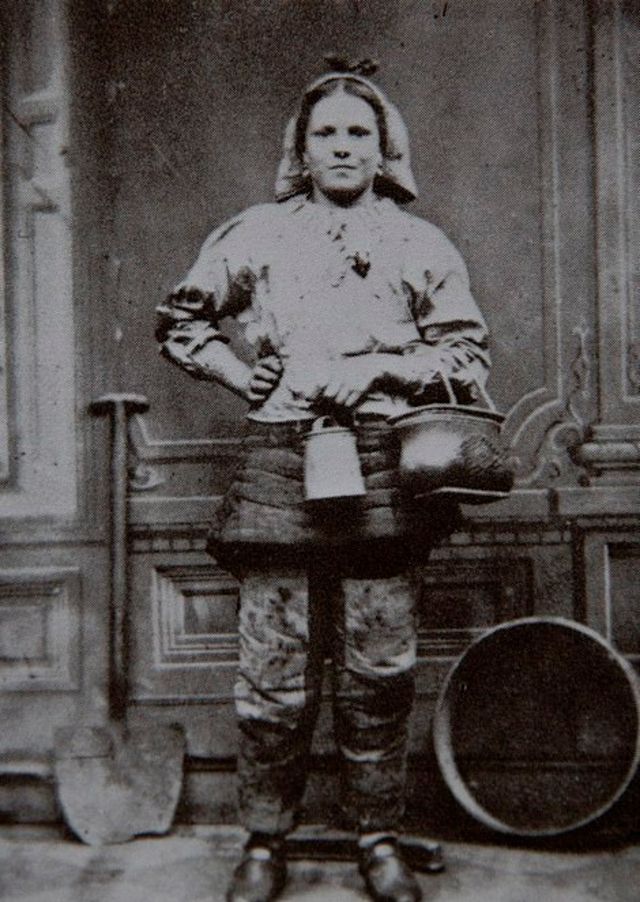 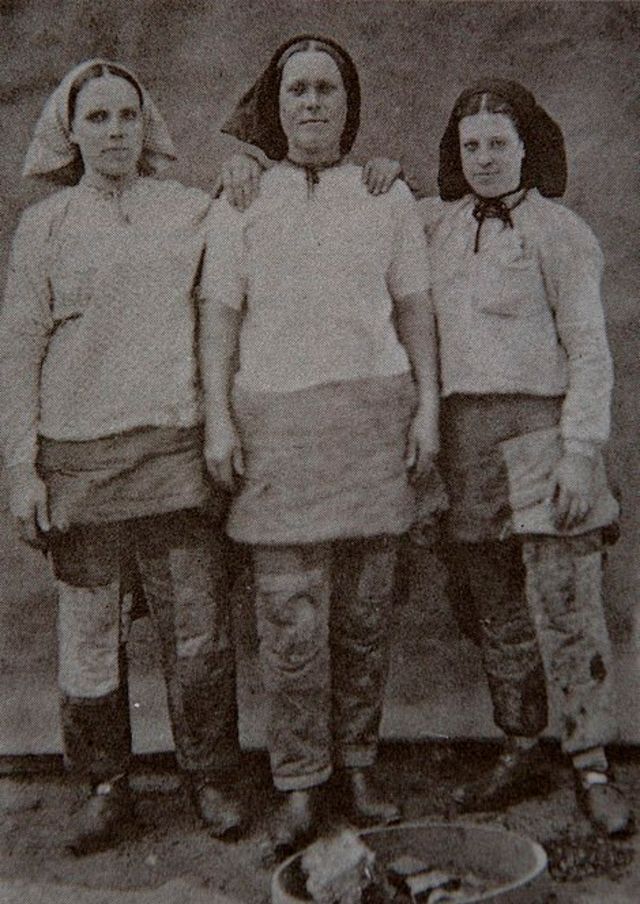 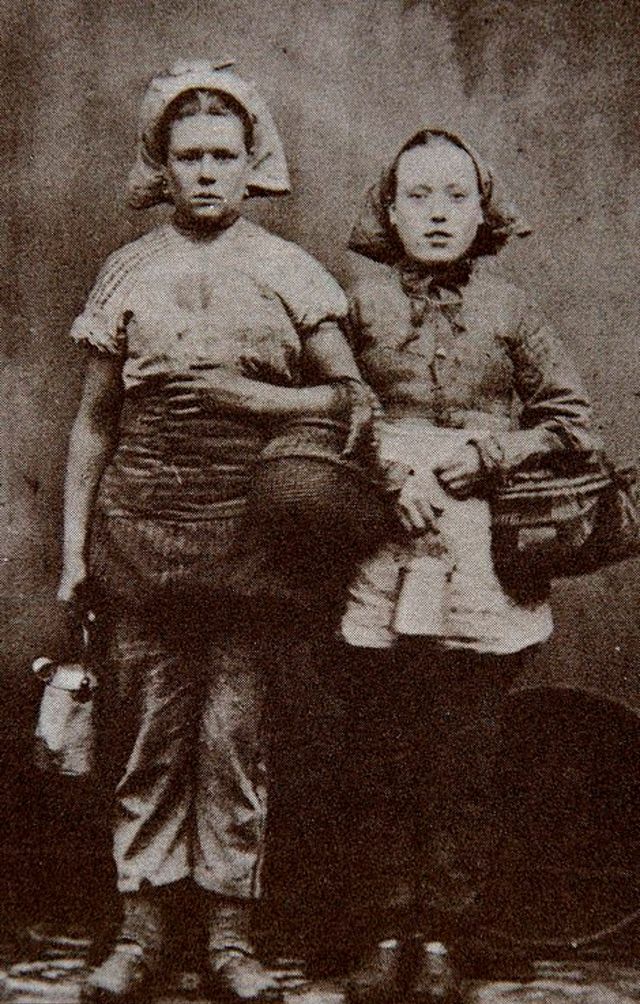 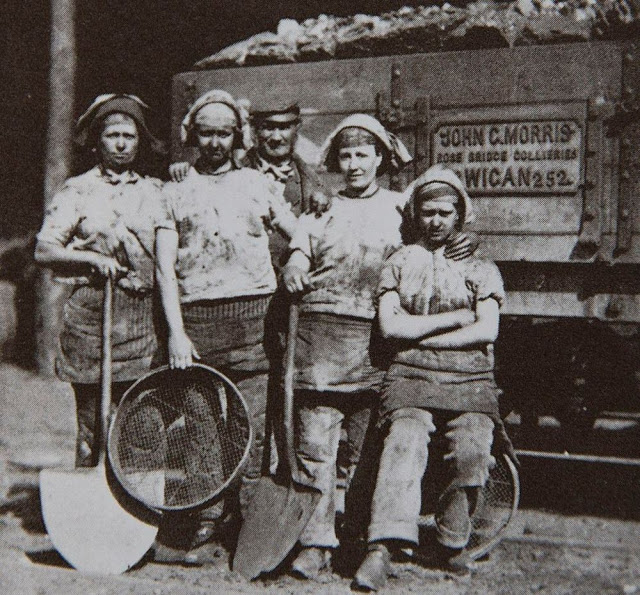