Vin Mariani was advertised to reduce your hunger, aid digestion, cure the flu, and best of all, fill you with energy. 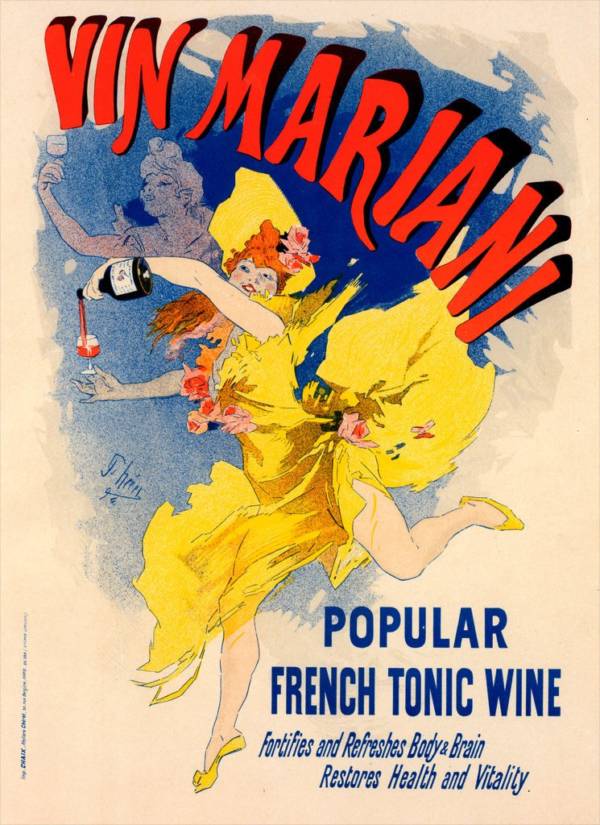 In the last half of the 19th century, a new kind of wine was taking both Europe and the U.S. by storm. Invented by French Chemist Angelo Mariani, Vin Mariani was billed as a health tonic.

It would reduce your hunger, aid digestion, cure the flu, and best of all, fill you with energy. And that last part, at least, was probably true. After all, the main ingredient was cocaine.

In fact, there was about 6 mg of cocaine per oz. And while not quite as addictive or potent as snorting the drug, it was enough to give the drinker a nice buzz. That might go a long way towards explaining why the drink was so popular. But a lot of the credit for the drink’s success also has to go to Mariani himself.

Mariani spent a fortune advertising the drink in just about every way he could think of. Posters were printed up. Advertisements showed up in newspapers across the world. Most importantly, Mariani sent a case to every famous person he could find.

Queen Victoria, Thomas Edison, and Ulysses S. Grant were all big fans of Vin Mariani. Edison even gave the beverage a public endorsement, saying it helped him stay up later so he could work. But the biggest victory for Mariani’s campaign probably came when the Pope Leo XIII awarded the drink an official medal from the Vatican.

The Pope went so far as to claim that he carried some in a personal hipflask to “fortify himself when prayer was insufficient.” Not one to let the opportunity go to waste, Mariani quickly printed up a series of posters advertising the award from the Pope. He also offered people an illustrated book listing all the other important people who had endorsed his drink. 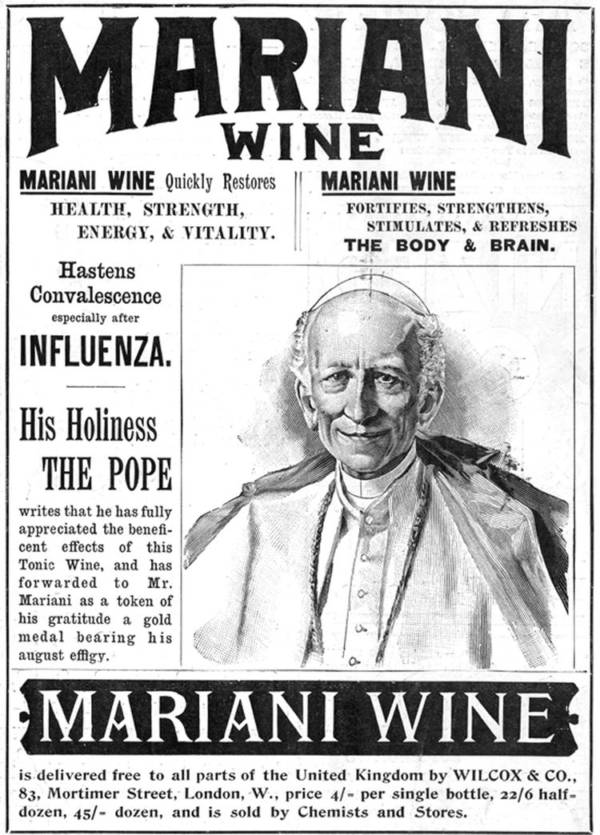 The medical community was already beginning to view cocaine as a wonder drug. And doctors– many after receiving a bottle as a gift from Mariani– backed up all of the claims Mariani made about the drink’s health benefits. They even agreed that it was perfectly safe for children, as Mariani suggested in his ads.

With an addictive product and a great mind for advertising, Mariani might even have one day seen his invention overtake Coca-Cola –which also included a healthy dose of cocaine in the formula– as the world’s most popular drink.

For a few decades, everything looked great for Mariani and his wine. But as the world moved towards the 20th century, the public’s love affair with cocaine was coming to an end.

By then, people were beginning to realize that “tonic drinks” like Vin Mariani weren’t the incredible wonder drugs they thought they were. Though Vin Mariani wasn’t particularly dangerous if used in moderation, lots of similar drinks contained things like opium and heroin. The public started to see the results of using them for everything from treating coughs to helping their children sleep.

Waves of people became hopelessly addicted to these drinks. At this point, doctors and parents realized that giving the drink to children was killing them. Soon, governments all over the world began taking steps to ban products that had dangerous drugs in them, including Vin Mariani.

Mariani limped on for a few years producing a version of his product without cocaine. But since the original ingredients were basically just red wine and cocaine, Mariani was now essentially selling a standard red wine. Unlike Coca-Cola, which at least had caffeine to keep drinkers buzzed, Vin Mariani no longer had much appeal. Soon, it disappeared from the cafés of Paris and the hipflasks of Popes forever.

Now that you’ve read about Vin Mariani, learn about the medicine that used to contain cocaine and heroin. Then check out these shameless cocine ads from the 1970s.