From a 1961 Sears Catalog, this 1961 advertisement for a children’s front seat car belt has shown just how far car safety has come over the years. The clipping saw a toddler sporting a harness attached to a car seat. 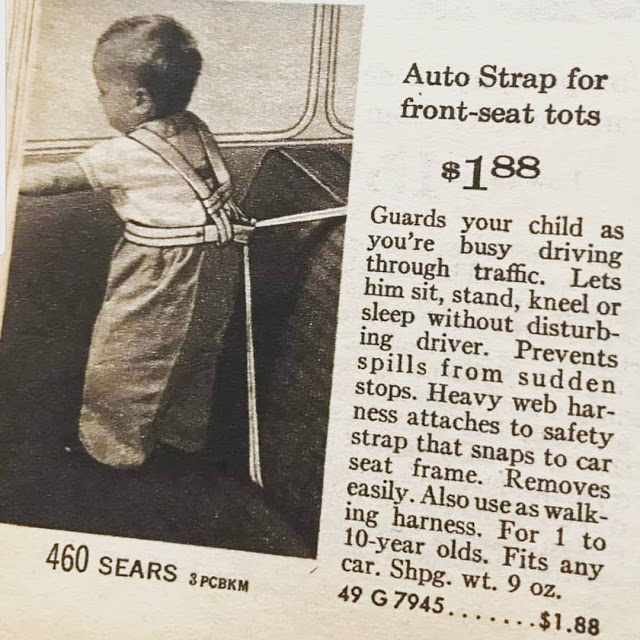 Having retailed for US $1.88, the ‘Auto Strap’ was described as a tool that “guards your child as you’re busy driving through traffic”, and was designed for ages one to ten. It also claimed to allow one’s child to “sit, stand, kneel or sleep without disturbing the driver” and also “prevents spills from sudden stops”.

The first kids’ car seat appears to be produced by the Bunny Bear Company in 1933. Designed for the back seat it really functioned as a seat to prop the child higher up in the car so front seat parents could see them. In the 1940s canvas booster seats on metal frames were available for the front seat, often with their own plastic steering wheel.

The concept of making child seats to enhance safety started in the late 1960s but was not regulated until 1971 when the U.S. National Highway Traffic Safety Administration adopted standards for child seats. Surprisingly there was no requirement for crash tests, but the standard did require the use of the safety belt to append the seat to the vehicle, and a harness to restrain the child in the car.