If you’re looking for a way to scare your kids straight into eating healthy, this original McDonalds commercial might help. Apparently that’s the first Ronald McDonald, although he looks more like a clown that has crawled out of a dumpster in my nightmares! 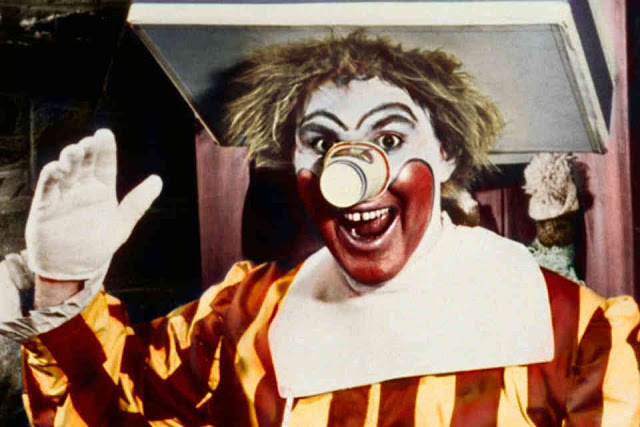 When McDonald’s was first built in the 1940s, they decided to make the very first commercial ever for it, but it took until the 1960s until the commercial was released.

To everyone it was fun watching the new commercial of old Ronald McDonald (Willard Scott), but nowadays people everywhere are frightened and disturbed by this commercial of the creepy Ronald McDonald wearing a cardboard box for a hat, pieces of straw for hair, a paper cup for a nose and red face paint.

Narrator: Ronald, you can’t be on TV and watch it at the same time! Now come on and meet the boys and girls!”

Ronald McDonald: Oh, we’ve already met. I know we’re going to be friends, too, ’cause I like to do everything boys and girls like to do, especially when it comes to eating those delicious McDonalds hamburgers. A magic tray here keeps me well-supplied, McDonalds hamburgers, fries, and milk shakes. Watch for me on TV, we’ll have lots of fun! (Squeek! Squeek!)

Yes, the creepy clown is none other than Willard Scott who was asked to come up with a character similar to Bozo the Clown, whose show had just gone off the air. Willard would later become famous as the weatherman for NBC’s Today Show, although McDonalds never credited him with originating the character of Ronald McDonald.

“The smile known around the world,” Ronald McDonald is second only to Santa Claus in terms of recognition. According to one survey, 96% of all schoolchildren in the United States of America recognize Ronald.

Scott wrote in his book The Joy of Living that he originally created the Ronald McDonald character at the fast-food restaurant chain’s request. On March 28, 2000, Henry Gonzalez, McDonald’s Northeast Division President, thanked Scott for creating Ronald McDonald, during a taped tribute to Scott on the Today Show.

In his book Fast Food Nation, Eric Schlosser claims that McDonald’s replaced Scott on account of his weight, supposedly concerned about McDonald’s image. Scott has denied the claims, citing other commitments at the time.