During the Christmas Truce of 1914, WWI soldiers sang carols, exchanged gifts, and supposedly even played a soccer game.

Daily Mirror/Mirrorpix/Mirrorpix/Getty ImagesBritish officers from Northumberland Hussars meet their German counterparts in no man’s land of the Bridoux-Rouge Banc Sector of the Western Front during the Christmas Truce of 1914.

In the midst of the unrelenting violence of World War I, a ceasefire suddenly swept across areas of the Western front in 1914. Massive amounts of life had already been extinguished, but there was one circumstance that halted the brutality and bloodshed.

It was the first Christmas of the war. It was a day for peace – if only fleeting.

On the night before Christmas, Captain Arthur O’Sullivan of the British army’s Royal Irish Rifles was stationed in Rue du Bois, France. He heard a German accent float from across the barracks. It said, “Do not shoot after 12 o’clock and we will not do so either.” Then, “If you English come out and talk to us, we won’t fire.”

One Irish rifleman ventured out of his trench to test the invitation. After arriving back safely with a German cigar as a gift, others made their way onto the still battlefield. No Man’s Land filled with soldiers meeting each other halfway. 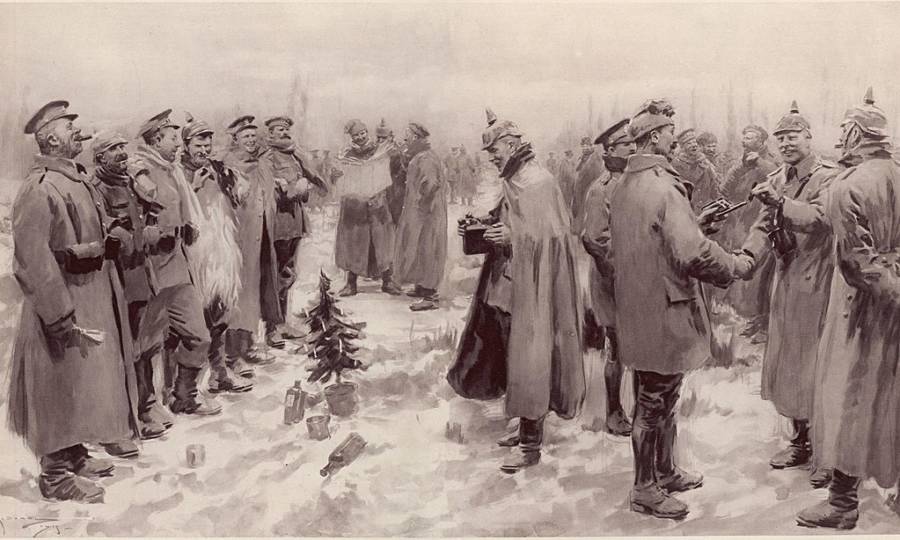 And so began the unofficial Christmas Truce of 1914.

Cautiously, more soldiers began emerging. Germans held up lanterns and called to the British – assuring them in broken English that they wouldn’t shoot. Instead, they wished them a Merry Christmas. Men from both sides intermingled, shook hands, and shared cigarettes and food. 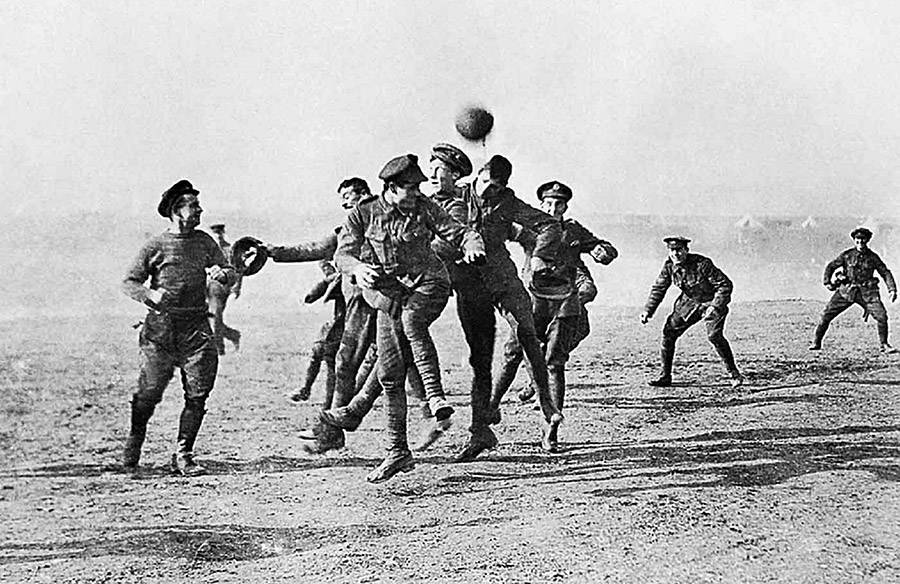 Universal History Archive/UIG/Getty ImagesPhotograph of soldiers playing football in no man’s land during The Christmas Truce.

Some, despite a great debate of the event, even say that a soccer game broke out. Historian Alan Wakefield said, “If it happened — and there’s very few collaborative accounts — there’s second, third-hand accounts of somebody hearing of a game going on somewhere.” However, if you’re keeping score, those who heard about it happening said the game ended three to two for the Germans.

The Christmas Truce also provided a time for the armies to collect their deceased soldiers from the fields. This gesture meant a lot in terms of respect for the dead for both sides.

Many generals and senior officers were not on board with this overall show of goodwill. In some areas, peace lasted until the first few days of 1915 without many shots fired. The military made it clear that this was not acceptable wartime behavior. Another holiday truce of this kind was never recorded.

Fighting did still occur on Christmas in some areas. Corporal Clifford Lane of H Company Hertfordshire regiment explains that upon seeing some Germans emerge from the trenches with lanterns, he was ordered to open fire. 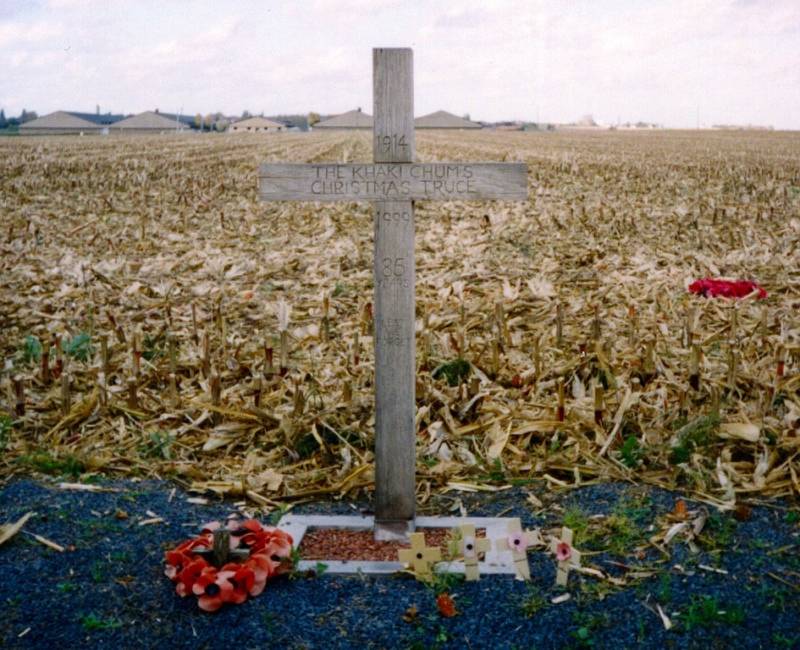 Wikimedia CommonsA cross, left in Comines-Warneton in Belgium in 1999 to celebrate the site of the Christmas Truce.

“The Germans did not reply to our fire and carried on with their celebrations.” Corporal Lane remembed. “They ignored us and were having a very fine time indeed and we continued in our wet trenches trying to make the most of it.”

He later regretted not engaging in the truce with the Germans. “It would have been a good experience,” he said.

But back in 1914, things magically aligned to allow for some holiday spirit. The soldiers involved in the Great War were either green newcomers or weathered veterans. They’d expected the fighting to be short and done by Christmas. The war wasn’t too ‘dirty’; the propaganda machine hadn’t churned up the seething hatred against sides.

The truce is attributed to the last of the romanticized, ‘gentlemanly’ soldiers of the era. These men confronted their enemies face to face. Military strategies may have certainly changed, but it’s comforting to know that on one frosty Christmas morning, adversaries laid down their arms. That they extended hands in a gesture of peace; however temporary it may be.

Next, check out these weird Christmas ads from our past. Then read about the heartwarming story behind the first ever Rockefeller Center Christmas tree.