Burlesque tableaux of well-known historical or legendary incidents will be found a capital form of amusement. Although they should be thought out, they need not necessarily be rehearsed in advance. This entertainment should come as a complete surprise to the larger portion of the guests that is, to all but those who take part.

Let the announcer give the title of the tableau in stentorian tones, with his megaphone, just before the folding doors are opened or the curtains drawn back.

For the tableaux you might try “Bluebeard’s Wives.” Bluebeard is seen standing, sword in hand, while around him on the curtain hang the heads of the ill-fated spouses. To produce the heads, cut holes in the sheet and let the actors thrust their heads through these, after which fasten the loosened hair to the curtain around the head with a safety pin. This tableau would be startling were it not for a sign reading, “We Suffered in the Cause of Votes for Women,” or anything else which is innocent and gives the tableau a humorous twist. 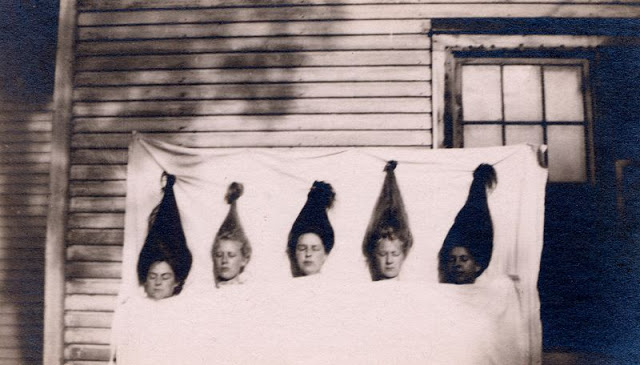 Bluebeard is the villain in a European folktale made famous by Charles Perrault in his tale Barbe bleue. According to the story, Bluebeard married several women, one after the other, and murdered each of them. He threw their bodies in a special room inside his castle. He married yet again and gave his new bride the keys to the castle, telling her that she might go anywhere in the castle except for that one room. While Bluebeard was away, however, his young wife’s curiosity got the better of her and she opened the door to the forbidden room. There she discovered the remains of Bluebeard’s previous wives. When Bluebeard returned, he realized that his wife had found out his secret and told her that she must prepare to die.

The story has several different endings. In one version, the young wife killed Bluebeard with his own sword. In another, her brothers came to her rescue and killed him. The theme of the story of Bluebeard—the penalty for being too curious—appears in the folktales of many countries.