Published in the September 29, 1920 issue of Dayton Daily News, the newspaper believed that entirely new forms of power would be in use in 2020… and while wind, solar, and nuclear do provide some power nowadays, the old forms of power (coal and gas) still dominate. So the paper was too optimistic about the pace of change. 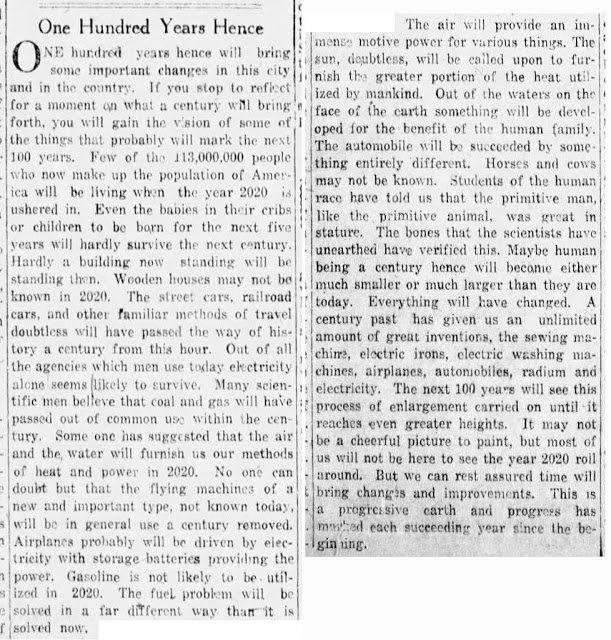 One hundred years hence will bring some important changes in this city and in the country. If you stop to reflect for a moment on what a century will bring forth, you will gain the vision of some of the things that probably will mark the next 100 years. Few of the 113,000,000 people who now make up the population of America will be living when the year 2020 ushered in. Even the babies in their cribs or children to be born for the next five years will hardly survive the next century.

Hardly a building now standing will be standing then. Wooden houses may not be known in 2020. The street cars, railroad cars, and other familiar methods of travel doubtless will have passed the way of history a century from this hour.

Out of all the agencies which men use today electricity alone seems likely to survive. Many scientific men believe that coal and gas will have passed out of common use within the century. Some one has suggested that the air and the water will furnish us our methods of heat and power in 2020.

No one can doubt but that the flying machines of a new and important type, not known today, will be in general use a century removed. Airplanes probably will be driven by electricity with storage batteries providing the power.

Gasoline is not likely to be utilized in 2020. The fuel problem will be solved in a far different way than it is solved now. The air will provide an immense motive power for various things. The sun, doubtless, will be called upon to furnish the greater portion of the heat utilized by mankind. Out of the waters on the face of the earth something will be developed for the benefit of the human family.

The automobile will be succeeded by something entirely different. Horses and cows may not be known.

Students of the human race have told us that the primitive man, like the primitive animal, was great in stature. The bones that the scientists have unearthed have verified this. Maybe human beings a century hence will become either much smaller of much larger than they are today. Everything will have changed.

A century past has given us an unlimited amount of great inventions, the sewing machine, electric irons, electric washing machines, airplanes, automobiles, radium and electricity. The next 100 years will see this process of enlargement carried on until it reaches even greater heights.

It may not be a cheerful picture to paint, but most of us will not be here to see the year 2020 roll around. But we can rest assured time will bring changes and improvements. This is a progressive earth and progress has marked each succeeding year since the beginning.