“I was searching for the perfect mate,” Nannie Doss told police, after she was arrested for murdering her husbands. “The real romance in life.” 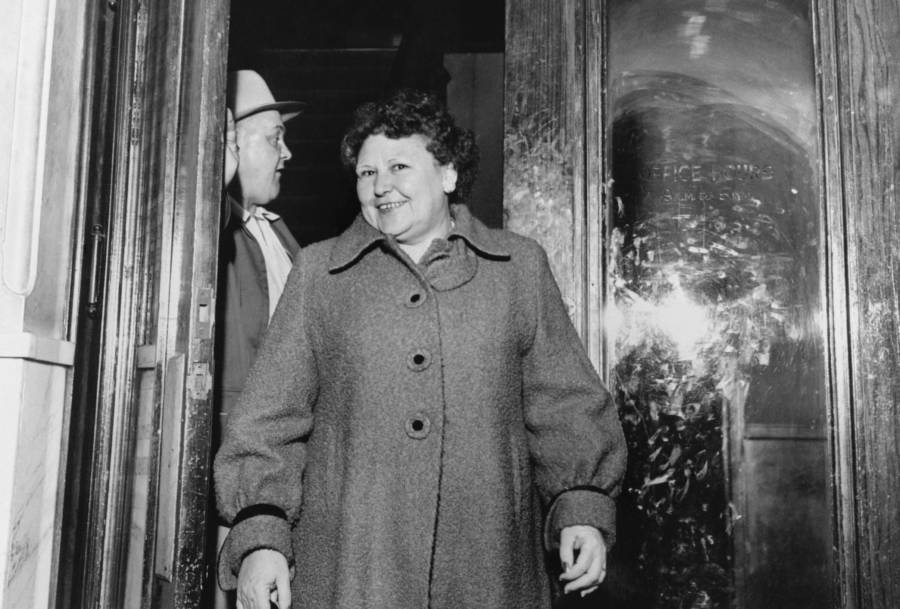 Bettmann/Getty Images After confessing to the murders of four or her five husbands, Nannie Doss leaves the county attorney’s office and heads to her jail cell

Nannie Doss seemed like a sweet lady. She smiled and laughed all the time. She married, had four children, and spent time with her grandchildren.

But behind the happy facade was a trail of death and murder that lasted from the 1920s to 1954. It was then that Nannie Doss confessed to killing four of her five husbands, and authorities believed she may have killed many of her blood relatives as well.

Doss’ story begins with her birth to a family of farmers in 1905 in Blue Mountain, Ala. Instead of going to school, all five of Jim and Louisa Hazle’s children stayed at home to work on household chores and tend to the family farm.

At age seven, Doss suffered a head injury while riding a train. The head injury changed her life forever.

By the time she was a teenager, Doss dreamed of living an idyllic life with her future husband. Reading romance magazines, especially the “lonely hearts” columns, took up much of the young lady’s spare time. Perhaps she used the romance magazines as an escape from her abusive father while her mother turned a blind eye.

Then the marriages began.

At the age of 16, Nannie Doss wed a man she had only known for four months. Charley Braggs and Doss had four children together from 1921 to 1927. The marriage fell apart at that point. The happy couple lived with Braggs’ mother, but she had the same abusive type of behavior as Doss’ father. Perhaps it was her mother-in-law that kickstarted Doss’ murdering spree.

Two children died under mysterious circumstances that same year. One moment the kids were perfectly healthy, and then suddenly they died without an apparent cause.

The couple divorced in 1928. Braggs took his older daughter, Melvina, with him and left a newborn, Florine, with his ex-wife and mother. 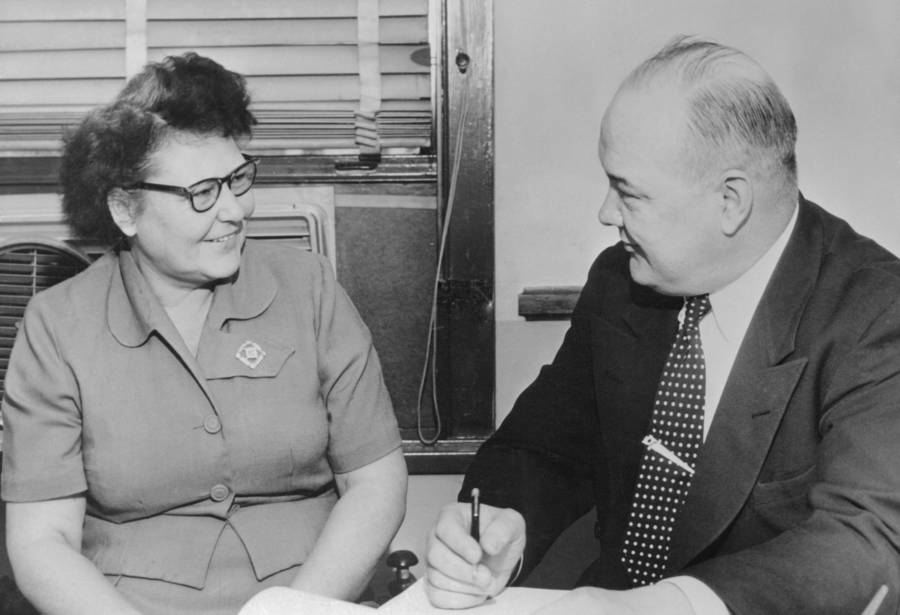 Bettmann/Getty ImagesNannie Doss laughs as she is interviewed by a police captain after confessing to the poisoning of four of her five husbands.

Just a year after her divorce, Doss married her second husband. He was an abusive alcoholic from Jacksonville, Fla. named Frank Harrelson. The two met through a lonely hearts column. Harrelson wrote her romantic letters, while Doss responded with racy letters and photos.

The marriage lasted 16 years until 1945 despite the abuse. During this period, Doss likely killed her own newborn granddaughter a few days after the birth by using a hairpin to stab her in the brain. A few months after the granddaughter’s death, her two-year-old grandson, Robert, died of asphyxiation while in Doss’ care. These two kids belonged to Melvina, Doss’ older child with Braggs.

Harrelson was next on the murderer’s list. Following a night of drunken revelry at the end of World War II, Doss mixed a secret ingredient into his hidden jar of moonshine. He was dead less than a week later on Sept. 15, 1945.

People assumed he died of food poisoning. Meanwhile, Doss collected enough life insurance money from Harrelson’s death to buy a plot of land and a house near Jacksonville.

Arlie Lanning of Lexington, N.C., died in 1952 several years after he responded to a lonely hearts classified ad placed by Doss. Playing the doting wife, Doss added poison to one of Lanning’s meals and he died shortly thereafter. He was a heavy drinker, so doctors attributed the heart attack to alcohol.

Richard Morton of Emporia, Kan. was Doss’ next true love, although he spent a lot of time with other women while married to Doss. However, Doss wouldn’t discover this just yet, because she was distracted with other matters.

Doss’ mother needed a caretaker after she fell and broke a hip in 1953, after her father passed away. The woman died suddenly and without warning a few months after Doss agreed to take care of her. Shortly after her mother’s death, one of Doss’s sisters died suddenly, just after having contact with the Giggling Granny.

Doss was too consumed with her mother’s health to find out about Morton’s affairs. But after she “took care” of her mother and sister, she turned her full attention to her cheating husband.

You know the drill. He died under mysterious circumstances. 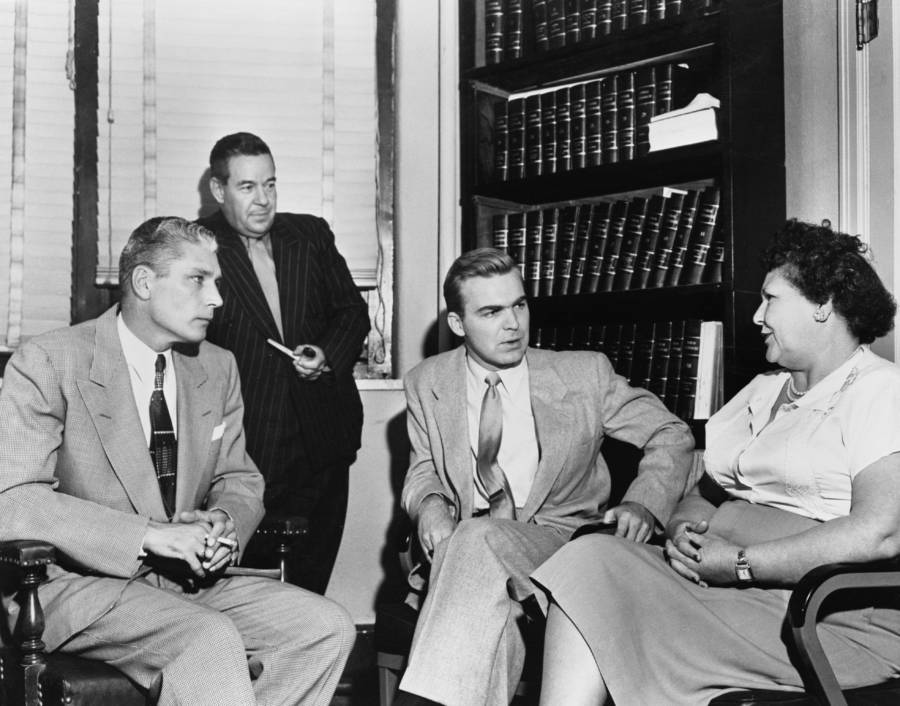 Nannie Doss’ final victim was Samuel Doss of Tulsa, Okla. He was neither a drunk nor abusive. He simply made the mistake of telling his wife that she could only read magazines or watch television shows that were for educational purposes.

She laced a prune cake with poison. Samuel Doss spent a month recovering in the hospital. A few days after he got home, poison-laced coffee finished him off.

This is where Nannie Doss made a mistake.

The doctor who treated her fifth and final husband had suspected foul play during his month-long hospitalization, but he had no proof. So the doctor convinced Doss, who was to receive two life insurance benefits after the fifth husband’s death, to let him perform an autopsy. The physician said it was a good idea because the autopsy would save lives.

The doctor found huge amounts of arsenic in Samuel Doss’s body and alerted police. Nannie Doss was arrested in 1954.

She soon confessed to killing four of her five ex-husbands, but not her family members.

Authorities exhumed some of Doss’ previous victims and found extraordinary amounts of arsenic or rat poison in their bodies. It turns out that a common household ingredient at the time was a potent way to kill people and without anyone suspecting a thing. The Grinning Granny’s calling card was to poison her loved ones with drinks or food spiked with huge amounts of poison.

In all, authorities suspect she killed as many as 12 people, most of whom were blood-related.

Doss blamed her murderous escapades on her brain injury. Meanwhile, journalists gave her the nickname Giggling Granny because every time she would tell the story of how she killed her late husbands, she laughed. 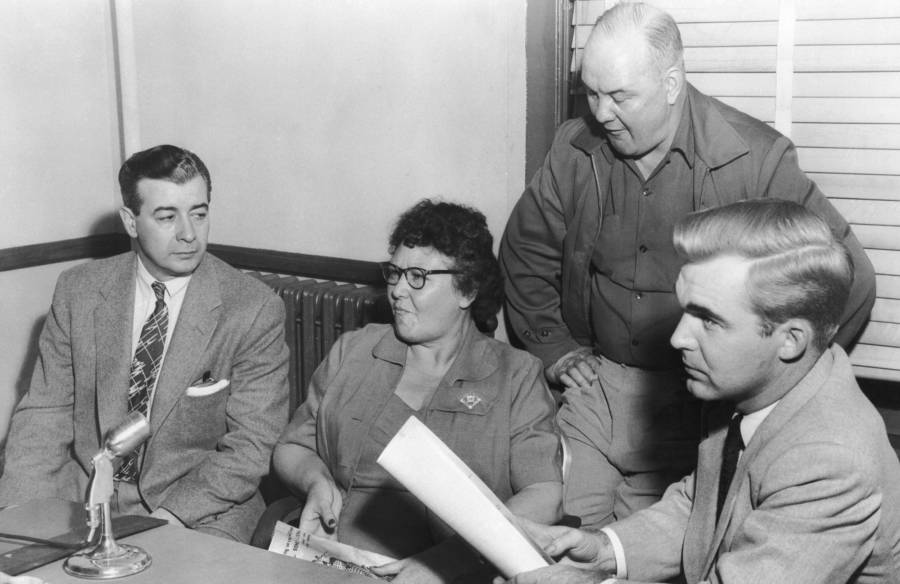 Bettmann/Getty ImagesNannie Doss breaks into a smile after signing a statement for Tulsa officers admitting she killed four of her five husbands with rat poison.

Doss even had a surprising motive for killing her male companions. She wasn’t after insurance money. In her own words, Doss’ romance magazines had a profound effect on her psyche. “I was searching for the perfect mate, the real romance in life.”

When one husband became too much, Doss simply killed him off and move to the next love… or victim, that is. Since most of her husbands had other underlying health issues, such as alcoholism, doctors, and authorities never suspected a thing.

Nannie Doss died in prison in 1964 while serving a life sentence for the murder of her last husband.

Have something interesting to say about Nannie Doss? Tell us below!

After reading about Nannie Doss the Giggling Granny, read about Leonarda Cianciulli, who turned her murder victims into soap and teacakes. Then, read about Elisabeth Fritzl, who spent 24 years held captive by her father.