In the world before online and speed dating, the pages of the local paper were the best chance of meeting up with a significant other. However, almost 100 years ago it seems lonely hearts were no less fussy when looking for a match.

A lonely heart advertisement placed into the pages of the Dundee Courier in 19249 saw England’s oldest woman an scouring the country in search of a very particular gentleman. Thought to be the oldest woman in the country at the time, Mrs Betsy Pennick, a widow of 106, was looking for a husband with a good financial position. 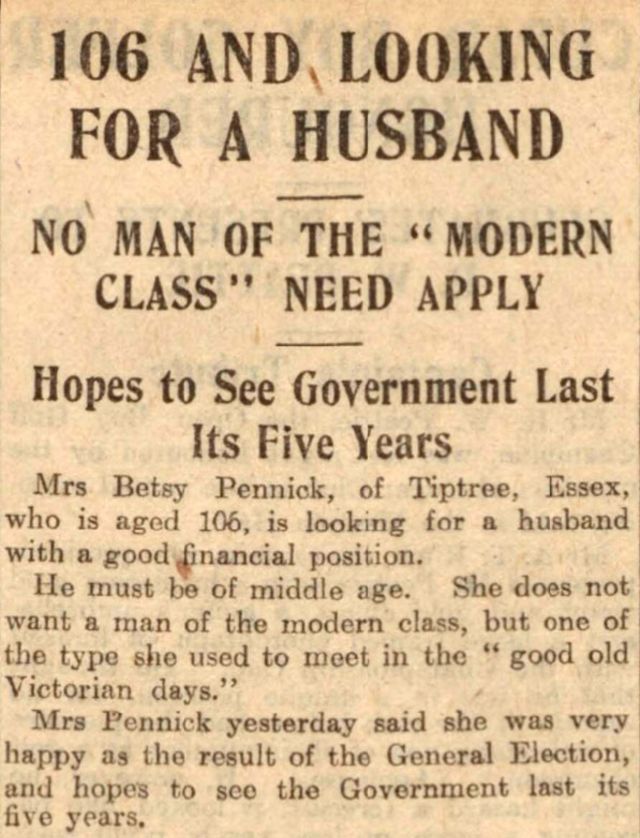 However, this was not thee only requirement to win the Essex lady’s heart as she stated in no uncertain terms that she wanted a middle-aged gentleman and “no modern man.”

Her advertisement on Saturday November 1, 1924 read: “She does not want a man of the modern class, but one of the type she used to meet in the ‘good old Victorian days’.”

She was also a supporter of the Conservative Party and spoke of her joy at thee outcome of the general election the previous month, in October 1924, which saw the party, led by Stanley Baldwin, obtaining a large majority.

The general election came about after the previous Labour minority led by Ramsay MacDonald suffered defeat in the House of Commons following a vote of no confidence.

Mrs Pennick’s Courier advert stated she was “very happy” at the outcome and hope doped to see the government last its five years.

However, it seems her ho hope and hunt for a man were unsuccessful as she passed away just a few months later. The death of England’s oldest woman was reported in the Evening Telegraph newspaper on Tuesday, March 24, 1925. 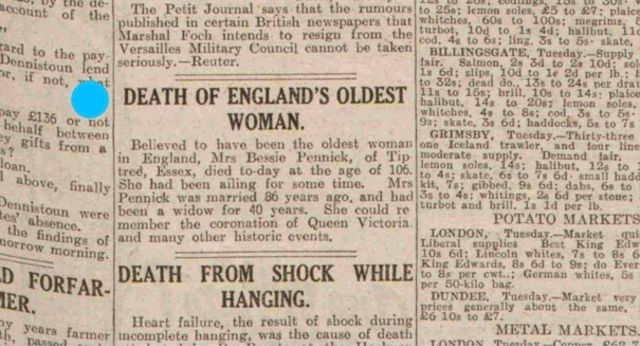 The article noted she ha had been “ailing for some time” before her death and had been a widow for 40 years yea after marrying her husband 86 years before.

It also said she could recall the coronation of Queen Victoria and other historic events.