Back in 1942, when making a bad cup of tea may have been grounds for a divorce…

By the time of this ad in 1942, it seems the advertisers recognized that consumers had gotten much more sophisticated where ads were concerned. Readers of McCall’s magazine, where this ad was found, would have known that the advertiser was merely trying to sell their product and would make general claims about how theirs was the best. So there had to be a new way to get noticed and reach the consumer.
This ad does so by beginning with a claim that is so outlandish and fake, that when the second much more subdued claim is made it will seem true in comparison. The cartoon in this ad begins, 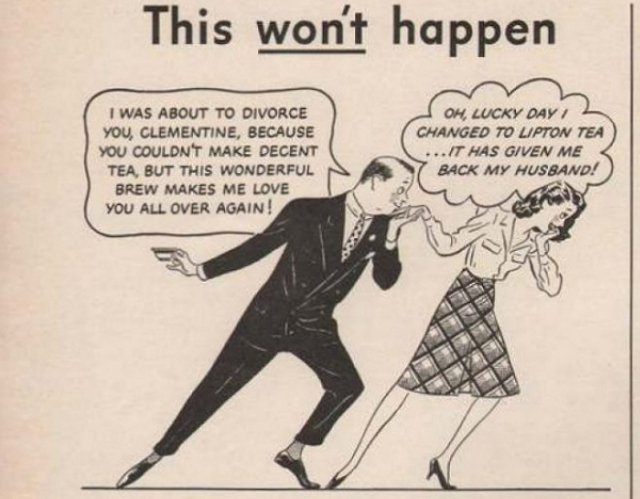 HUSBAND: “I was about to divorce you, Clementine, because you couldn’t make decent tea, but this wonderful brew makes me love you all over again!”
WIFE: “Oh, lucky day I changed to Lipton Tea… it has given me back my husband!”

However, this would never happen, so the ad preempts any doubt on the readers part by admitting right up front, “This won’t happen.”
So when the cartoon goes on to say that instead, the following will happen, 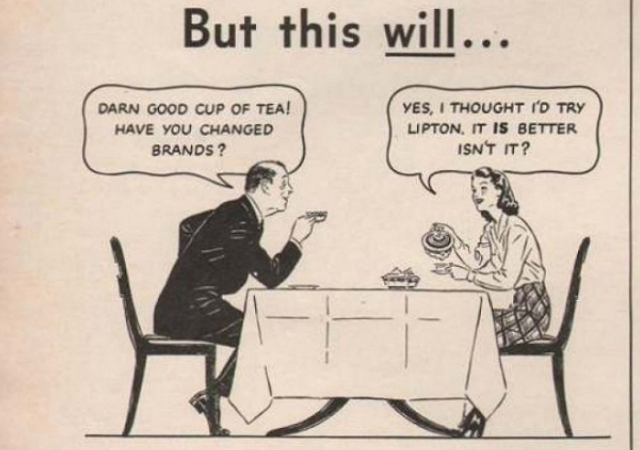 HUSBAND: “Darn good cup of tea! Have you changed brands?”
WIFE: “Yes, I thought I’d try Lipton. It is better isn’t it?”

It sounds so much more believable that the reader is willing to accept it as true. The woman reading the ad also sees that the advertiser recognizes that she is sophisticated enough to see through their lies, which is meant to make her feel good, too.
So in the end, even though the method of getting the message across has changed, advertisers in the 1930s and 1940s are still able to make the point that buying their product will keep your husband happy and help you to be a better wife to him. They just have become less obvious about it.
Regardless, for us here many years later, we can enjoy this vintage ad from a long-gone era. Lipton Tea is still around, however, and going strong, and for many of us it is a product we do still enjoy.
If you notice, there is a rebus of sorts here, too. The funny thing is that instead of replacing the word with a picture, as in a traditional rebus, they provide both the picture and the word! The little pictures almost look like the precursors to today’s emoji. 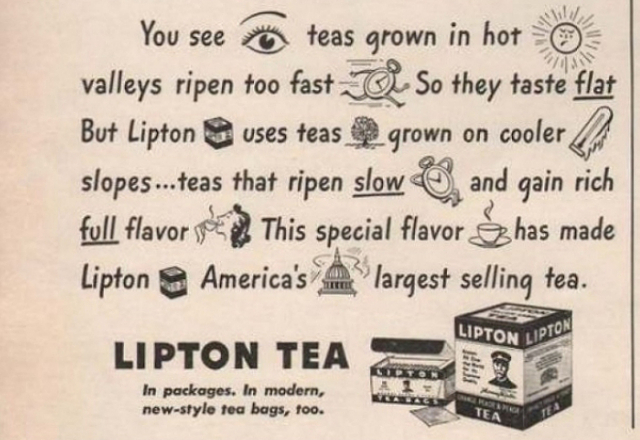