It’s one of the most famous behind the scenes photos from the entire Star Wars canon, if not all of cinema: Carrie Fisher, wearing her iconic “Slave Leia” bikini, sunbathes alongside her identically dressed body double Tracy Eddon on the set of Return of the Jedi. 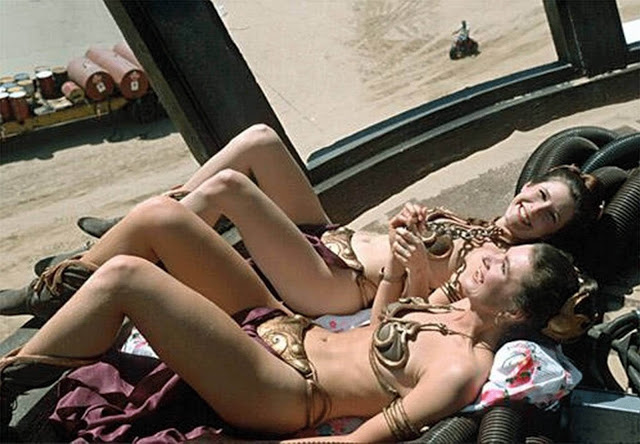 “I think men like that,” Fisher told Yahoo Movies when we asked what she remembered about that moment, captured in 1982 on the film’s sun-drenched Arizona set that stood in for Luke Skywalker’s native desert planet of Tatooine. “Naughty, naughty men.”

Fisher explained the circumstances: “It was very, very hot,” she said (naughty men: you can say that again). “It was Yuma, Arizona! There was nothing to do. We were out of the middle of the desert where it was just sand, except for the Sarlacc pit, which if you look at it is absurd and reminiscent of things that you don’t want to reminisce about if you’re me.

“So there was nothing to do. Very hot. But we were in the best clothing for that. And so maybe [we did] a little [tanning].”

Fisher said it was also the most comfortable position they could find given the climate and costumes. “It was a way to lay down. You don’t want to sit. There were creases, legs bent, sweat. I don’t like sweating, I don’t know about you.”

No, who likes sweating?

“OK, well it was a no-sweat position.”