Maxell cassette tape in 1980 created the all-time iconic music image that will last far into the future, the “Blown Away Guy.” 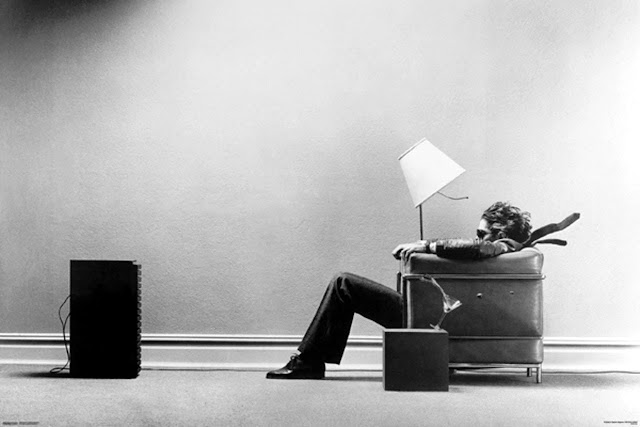 In the 1980s, Maxell became an icon of pop culture when it produced advertisements popularly known as “Blown Away Guy” for its line of audio cassettes. The campaign began as a two-page advertising spread in Rolling Stone magazine in 1980. The photo shows a man sitting low in a (Le Corbusier Grand Confort LC2) high armed chair in front of, and facing, a JBL L100 speaker. His hair and necktie, along with the lampshade to the man’s right and the martini glass on the low table to the man’s left, are being blown back by the tremendous sound from speakers in front of him — supposedly due to the audio accuracy of Maxell’s product. The man is shown desperately clinging to the armrests but defiantly looking ahead at the source of the music through sunglasses, though calmly catching his drink before it slides off the end table.
The ad campaign was conceived by Art Director Lars Anderson. Steve Steigman was the photographer. Steigman wanted a male model with long hair in order to show the effect of the wind, but when such a model could not be found on the day of the shoot, they used the makeup artist who was hired for the shoot, Jac Colello.
The same concept was used for television spots in 1981 which ran throughout the 1980s. These commercials showed showed nearly the same image as the print ad, but with the chair, a drink and nearby lamp all being pushed away from the stereo by the strong force of the sound waves. Richard Wagner’s “Ride of the Valkyries” was used for music.
A separate ad was filmed for the United Kingdom, with musician Peter Murphy of the group Bauhaus as the man in the chair, and “Night on Bald Mountain” by Modest Mussorgsky as the music.
The “Blown Away Guy” image became quite popular, and has been copied and parodied numerous times, including in the 1992 John Ritter film Stay Tuned, in the 2005 episode “Model Misbehavior” of animated sitcom Family Guy, and in the 2010 movie Jackass 3D.