During Steamboat Bill Jr’s infamous tornado scene, the front of a house falls down on top of Buster Keaton – but he’s standing in exactly the right place for the open upstairs window to save him. Back in the days of the silent movies, they did stunts for real; Keaton had to stand on a precise mark or risk being crushed to death. That’s an actual house falling down, not a lightweight facade.

Ninety years on, it still looks impossible. And dangerous. Minutes before shooting, Keaton noticed a few crew members praying. He also saw the cameraman turn away as the shot rolled. Buster later called the stunt one of his “greatest thrills,” then added, “I was mad at the time, or I would never have done the thing.”

First and foremost, just like almost all of Keaton’s shorts and films during the heyday of his career, he was the creative force behind it all. The comedic actor even proclaimed that the credited screenwriter of Steamboat Bill Jr. was “useless” and was only there because he was on the payroll.
For a performer who had built a cinematic career on dangerous stunts, this scene would perhaps be his most dangerous. Before shooting, the crew had to be exact in marking off where the two ton structure would be falling, and the exact spot for “Old Stone Face” to stand so he would not be crushed. According to Hollywood legend, Keaton’s shoes were nailed down to the spot so that he would not be tempted to move even slightly off cue and risk his life. 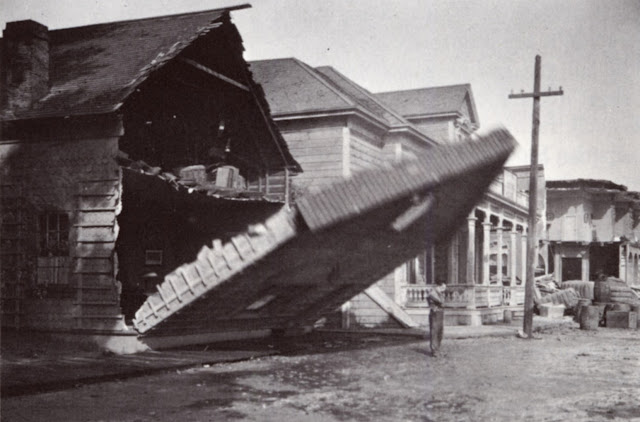 Though Buster Keaton had done may stunts before, in the shooting of this scene for Steamboat Bill Jr., his head was far from the right place. His alcoholism had been increasing, coinciding with his marriage falling apart. While battling these personal demons, he learned his business partner Joseph M. Schenk had sold their production company to MGM, in effect taking away all of his creative freedom.
According to those who knew Buster at this time, in his heart of hearts he went along with this dangerous feat because he had just given up and did not care what happened to him. As it stands the house falling has become one of the greatest gags in movie history. It has duplicated countless times in different movies and TV shows and it all originated with one of cinema’s original funny men.