In the early 20th century this particular brand of cigarettes, Ogden’s Guinea Gold, primarily targeted men. In fact, a campaign featuring highly ranked colonels, majors and even Lords is chief among the brand’s early advertising efforts. This advertisement, however, targets the New Woman of the Victorian era, who seek the independence and freedom afforded only to men at the time. 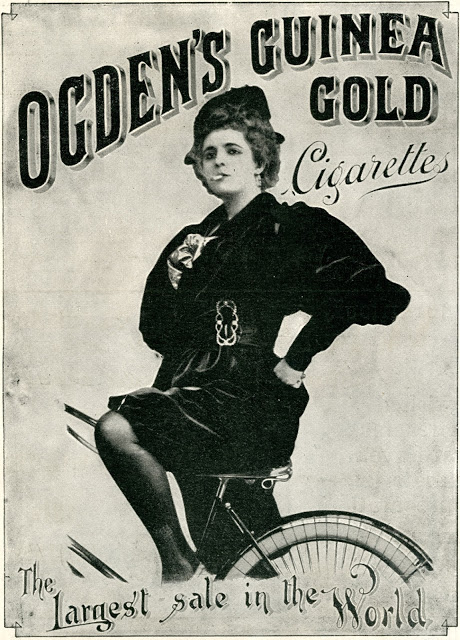 The woman depicted in this image sits proudly and confidently on a bicycle, a lit cigarette in her mouth and both hands on her hips. Though she wears a modest, heavy, dark velvet dress with puffed sleeves, her outfit is anything but prim and proper. Instead, she wears either a divided skirt fashioned originally for horseback riding and then for bicycle riding or perhaps rationals, the baggy pants worn by liberated women of the time. She represents the New Woman who is, quite literally, going places on her own.
Bicycles were thought to metaphorically represent such freedom, as can be gathered from the contemporary novel novel Paris, by Émile Zola (1898). In this novel, the character Pierre asks, “So women are to be emancipated by cycling?” and Marie responds, “Well why not? It may seem a droll idea; but see what progress has been made already!” The act of straddling a bicycle was itself sometimes attributed to the rupturing of the hymen, and was thought by some to be indecent for proper women. The woman in this ad displays an air of rebellion and imprudence which would appeal to the type of woman who might smoke a cigarette in the early 1900s, when smoking was a habit reserved principally for men.
(via Stanford Research into the Impact of Tobacco Advertising)