Praljak was at The Hague along with five other former Bosnian Croat political and military leaders to appeal convictions of war crimes made against them.

The atrocities that occurred in the Western Balkan region after the dissolution of Yugoslavia in the 1990s have haunted Europe to this day.

Earlier today, while in court appealing his war crimes conviction at the a United Nations’ tribunal in The Hague, Bosnian Croat general Slobodan Praljak drank from a vial of poison, killing himself, reported The Guardian.

Immediately after the international criminal tribunal for the former Yugoslavia (ICTY) decided to uphold the 72-year-old general’s sentence to 20 years in prison, he shouted, “Praljak is not a criminal. I reject your verdict.”

He then placed a small brown vial to his lips and drank it saying, “I just drank poison. I am not a war criminal. I oppose this conviction.”

The presiding judge, Carmel Agius, immediately ordered the proceedings be suspended and closed the courtroom to the public.

An ambulance arrived at The Hague within minutes to carry Praljak out, and a helicopter circled the building.

Though Praljak is not visible in the video following his swallowing of the poison, Croatian prime minister Andrej Plenković confirmed the general’s death and offered condolences to his family.

Praljak was at The Hague along with five other former Bosnian Croat political and military leaders to appeal convictions of war crimes made against them.

He was previously convicted of numerous counts of breaching the Geneva convention, violating the laws or customs of war, and crimes against humanity during the Croat–Bosniak War.

Part of the larger conflict between ethnic and national groups following the dissolution Yugoslavia, the Croat–Bosniak War arose out of disagreements between Croat and Bosniak militaries who had previously joined forces to fight Serbian nationalists. 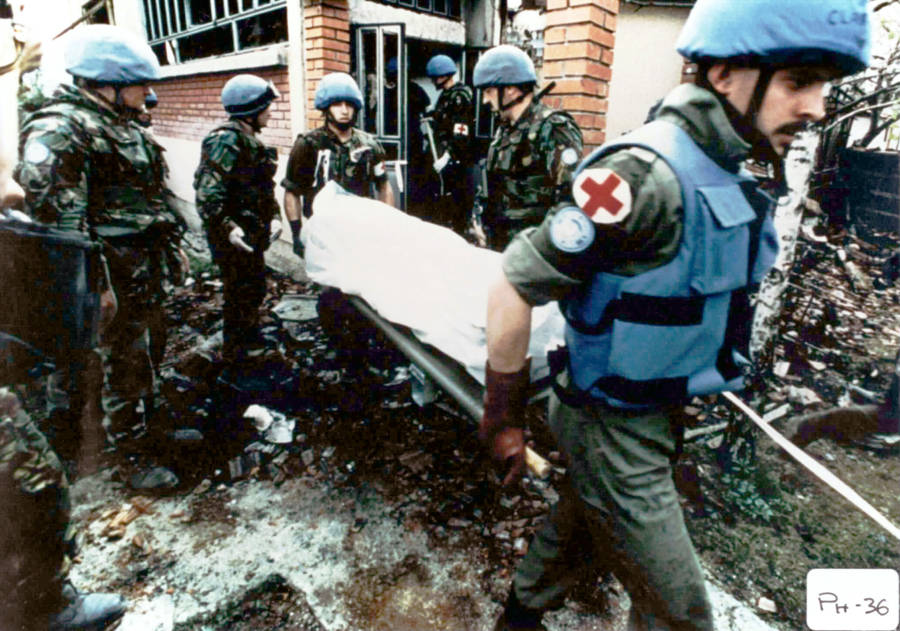 ICTYUN peacekeepers collecting corpses after a massacre of Bosniaks by the Croat HVO army in 1993.

Praljak’s crimes are related to his command of the Croat HVO armed forces, who persecuted Bosniak Muslims, engaging on a campaign of terror against the ethnic group where they raised villages and imprisoned, raped, and killed civilians.

While the tribunal accepted some of Praljak’s appeals, including overturning previous convictions related to his destruction of a 16th-century Ottoman bridge important to the Muslim population in the region, they upheld his original sentence.

Praljak’s Bosnian-Croat army was backed by Croatian nationalist leader Franjo Tudjman, who died in 1999, before the final indictments for these war crimes were issued by the ICTY in December 2004.

Tudjman’s son, Miroslav, said Praljak’s actions were the “consequence of his moral position not to accept the verdict that has nothing to do with justice or reality.”

Nick Kaufman, a former prosecutor at the ICTY, said, “When deprived of authority over the masses and the attention which formerly fueled their ego and charisma, such defendants can often be extremely resourceful with the little power they retain.”

Next, learn about the “Miss Besieged Sarajevo” beauty pageant that took place during The Bosnian War. Then, read how a woman killed 15 of her in-laws in a failed attempt to poison her husband.