Experience the most outrageous stories and photos from the Weathermen a.k.a. the Weather Underground, the Vietnam War-era radicals that made their protests with bombs. 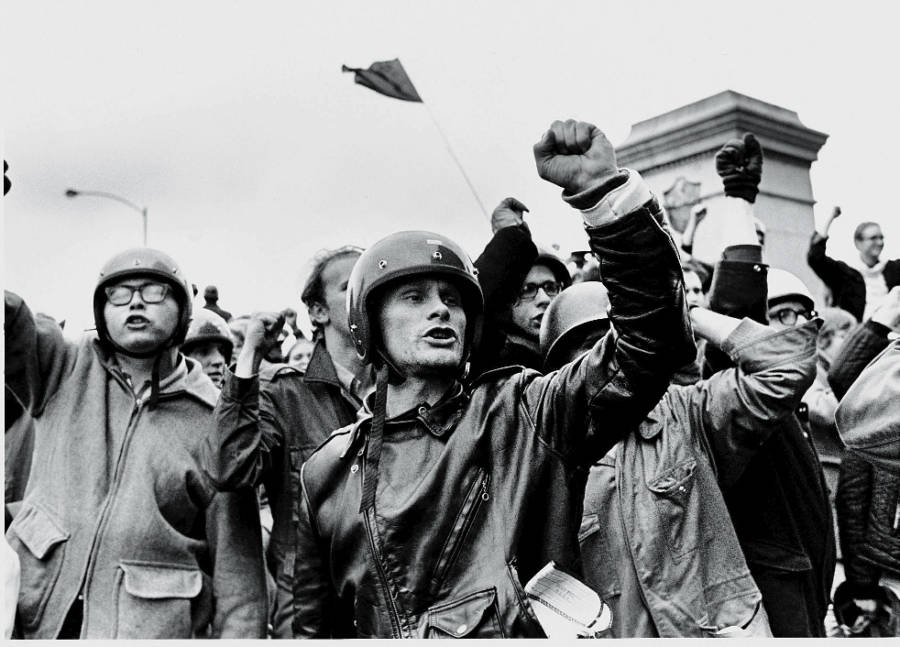 David Fenton/Getty ImagesYoung men raise their fists during the “Days of Rage” anti-Vietnam War demonstrations organized by the Weather Underground a.k.a. the Weathermen in Chicago. Oct. 11, 1969.

“Our intention is to disrupt the empire… to incapacitate it, to put pressure on the cracks.” — From the Weather Underground’s 1974 manifesto, “Prairie Fire”.

In March of 1970, a bomb went off in the basement of a Greenwich Village, New York townhouse. Three people died — but completely innocent people they were not.

Diana Oughton and Terry Robbins had accidentally detonated the nail bomb they were constructing. The bomb was destined to destroy either Columbia University’s library or an army dance hall at Fort Dix. Instead, it destroyed them and another accomplice named Ted Gold. Two other accomplices, Kathy Boudin and Cathy Wilkerson, survived and escaped.

All were members of the Weather Underground, a.k.a. the Weathermen, a radical left-wing group that made their explosive mark on American history in the years surrounding the Greenwich Village blast. 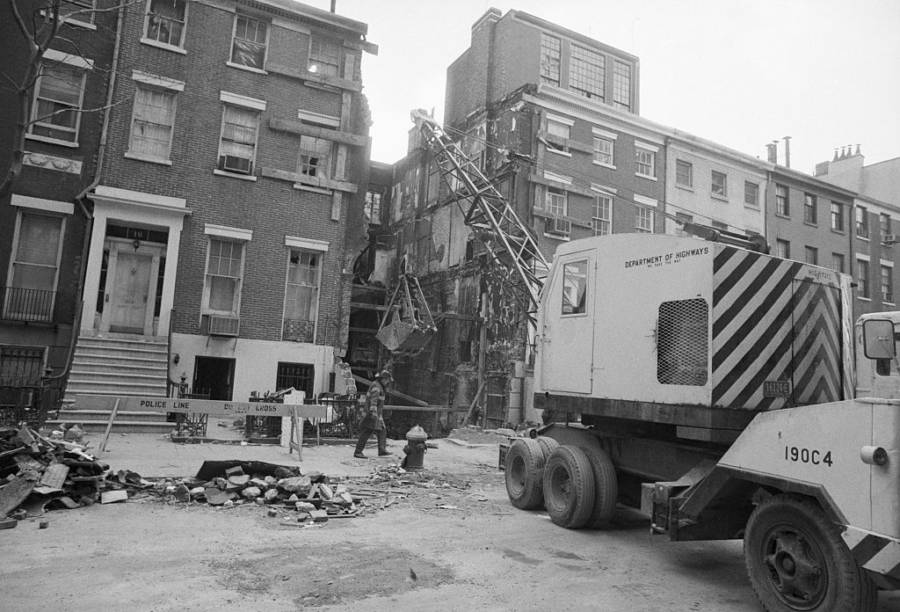 Bettmann/Getty ImagesThe townhouse at 18 West 11th Street in New York’s Greenwich Village was completely destroyed by the bomb that exploded on March 6, 1970. In the days following the explosion, police found 57 sticks of dynamite, four completed bombs, detonators, timing devices, and other bomb-making equipment. 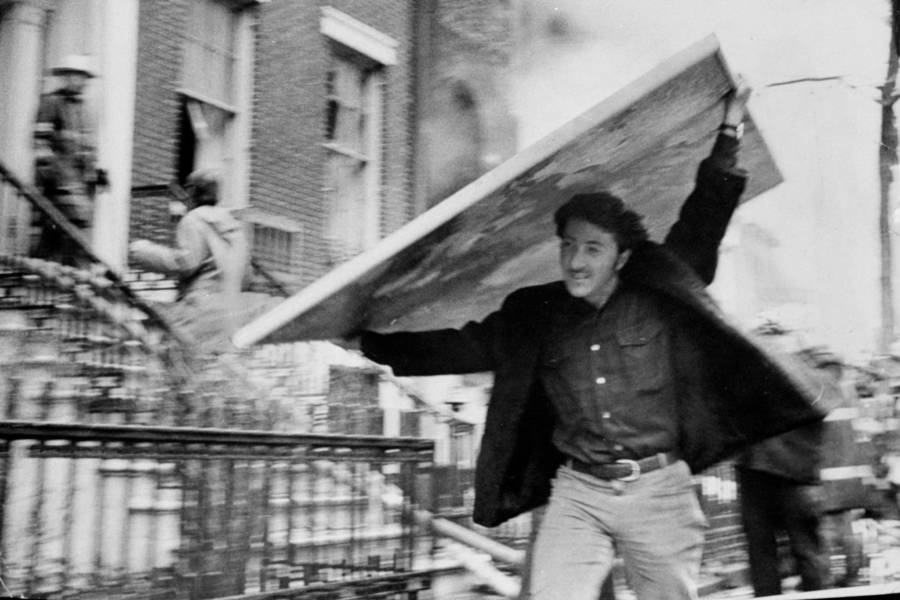 Frank Castoral/NY Daily News Archive via Getty ImagesDustin Hoffman, who was living in the townhouse adjacent to the one that exploded, hurries away from his home with a painting he was able to save just after the blasts.

The Weathermen grew out of the turbulent American political climate of the late 1960s to become a volatile faction of anti-war radicals who were willing to use violence as a means to end the Vietnam War, fight evils such as corporate greed and racism, and even overthrow the U.S. government itself.

The organization formed in 1969 as an offshoot of the Students for a Democratic Society (SDS), a left-wing activist group that took their name from lyrics of Bob Dylan’s “Subterranean Homesick Blues”: “You don’t need a weatherman to know which way the wind blows.” Fueled by their anger over the Vietnam War, the assassination of Martin Luther King Jr., and police raids against the Black Panthers, they demanded attention and change. And to get what they wanted, they were willing to plant bombs. 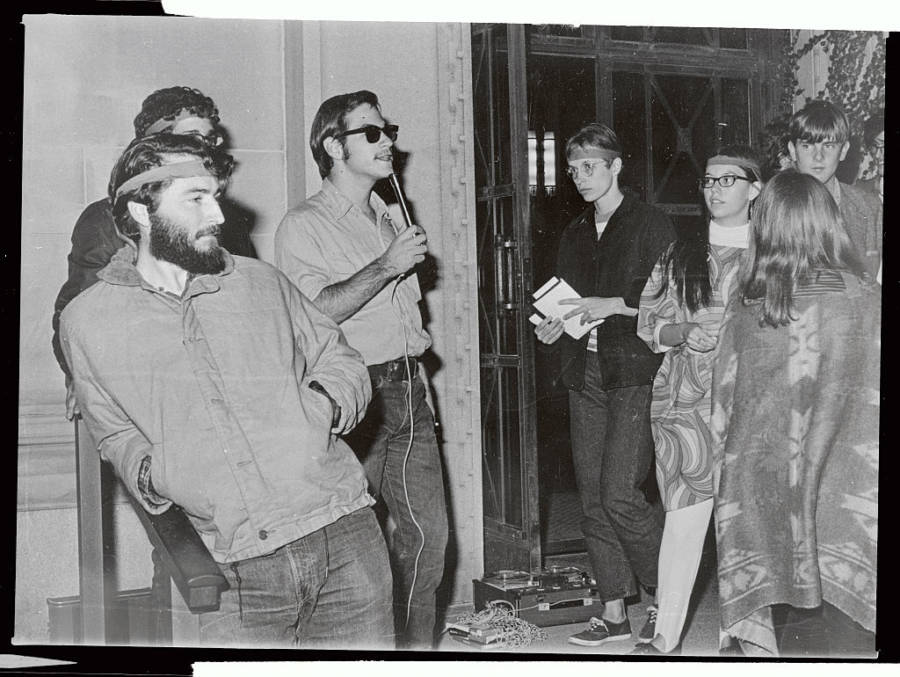 Bettmann/Getty ImagesDiana Oughton (center, holding papers) waits her turn to speak at a rally on the steps of the Rackham Building on the University of Michigan campus. Date unspecified.

During the Weathermen’s eight years of operation, the U.S. Capitol building, the Pentagon, and other pillars of American government and law enforcement became targets of the radical group’s bombings. While they did warn of the locations of their blasts beforehand so that people could be evacuated, there was never any guarantee that casualties would be totally avoided. Ironically, the only people killed by their bombs were their own members.

Beyond bombings, the Weathermen organized some of the era’s most noteworthy protests. In October of 1969, for example, they called for a riot in Chicago in an anti-war event dubbed “Days of Rage.” In the end, “Days of Rage” mainly entailed protesters wearing protective gear pounding on cars and breaking store windows — and left many demonstrators arrested en masse. All in all, nearly 300 Weathermen were arrested thanks to “Days of Rage.” 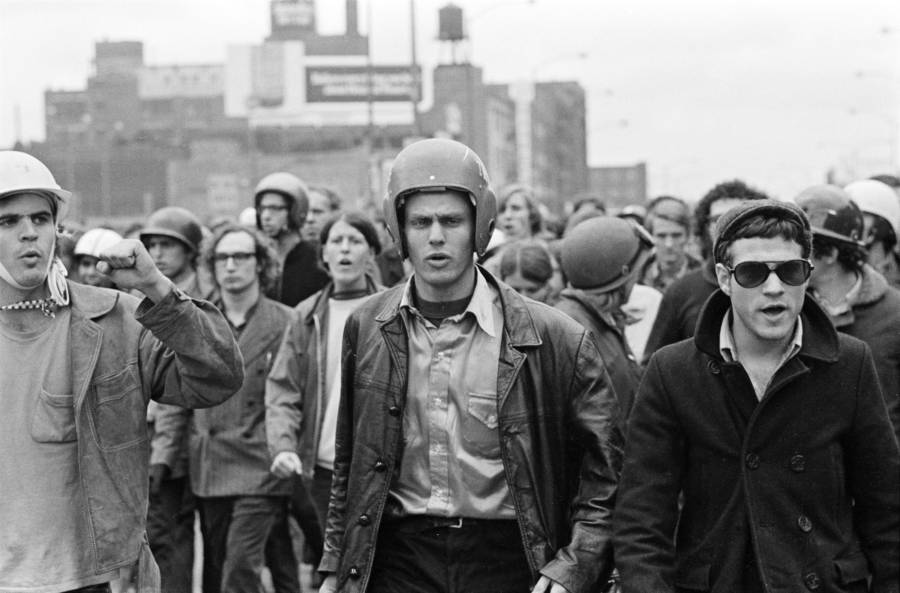 David Fenton/Getty ImagesLeaders of the Weathermen (left to right) Peter Clapp, John Jacobs, and Terry Robbins march during the “Days of Rage” protests in Chicago. Oct. 11, 1969. 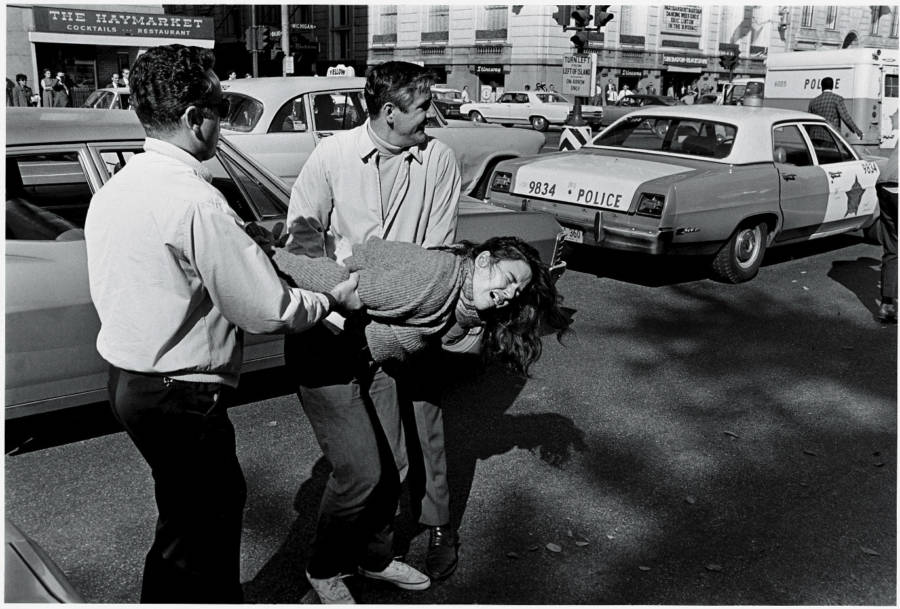 David Fenton/Getty ImagesA young protester is hauled away by plain-clothes policemen during the “Days of Rage” protest.

Several months after “Days of Rage,” following the Greenwich Village explosion, the Weathermen largely went underground. They proceeded to target empty areas of buildings for their bombings while continuing to provide advance warning of their targets and keeping their bombs small. Nevertheless, 1970 was their most active year, as the group detonated nearly half of the 25 total bombs they’re believed to have ever detonated in that year.

Soon, leaders within the Weather Underground found themselves on the FBI’s Most Wanted list with posters in virtually every post office in America. In fact, the FBI seemed obsessed with capturing the Weathermen, exaggerating the overall threat to the public, diverting hundreds of agents to the case, and using extraordinary resources in their hunt. Despite all this, the FBI never permanently put any of the Weather Underground’s leaders behind bars. 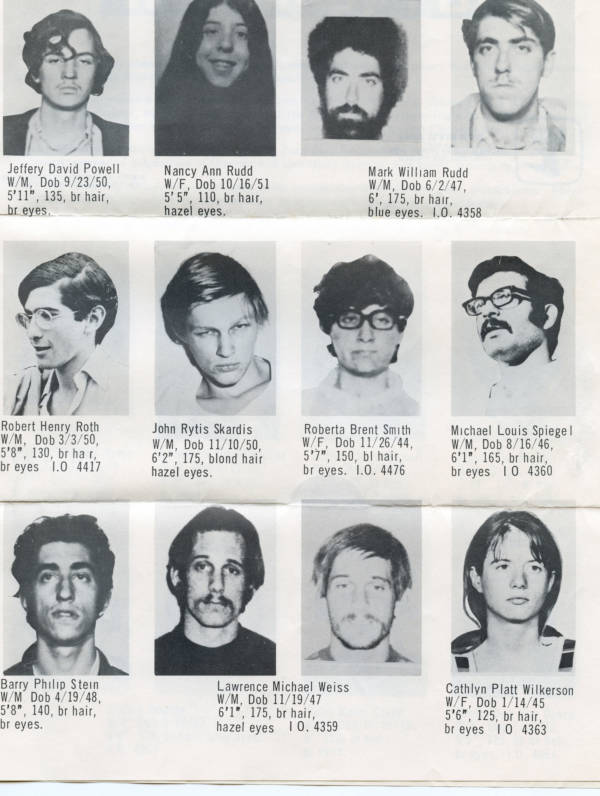 washington_area_spark/FlickrAn FBI wanted poster of 28 alleged members of the Weather Underground Organization circa 1972.

Meanwhile, the Weathermen’s activities continued throughout 1970 as the group detonated bombs in the National Guard Association building, the Marin County, Calif. courthouse, a Queens, N.Y. traffic-court building, and a Long Island City, N.Y. courthouse. But when they tried to bomb the First National City Bank of New York, five members were arrested.

Despite police pressure, a Women’s Brigade sub-faction of the Weather Underground soon formed and grew to be 70 members strong. Their first major item of business was bombing The Harvard Center for International Affairs in October of 1970.

Soon after, the Weather Underground bombed the U.S. Capitol on March 1, 1971 as a rebuttal to America’s part in the invasion of Laos. Then, following blasts at two offices of the Office of California Prisons and the New York Department of Corrections in Albany, the group bombed the Pentagon on May 19, 1972, reputedly in retaliation for America’s indiscriminate bombing in Vietnam.

So it was that the popular Vietnam-era mantra of “make love, not war” was only half true for the violent, often warlike Weathermen. As for the love half of the equation, while the Weathermen were carrying out violent acts, the onset of the sexual revolution did play a big part in the group’s dynamics: free love among the activists was very prevalent; monogamy was considered to be counterrevolutionary and was highly discouraged. 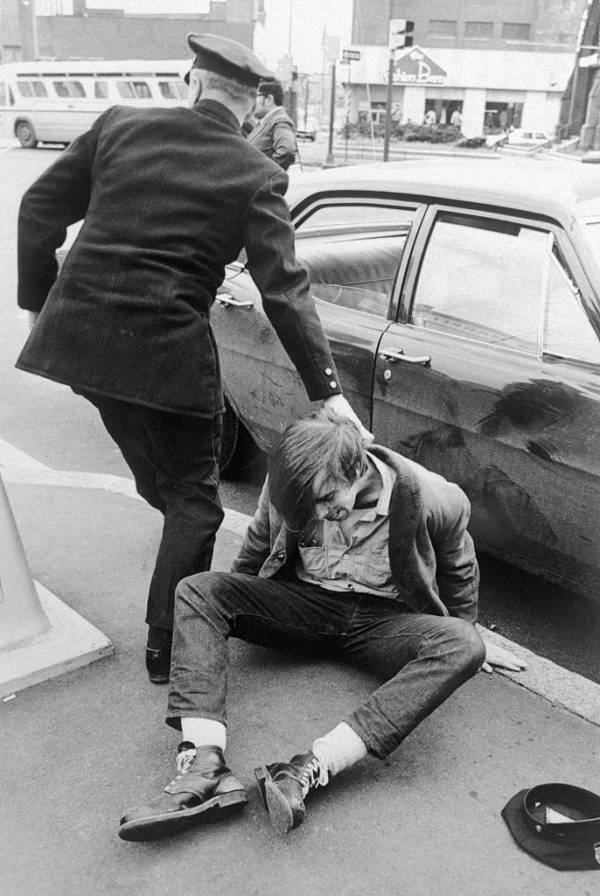 Bettmann/Getty ImagesAn officer dragging off one of the militant Weathermen, Eric Mann, who was arrested and charged with conspiracy to murder, assault with intent to murder, threatening violence, and promotion of anarchy. Cambridge, Mass. Nov. 19, 1969.

But it wasn’t too long before the Weather Underground — in all their “make love and war” glory — faded away.

On Jan. 29, 1975, they detonated a bomb at the headquarters of the U.S. State Department in response to American military escalation in Vietnam. No injuries occurred but the damages impacted three floors of the building.

Between 1977 and 1980, former Weathermen who’d been keeping a low profile began emerging and even turning themselves in. Because the FBI had repeatedly violated the law when gathering evidence against the Weather Underground years ago, most escaped conviction and were given only fines and probation.

Despite such light consequences, the Weatherman’s violent tactics remained widely criticized in subsequent years, during which former members lived to see less militant groups help effect change on issues once important to the Weathermen, including civil rights, gay rights, and increased gender equality. 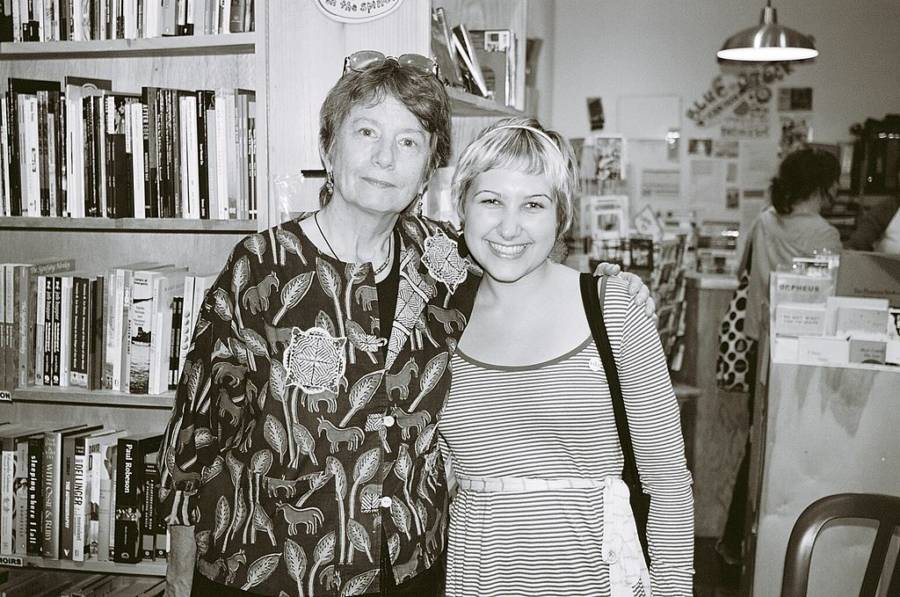 Thomas Good/NLN via Wikimedia CommonsCathy Wilkerson (left) at Bluestockings Bookstore in New York in order to promote her book Flying Close to the Sun: My Life and Times as a Weatherman.

Some Weather Underground members didn’t reemerge for years. Cathy Wilkerson, one of the two Greenwich Village explosion survivors, came forward ten years after the incident. Unlike so many others, Wilkerson did actually serve prison time. Following her release, she started teaching math and released her memoir, Flying Close to the Sun: My Life and Times as a Weatherman.

In it, Wilkerson tried to explain the thought process behind the tactics she and the Weather Underground used to fight a corrupt government. “I made a series of decisions, from a standpoint of rage, hopelessness, and fear” she wrote, “in which I accepted the same desanctification of human life practiced by Richard Nixon, Henry Kissinger, and William Westmoreland. I accepted their supposition that, in the end, violence is the only effective strategy for social change … I abandoned myself to the sanctimoniousness of hating my enemies.”