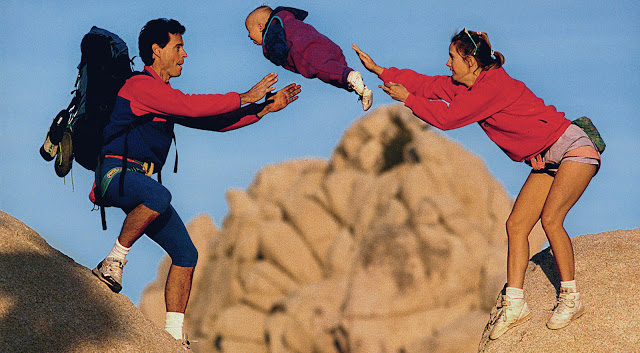 That baby, named Jordan Leads, is now 28 years old. The picture was taken back in 1991 after Greg Epperson, a rock climbing photographer, asked her parents if they wanted to participate in the stunt. Everything worked out and Leads landed safely in her father’s arms.

The photo remained under wraps until it was released four years later as part of a Patagonia catalog. Recently, the picture was re-released for a current Patagonia catalog, along with a life update about the infamous flying baby.

Currently, Jordan Leads is studying to be a court reporter, living in Las Vegas. She claims the photo remained one of the many outdoorsy photos that peppered the walls of her childhood home. With the rise of social media, it wasn’t long before the image was turned into a meme, which Leads found to be particularly humorous.

While she finds many of them funny, states that her favorite is the one “where my parents are feeding me to a Jurassic Park dinosaur. I think that’s the best.” Leads’ parents, Jerry and Sherry, never received any real backlash for tossing their child. She’s happy about that and hopes even to re-create the photo with her own child someday.

“I can’t wait to show it to my kids one day and to show them how I was growing up, how my parents raised me and to really just bring that whole family value of going outside back to them,” Leads told NPR. “I would put [my photo] up on the wall, and then I could put my child’s right next to it in our hallway … I think that would be really cool.”