This post was originally published on this site
0
SHARES
ShareTweet
The Radium Girls were female factory workers who contracted radiation poisoning from painting watch dials with self-luminous paint.
From 1917 to 1926, U.S. Radium Corporation, originally called the Radium Luminous Material Corporation, was engaged in the extraction and purification of radium from carnotite ore to produce luminous paints, which were marketed under the brand name “Undark”. The ore was mined from the Paradox Valley in Colorado and other “Undark mines” in Utah. As a defense contractor, U.S. Radium was a major supplier of radioluminescent watches to the military. Their plant in Orange, New Jersey, employed as many as three hundred workers, mainly women, to paint radium-lit watch faces and instruments, misleading them that it was safe.
U.S. Radium Corporation hired approximately 70 women to perform various tasks including handling radium, while the owners and the scientists familiar with the effects of radium carefully avoided any exposure to it themselves; chemists at the plant used lead screens, masks and tongs. U.S. Radium had distributed literature to the medical community describing the “injurious effects” of radium. In spite of this knowledge, a number of similar deaths had occurred by 1925, including the company’s chief chemist, Dr. Edwin E. Leman, and several female workers. The similar circumstances of their deaths prompted investigations to be undertaken by Dr. Harrison Martland, County Physician of Newark.
An estimated 4,000 workers were hired by corporations in the U.S. and Canada to paint watch faces with radium. At USRC, each of the painters mixed her own paint in a small crucible, and then used camel hair brushes to apply the glowing paint onto dials. The then-current rate of pay, for painting 250 dials a day, was about a penny and a half per dial (equivalent to $0.303 in 2020). The brushes would lose shape after a few strokes, so the U.S. Radium supervisors encouraged their workers to point the brushes with their lips, or use their tongues to keep them sharp. Because the true nature of the radium had been kept from them, the Radium Girls painted their nails, teeth, and faces for fun with the deadly paint produced at the factory. Many of the workers became sick; it is unknown how many died from exposure to radiation.
Among the first to see numerous problems among dial painters were dentists. Dental pain, loose teeth, lesions and ulcers, and the failure of tooth extractions to heal were some of these conditions. Many of the women later began to suffer from anemia, bone fractures, and necrosis of the jaw, a condition now known as radium jaw. The women also suffered from suppression of menstruation, and sterility. It is thought that the X-ray machines used by the medical investigators may have contributed to some of the sickened workers’ ill-health by subjecting them to additional radiation. It turned out at least one of the examinations was a ruse, part of a campaign of disinformation started by the defense contractor. U.S. Radium and other watch-dial companies rejected claims that the afflicted workers were suffering from exposure to radium. For some time, doctors, dentists, and researchers complied with requests from the companies not to release their data.
In 1923, the first dial painter died, and before her death, her jaw fell away from her skull. By 1924, 50 women who had worked at the plant were ill, and a dozen had died. At the urging of the companies, worker deaths were attributed by medical professionals to other causes. Syphilis, a notorious sexually transmitted infection at the time, was often cited in attempts to smear the reputations of the women. 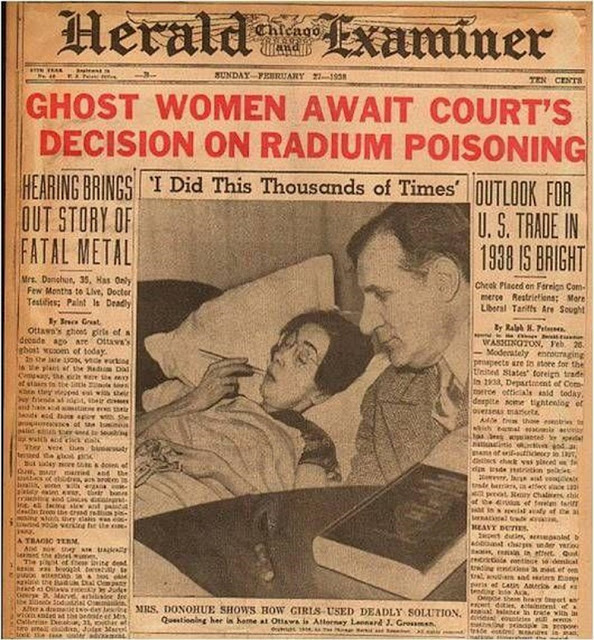 The inventor of radium dial paint, Dr Sabin A. Von Sochocky, died in November 1928, becoming the 16th known victim of poisoning by radium dial paint. He had gotten sick from radium in his hands, not the jaw, but the circumstances of his death helped the Radium Girls in court.