How the jazz-obsessed Axeman of New Orleans brought a city to its knees — and got away with it. 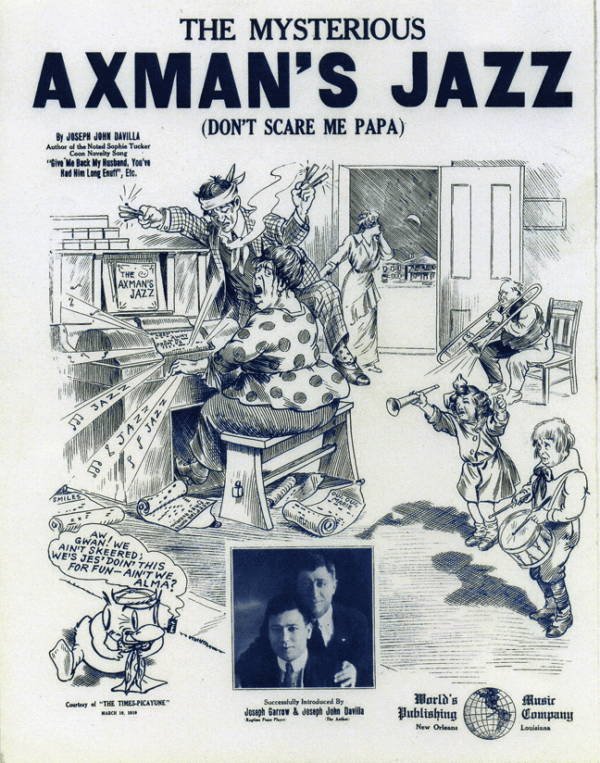 Wikimedia CommonsThe cover art for sheet music written in responses to the killings committed by the Axeman of New Orleans.

Jazz music blared into the New Orleans air from both crowded clubs and homes where families huddled inside throughout the evening of March 19, 1919.

Why? It’s what the Axeman requested.

Though he killed about a dozen people with such instruments over the course of a year and a half, he was never caught.

Various people were suspected of being the Axeman of New Orleans, though witnesses could only describe the attacker as “dark-skinned,” “heavy set,” and wearing a “downturned” hat. This scant description forced authorities to cast a wide dragnet for suspects.

Countless people faced questioning, and even some of the victims themselves were suspected of being the Axeman of New Orleans, as was the case with one man named Louis Besumer (who was separately suspected of being a German spy).

However, each case that the police made against their suspects fell apart due to lack of evidence.

Whoever he was, why did the Axeman of New Orleans turn to murder?

While we may never know, we do know what calmed his murderous urges. A letter, purporting to be from the Axeman, published in various newspapers, read that “every person shall be spared” where “a jazz band” is playing, causing residents to crowd jazz halls and play jazz records late into the night of March 19, 1919. No murders were recorded that evening.

Just as jazz calmed the Axeman down, racial biases may have riled him up. One theory holds that the attacks were racially motivated, given that most of the victims were Italian-American immigrants, who had been facing a general wave of bigotry in the U.S. during that era. Additionally, because of the Italian angle, investigators also questioned whether or not the attacks were Mafia-related. However, these notions could never be proven true.

But, more recently, some contemporary researchers believe that they have identified the Axeman of New Orleans.

Crime writer Colin Wilson points to a man named Joseph Momfre, who was later killed in Los Angeles by victim Mike Pepitone’s widow. However, fellow crime writer Michael Newton searched New Orleans (and Los Angeles) records and found no trace of Momfre, nor Pepitone’s widow. But scholar Richard Warner stated in 2009 that the chief suspect at the time was a man named Frank Mumphrey, who used the alias Joseph Monfre/Manfre.

Although this lead is an intriguing one, the Axeman’s identity remains a mystery.

Nevertheless, the killer’s violent, jazz-loving legacy continues to haunt popular culture to this day. American Horror Story: Coven and The Originals have each featured the Axeman as a character. And Chuck Palahniuk’s 2005 novel Haunted resurrects the Axeman in the “Sister Vigilante” story.

While certainly obscure, the strange unsolved case of the Axeman of New Orleans is undoubtedly not forgotten.

After this look at the Axeman of New Orleans, read up on five more terrifying serial killers you’ve never heard of before. Then, have a look at 21 serial killer quotes that will chill you to the bone.