Popular at the turn of the 19th to 20th century, quadricycles were four-wheeled bicycle-like vehicles powered by humans or motors. Henry Ford completed his ethanol-powered quadricycle in June of 1896. In June of 1899, Frederick Simms demonstrated his Motor Scout. It was similar to Ford’s quadricycle and others of the time with one huge difference. Frederick Richard Simms mounted a mark IV Maxim machine gun between its front wheels where a passenger normally sat. 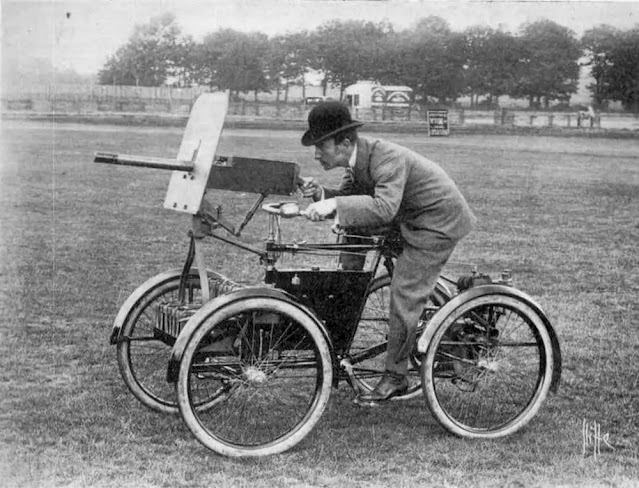 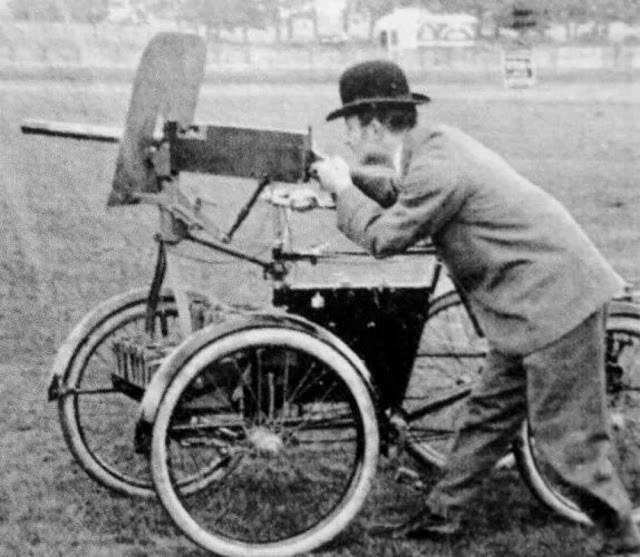 Simms’ Motor Scout was ready for tough duty, as long as it traveled along a high-quality road. It wasn’t worth its own weight in salt when traveling off road. While it featured an iron plate to protect the driver from a direct frontal shot, the driver’s sides and back were left unprotected.
A 1.5 horsepower Automatic Petrol Motor with the Simms-Bosch magneto-electric ignition powered the Motor Scout. It ran on “petrol” and could travel 120 miles on one tank. For street use, you could remove the machine gun and reclaim the second seat for a passenger.
Frederick Richard Simms (August 12, 1863 – April 22, 1944) was a pioneer in the motor industry. Educated in Germany and London as a mechanical engineer, he was a prolific inventor and businessman. Simms played an important part in the widespread adoption of gasoline-fueled engines. He is credited with coining motorcar and petrol. He pushed to increase the speed limit from 4 to a whopping 14 mph in Britain. Simms is remembered for many “firsts.” Among them, he designed the first armored cars.
(via Racing Nellie Bly)