“alternatively
unfurnished accommodation
for my wife
unborn child
and myself” 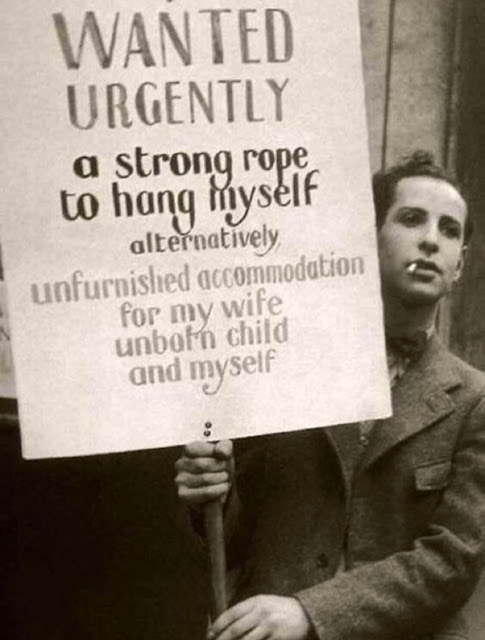 In the years 1932-33, the worst period of the Great Depression, there were approximately 11 million people unemployed in the United States. Pictured here is a young man, showing his desperate need to gain employment.

The Great Depression was the worst economic downturn in the history of the industrialized world, lasting from 1929 to 1939. It began after the stock market crash of October 1929, which sent Wall Street into a panic and wiped out millions of investors. Over the next several years, consumer spending and investment dropped, causing steep declines in industrial output and employment as failing companies laid off workers. By 1933, when the Great Depression reached its lowest point, some 15 million Americans were unemployed and nearly half the country’s banks had failed.

As the effects of the Depression cascaded across the US economy, millions of people lost their jobs. By 1930 there were 4.3 million unemployed; by 1931, 8 million; and in 1932 the number had risen to 12 million. By early 1933, almost 13 million were out of work and the unemployment rate stood at an astonishing 25 percent. Those who managed to retain their jobs often took pay cuts of a third or more.

Out of work Americans filled long breadlines, begged for food, or sold apples on street corners. A Chicago social worker wrote that “We saw Want and Despair walking the streets, and our friends, sensible, thrifty families, reduced to poverty.”

More than a third of the nation’s banks failed in the three years following 1929. Long lines of desperate and despairing people outside banks hoping to retrieve their savings were common. Many ordinary citizens lost their life savings when banks failed.

Farmers were hit particularly hard by the crisis. On top of falling prices for crops, a devastating drought in Oklahoma, Texas, and Kansas brought on a series of dust storms known as the Dust Bowl. In the South, sharecroppers—both white and black—endured crushing poverty and almost unimaginable degradation. African Americans suffered significantly higher levels of unemployment than whites due to pervasive racism.

The financial crisis was not limited to the United States. Countries in Europe and around the world experienced the depression. Hitler’s rise to power in Germany was fueled in part by the economic slowdown, and throughout the 1930s international tensions increased as the global economy declined.