These screaming baby dolls made from bisque porcelain by German doll maker Kestner from the 1920s.

Johannes Daniel Kestner, Jr., began producing high-quality dolls with papier-mâché heads and peg-jointed wooden bodies in 1805 in Waltershausen, Thuringia. By 1845, his J.D. Kestner doll manufacturing company had become a success. Following these wood-and-paper dolls, the company produced dolls with composition heads and cloth bodies.
Kestner, was an early proponent of porcelain heads, so he added porcelain and bisque doll heads to his line in the 1850s. Around this time, the German dollmaking industry was exploding, with doll factories of every sort—some made only heads, some made only bodies, and some assembled doll parts made by others.
Five years after Kestner died in 1858, his grandson Adolf Kestner took over. In 1860, he purchased a porcelain factory in Ohrdorf to make doll heads, which Kestner then attached to composition or stuffed-cloth or leather bodies. These heads were also sold to other doll makers around the country.
Like every doll maker, Kestner produced a version of the universally popular “Dolly Face” head, which has the rounded, slightly double-chinned face of a toddler or baby. These dolls could be identified as a girl or a boy and featured an open mouth showing teeth, as well as inset, or sleeping, eyes. But the company also put out a wide variety of doll heads—some with long faces like Jumeau dolls, others with chubby square faces like Bru dolls, and yet others with character faces.
One of Kestner’s innovations was an expensive leather body with riveted joints that allowed the limbs to move naturally. Kestner was one of the few German dollmakers that produced complete dolls all the way to the wigs and the fashion. These Kestner dolls were exported as far away as the United States.
In 1902, Kestner had a runaway hit in Boston high society with its “Lady Betty Modish,” a bisque dolly face doll with a jointed composition body. She came with an attached satin ball gown of the highest fashion, complete with satin rosebuds and curled ribbons, delicate jewelry, and a blond human-hair wig.
In the nine years she was produced, the most posh doll accessories imaginable were made for her, including a tiny deck of 52 playing cards, a miniature nail set made with ivory, a silk damask knitting bag with a knitting-in-progress project inside, and a velvet wintercoat trimmed with satin and rabbit fur.
The Kewpie doll, based on Rose O’Neill’s illustrations for “Ladies’ Home Journal,” was modeled by New York dollmaker Joseph Kallus and sold by his employer American doll manufacturer George Borgfeldt, who patented the design in 1913. However, the earliest all-bisque Kewpie dolls were produced by Kestner for Borgfeldt, their trademark paper heart stamped with “Germany” under the Kewpie logo.
Kestner company first registered for a patent for its bisque heads in 1897, and the incised model numbers like “162” are often accompanied by “Made in Germany,” whereas bodies tend to have a red “Germany” stamp. The company finally closed its doors in 1938, 20 years after Adolf’s death. 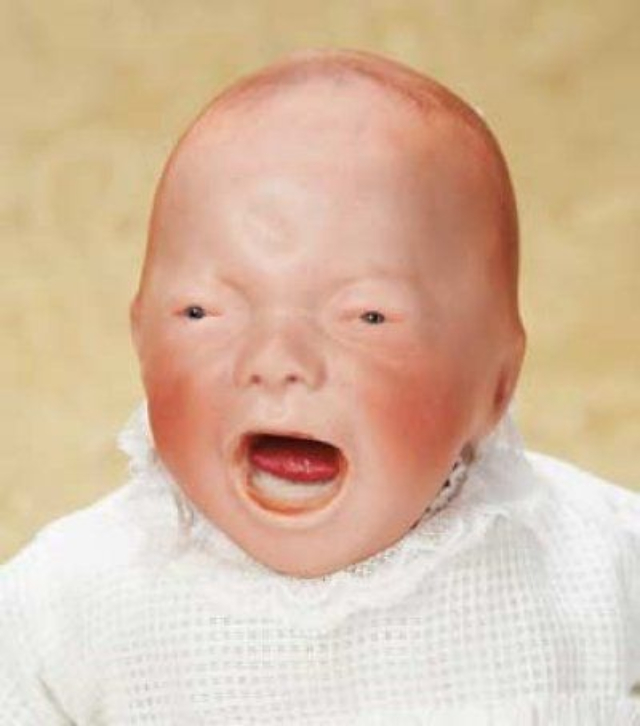 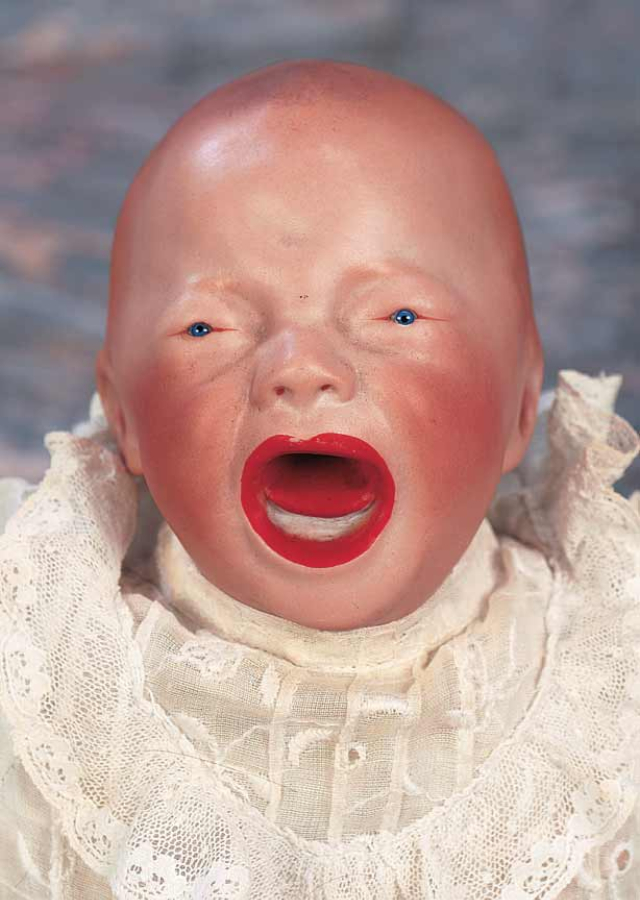 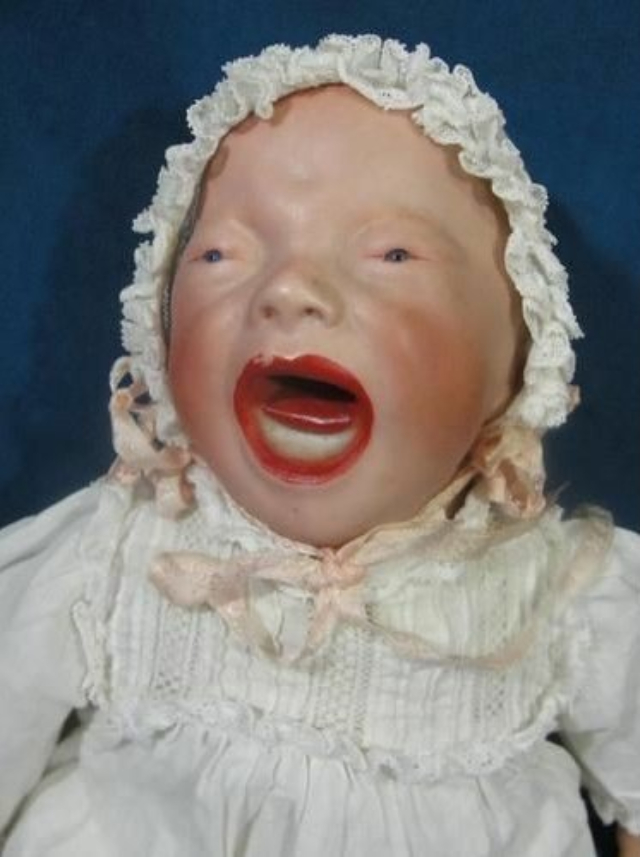 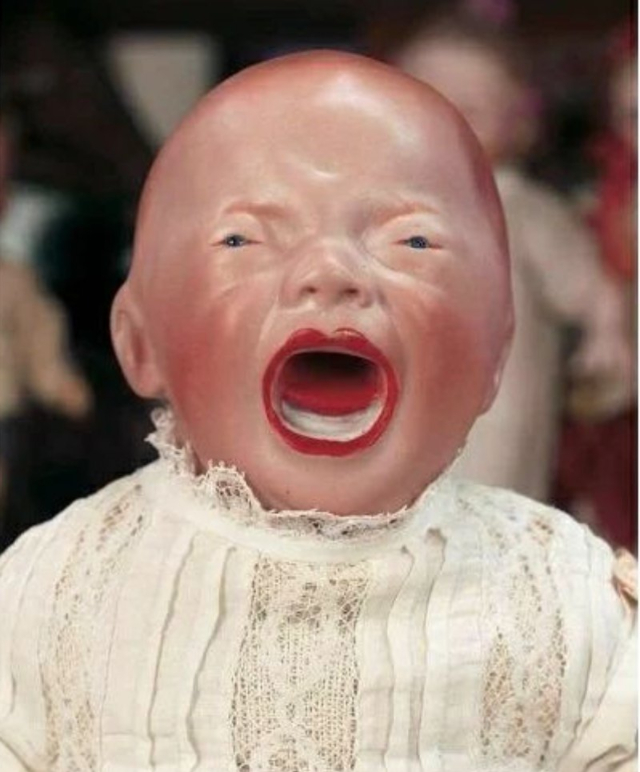 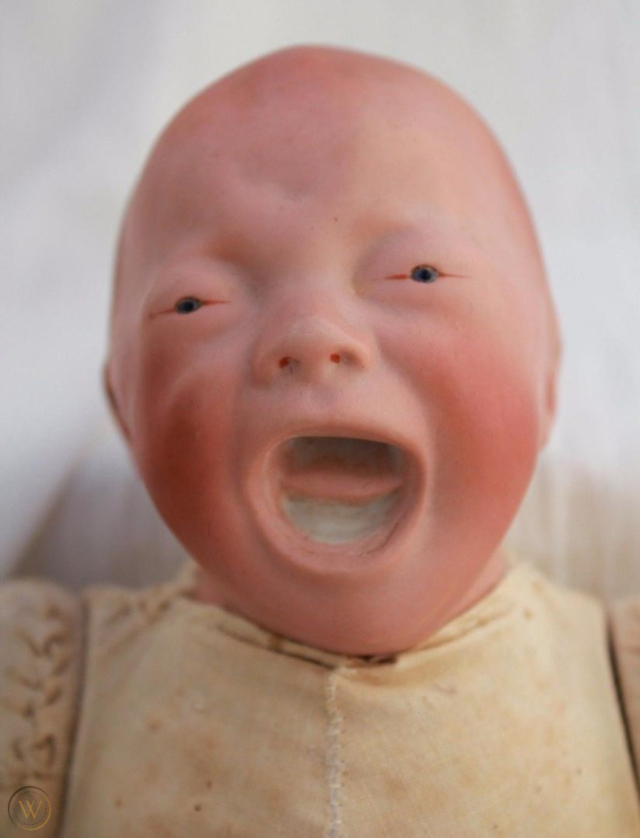