Painter Paul Gauguin playing a harmonium at the Paris studio of Alphonse Mucha, a Czech Art Nouveau painter, ca. 1895. How this came about — how Gauguin decided to strip off his pants and shoes and start playing that pump organ — we’ll probably never know. 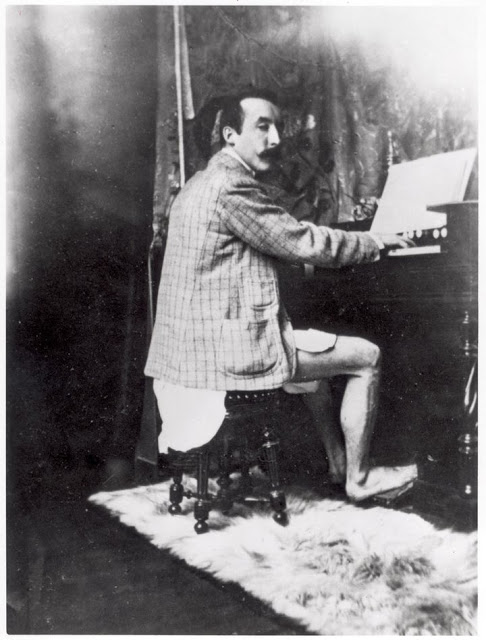 Paul Gauguin (June 7, 1848 – May 8, 1903) styled himself and his art as “savage”. Although he began his artistic career with the Impressionists in Paris, during the late 1880s he fled farther and farther from urban civilization in search of an edenic paradise where he could create pure, “primitive” art. Yet his self-imposed exile to the South Seas was not so much an escape from Paris as a bid to become the new leader of the Parisian avant-garde. Gauguin cultivated and inhabited a dual image of himself as, on the one hand, a wolfish wild man and on the other, a sensitive martyr for art. His notoriety helped to promote his astonishing work, which freed color from mimetic representation and distorted form for expressive purposes. Gauguin pioneered the Symbolist art movement in France and set the stage for Fauvism and Expressionism.
His work was influential on the French avant-garde and many modern artists, such as Pablo Picasso and Henri Matisse, and he is well known for his relationship with Vincent and Theo van Gogh. Gauguin’s art became popular after his death, partially from the efforts of dealer Ambroise Vollard, who organized exhibitions of his work late in his career and assisted in organizing two important posthumous exhibitions in Paris.