Lord Alfred Douglas, nicknamed Bosie, was a young aristocrat and poet, the youngest son of the Marquess of Queensberry. He looked like an angel: fragile, with a very pale complexion, blonde hair and blue eyes, but often appearances can be deceptive and this case was no exception. The story of his relationship with Wilde began in 1892. Bosies’ cousin, Lionel Johnson, had lent him a copy of The Picture of Dorian Gray, and after reading it “fourteen times in a row” he wished to be introduced to the author and so at the end of June 1891 Lionel Johnson accompanied his cousin in Tite Street and introduced him to Oscar Wilde. 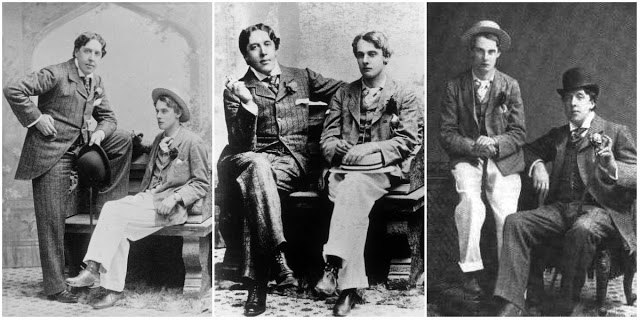 At the end of June 1892 Douglas needed Oscar’s help, because he was being blackmailed. Oscar, thanks to his lawyer George Lewis, solved all and since then they started to date and by the end of December 1893 they had become inseparable. The rumors about their lives ran all over London. The writer had little desire to hide that relationship and Bosie was even more eager to show it, as he wanted everyone to know that he was Oscar Wilde’s “favorite”. In a letter to his friend Robert Ross Oscar writes: “My dearest Bobbie, Bosie has insisted on stopping here for sandwiches. He is quite like a narcissus – so white and gold (…) Bosie is so tired: he lies like a hyacinth on the sofa, and I worship him”. Oscar was even introduced to Bosie’s mother, Lady Bracknell, and he made her one of the characters of his most popular comedy: The Importance of Being Earnest.

However, Bosie was not that “angel” he apparently seemed to be, but rather, he was usually described by his closest friends as spoiled, reckless, insolent and extravagant. He used to spend money on boys and gambling and expected Wilde to contribute to his expenses. It was Bosie who introduced Oscar to the circles of young male prostitutes, rent boys who were readily available in spite of (or perhaps because of) the moral climate of the straight-laced Victorian Period. Wilde did nothing but follow him dispensing money, gold or silver cigarette cases and other gifts. He once said that attending these young guys was like “feasting with panthers.” Alfred Taylor (son of a manufacturer), Sidney Mavor (future priest), Maurice Schwabe and Freddy Atkins, Edward Shelley for a short time and Alfred Wood, a boy of seventeen, who blackmailed him obtaining 30 pounds, were some of those “panthers” who crowded Wilde’s chamber. 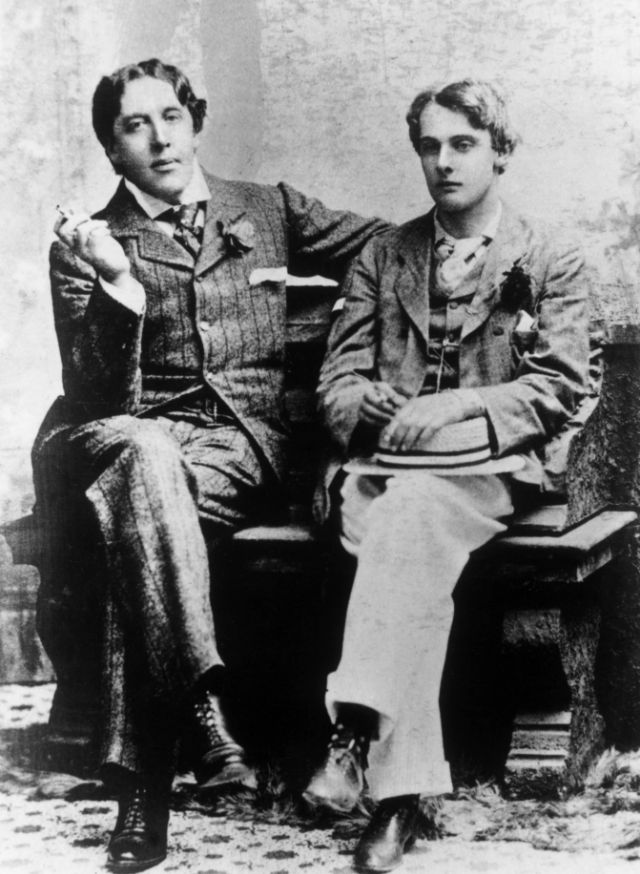 Since 1893 Wilde preferred to stay in a hotel to avoid scandals in order to meet freely and secretly his young lovers, but Douglas, instead, was not interested in hiding at all: he always entered from the main entrance. His friends were concerned and disappointed mainly because Bosie’s imprudent behavior exposed Oscar to very serious risks: it openly violated the “Criminal Law amendment Act” of 1885 , an amendment which made “gross indecency” a crime in the United Kingdom. His friend Pierre Louys visited Wilde in the hotel with his wife Constance, who tearfully pleaded her husband to come home, but it was a failure.

Wilde’s first serious risk was the case of Philip Danney, a sixteen year old son of a colonel who on Saturday went to bed with Douglas, with Wilde on Sunday and on Monday with a girl at Douglas’s expense. When the young man then returned to school, he was not able to produced a justification for the school days he had missed, the whole thing was discovered. His father went immediately to the police, but on the advice of his lawyer, as the guy seemed unwilling to make the name of Wilde, he realized that it was better not to act, even because his son risked to be imprisoned. After a furious fight with Oscar, Alfred Douglas left for Cairo, while Wilde hid in Paris and somehow he regained a certain serenity and he also went to applaud the poet Paul Verlaine, who had recently been released from prison after his troubled vicissitudes with Rimbaud. At that time he also found his creativity back, as he wrote among other things The Canterville Ghost, but the sudden return of Douglas ended his desire to write. Once again everything was as it used to be. 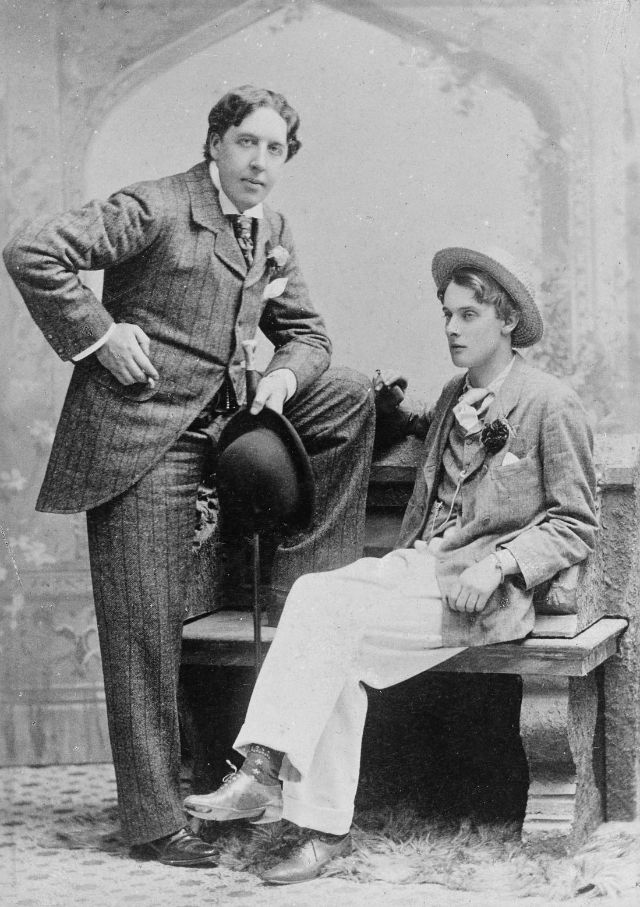 Alfred’s father, the Marquess of Queensberry, had tried in vain to convince his son to end the relationship, furthermore he was disappointed as Bosie had left Oxford without achieving a degree and he could not see any prospect of his taking up a proper career. He threatened to “disown [Alfred] and stop all money supplies” and to “make a public scandal ” if he continued his relationship with Wilde. Alfred’s answer was “I detest you” on a postcard. It was clear that he would take Wilde’s side in a fight between him and his father. Queensberry also planned to throw rotten vegetables at Wilde during the premiere of The Importance of Being Earnest, but, forewarned of this, the playwright was able to deny him access to the theatre. Queensberry, now exacerbated, publicly insulted Wilde by leaving, at the latter’s club, a visiting card on which he had written: “For Oscar Wilde posing as a somdomite”–a misspelling of “sodomite.”

Against the advice of his closest friends, Wilde was convinced by Bosie to sue the Marquess for libel in a private prosecution. It was the wrong choice. Queensberry was arrested, but he not only avoided conviction demonstrating in court that the charge was not true, but Wilde found himself involved in a new trial with the accusation of “gross indecency”. Witnesses, private letters, it had not been difficult to find evidence. Three days after the beginning of the trial, on April 29, Wilde wrote from prison a moving letter to Bosie, who had gone to Paris in the meanwhile. On 25 May 1895 Wilde was sentenced to two years and three months of hard labour, first at Pentonville, then Wandsworth, then in the famous Reading Gaol 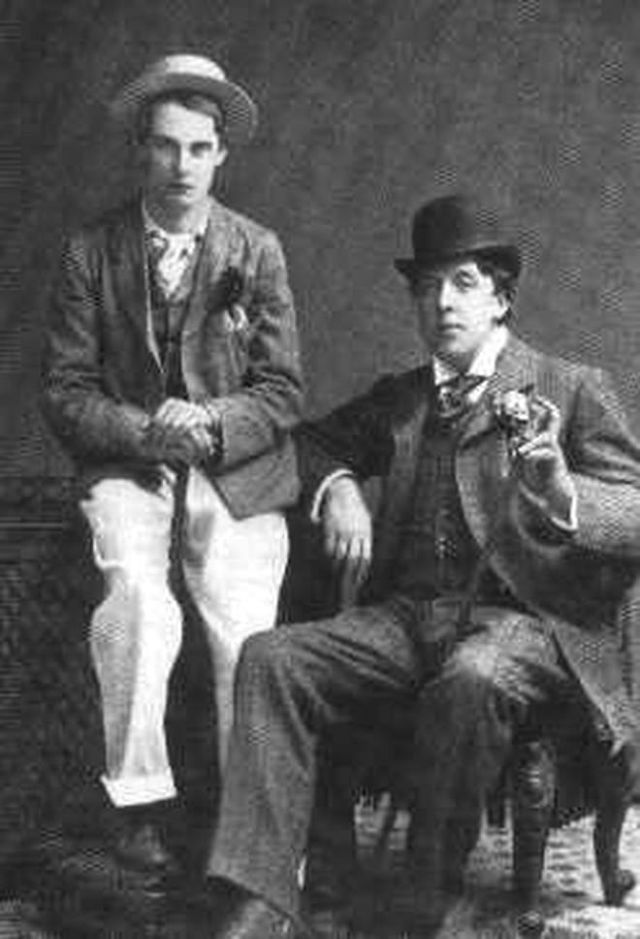 The prison regime was tough: the poet had serious health problems and by the way, falling awkwardly because of a collapse, he got himself a wound in his right ear that probably would cost him his life five years later, because the infection degenerated and turned into meningitis. Meanwhile, Wilde had vainly hoped for solidarity and support from his beloved Bosie, who instead had turned away from him proving coldness and callousness; the boy even told him, during his illness, that “when (he) was not on (his) pedestal (he) was not interesting.” Hurt and disgusted by the attitude of his lover, Wilde wrote from jail a very long letter entitled De Profundis, in which he expressed his sorrow and his contempt for the vanity and the inconsistency of Lord Alfred, repudiating him formally. Wilde was not authorized to send it, so when he was released, he gave the manuscript to his friend Robert Ross, with the instructions to send a copy to Bosie, who however denied for life to have received it. The letter was published only in 1905, five years after the poet’s death.

The prison experience had affected him deeply, since then he cultivated the dream of escaping from the world that had sentenced him and refused his way of being. He moved to France and lived in Paris for four months trying to rebuild his life and trying to forget the man who had brought him to ruin. But love is stronger than reason. He got back in touch with Douglas and they decided to spend the winter together in Naples. The two lovers lived on Posillipo hill, at Villa Giudice. Although Wilde was traveling as Sebastian Melmoth, his arrival in the city became public soon, the news was even reported by the newspaper Il Mattino in an article by Matilde Serao. 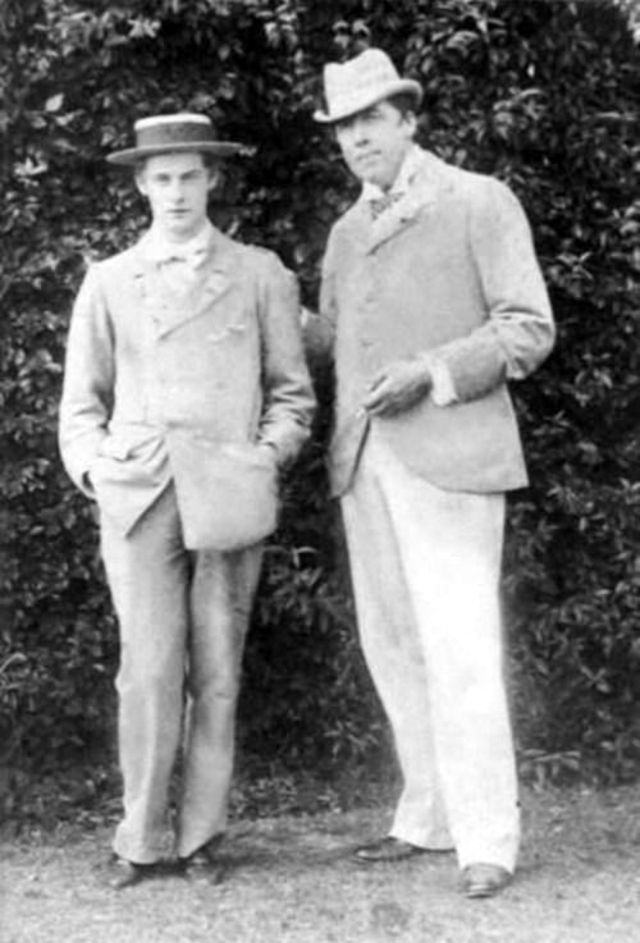 When they were in Capri, at the Quisisana, as soon as they sat down to dine, the owner invited them to go somewhere else as some fellow countrymen, who had recognized the poet, did not tolerate to be in his proximity. The incident did not remain confined in the island and the two were again on everyone’s lips and the scandal forced the relatives of both to find a remedy. The British Embassy was involved and the two were deprived of their income. Wilde was thus dispossessed of his small income granted by his ex-wife, while Bosie’s funds were cut by his mother. Bosie’s mother paid the bills of the couple, and forced him to go back home, while Wilde went to Taormina with the little money received from the mother of his lover. In February 1898 he left for Paris.

The relationship with Lord Douglas was now finished. Bosie had finally abandoned Wilde, probably for fear of being disowned by the family. In 1902, Douglas married Olive Eleanor Custance, heiress and poet. They had a son, Raymond, who suffered from a severe form of schizophrenia and died in a nursing home in 1964. The marriage ended soon in a legal separation, but there was no divorce. In the last years of his life, Douglas lived mainly thanks to his maternal inheritance. His father, in fact, had squandered much of his fortune. After the outbreak of the Second World War, he left London and took refuge with a couple of friends in Lancing, West Sussex, where he died of heart failure in 1945. 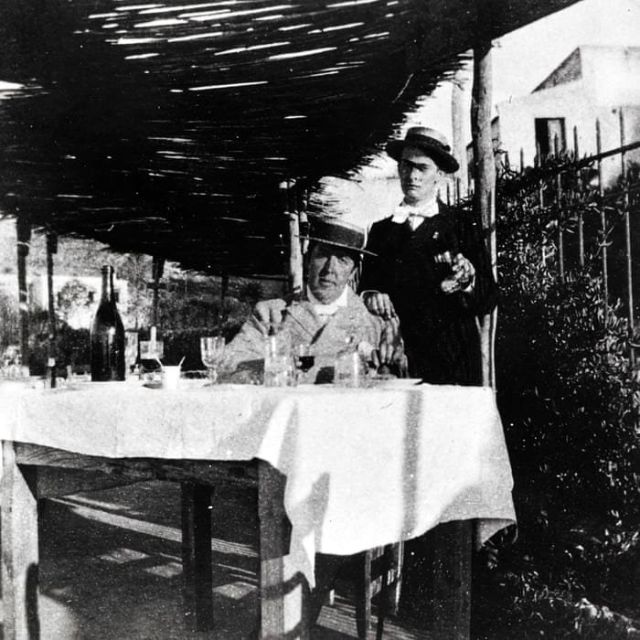 (This original article was published on e-Tinkerbell)