It comes as no news to those familiar with his work that Švankmajer has something of an obsession with food. From his very earliest works traces of both food itself and the mechanisms needed to use it (mastication, digestion etc.) have played frequent and large roles in many of his films. 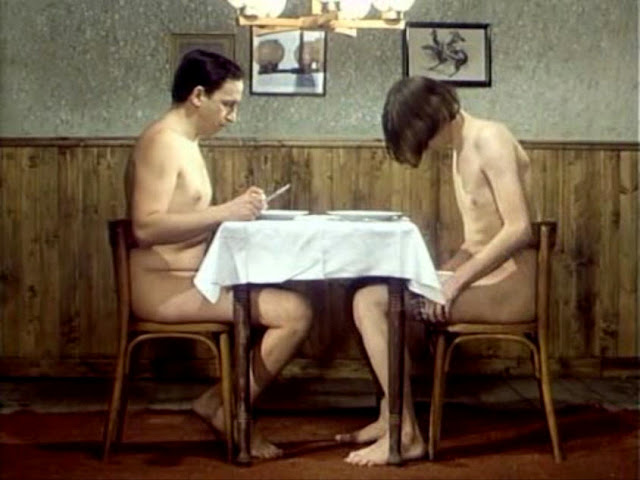 So in 1992, with a short simply titled Food (Jidlo), it seems the great animator has finally decided to devote an entire short simply to the topic. The result is rather dizzying and incredibly dense with detail; too much to go into here. Divided into three chapters the film depicts the three major meals of the day. It examines the human relationship with food by showing breakfast, lunch, and dinner.

A man enters a room, sits down, and brushes the previous diner’s leftovers onto the floor. Across from him sits another man with a placard attached to a chain hanging around his neck. The diner stands up and reads the placard one line at a time and follows the instructions. He puts money down the man’s throat and pokes him in the eye. The man’s shirt unbuttons itself, and a dumbwaiter rises up into where the man’s chest should be. The diner takes his food, and punches the man in the chin with his third knuckle for his utensils. When he is done eating, he kicks the man’s shin for a napkin. After wiping off his mouth, the diner convulses, and then goes limp. The man now comes to life, stretches, and places the placard on the former diner. He stands and puts another tally mark on the wall. Another diner comes in and the scenario is repeated with him. At the end, we see a line stretching down the hall and around the corner.

Two diners, a business man and a vagabond, are unable to get the waiter’s attention. They proceed to eat everything in sight: the flowers, their shoes, pants, shirt, underwear, plates, table cloth, table, and chairs. The vagabond watches the business man and then eats what he eats. All the while they are eating whatever is on or around them, they try to get the waiter’s attention whenever he passes by, but to no avail. In the end with everything else eaten, the business man eats his utensils. The vagabond also eats his. The business man then smiles, pulls his utensils from his mouth, and advances on the vagabond (who recoils in horror).

An interior of a luxurious restaurant is shown. A wealthy gourmet sits at a table adding many sauces and spices to his dish, which is hidden by the sheer number of condiments (this is the scene shown in the film poster). This continues for a long time, and then we see him hammer a fork to a wooden left hand. He then starts to eat his own hand. In a series of short and violent scenes, we are then shown an athlete eating his lower leg, a woman eating her breasts (this is also shown in the film poster), and the last eater, who is about to eat his genitals. As he realizes the presence of the camera, the man covers his genitals and shoos the camera away with his hand.

A New York Times review called the film “caustically witty but slight.” It goes on to say that “Švankmajer conceived the film in the 1970s, when it seemed too risky a political allegory to be made […] it now seems too simple a statement about how people are devoured by mechanistic states and each other.”