The 1920s was the first generation when the younger crowd became more in line with the times than the older generation, the flapper subculture was on the rise and an era of women’s liberation was seen in every corner and street of the country. 30’s slang was greatly influenced by the youth and liberated women with slang words and terms that are still used today. 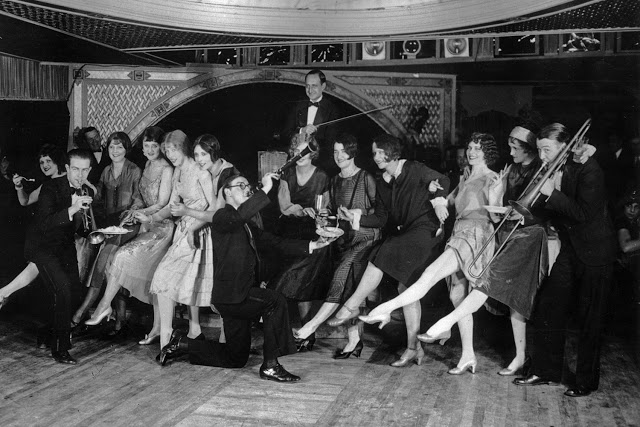 1. Cat’s Meow/Pajamas – This 1920s slang term was used to say that something or someone was cool, hip, stylish, wonderful, etc. I.e. “Mary sure is the cat’s meow, isn’t she?”

2. Applesauce – The slang word was used as a swear word or explanative. I.e. “Applesauce, I really stubbed my toe good!”

3. Spiffy – This ’20s slang word was used to describe someone as elegantly put together or dressed in expensive clothes. I.e. “That new dress of yours is sure spiffy, Missy.”

5. Speakeasy – This was used during the time of prohibition as a slang term for an illegal bar or club with alcohol, gambling, etc. I.e. “Joey got us into that speakeasy in the basement of the shoe store last night.”

6. Pill – Used a way to say that someone was not fun, a killjoy or that they were a teacher (and therefore someone who was not fun.) I.e. “She’s such a pill, she won’t let me pass notes in home ec.”

7. Left Holding the Bag – This 1920s slang term was used when someone was blamed unfairly or cheated out of something by another person. I.e. “He split and left me holding the bag when the cops came.”

8. On the Up and Up – The ’20s slang term was a way to say that someone or something was legal, proper, good, etc. I.e. “Danny is really on the up and up, he won’t even go to his favorite speakeasy anymore.”

9. Get a Wiggle On – This slang term for the ’20s was used to tell someone to hurry up, get moving, split, etc. I.e. “The cops are coming, Johnny, get a wiggle on before they catch up and we get pinched!”

10. Pinch/Pinched – Used to say that someone was arrested by the police. I.e. “Harry got pinched for robbing a bank last night.”