TIME magazine had been naming a “Man of the Year” since 1927, but broke with tradition in 1982 to name the computer the “Machine of the Year.” Ironically, the writer of the story wrote it on a typewriter, since TIME’s newsroom would not get computers for another year. 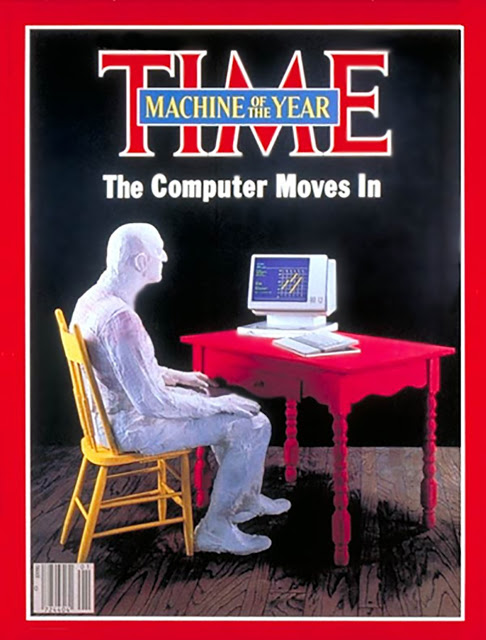 TIME magazine alters its annual tradition of naming a “Man of the Year,” choosing instead to name the personal computer its “Machine of the Year.” In introducing the theme, TIME publisher John A. Meyers wrote, “Several human candidates might have represented 1982, but none symbolized the past year more richly, or will be viewed by history as more significant, than a machine: the computer.”

His magazine, he explained, has chronicled the change in public opinion with regard to computers. A senior writer contributed: “computers were once regarded as distant, ominous abstractions, like Big Brother. In 1982, they truly became personalized, brought down to scale, so that people could hold, prod and play with them.”

At TIME, the main writer on the project completed his work on a typewriter, but Meyers noted that the magazine’s newsroom would upgrade to word processors within a year.

In 1980, according to TIME, 724,000 personal computers were sold in the United States. The following year, with more companies joining the frenzy, that number doubled to 1.4 million. In 1982, the number doubled again.

In winning the nod from TIME, the PC beat out some formidable competition, including Ronald Reagan (who would be named twice), Britain’s Margaret Thatcher and Israel’s Menachem Begin. But as the magazine opined: “There are some occasions, though, when the most significant force in a year’s news is not a single individual but a process, and a widespread recognition by a whole society that this process is changing the course of all other processes.”