Bob Seidemann took photographs that graced the covers of some of the 1960s and ’70s most iconic record albums. But when he was hanging with Janis Joplin and the rest of Big Brother and the Holding Company in San Francisco, he was just a friend of theirs, so the pictures he took were mostly candid shots. His fame as a photographer would come later. Now, we get to take a peek at the pictures he took during their rehearsals in 1967, some for the very first time.

“I heard that a band called Big Brother and the Holding Company was playing at a place on Fillmore, so I went.” – Bob Seidemann

The black-and-white, Kodak Tri X Pan photographs Seidemann took of the band rehearsing in the warehouse appear to be from two different days, identifiable because of the change in clothes worn by band members. Joplin’s garb is easiest to describe. In one group of photographs, she’s wearing a T-shirt with the JOB cigarette-papers woman on it. This was probably not a random choice on her part—the image had been popularized by artists Alton Kelley and Stanley Mouse on a poster for a Big Brother show dated October, 7, 1966, at the Avalon Ballroom.

The rest of Joplin’s attire—pin-striped jeans tied at the waist by a braided belt, a pair of kitten-heeled sandals beneath her feet—is defiantly casual, which is surprising since these photographs were definitely taken after Big Brother’s triumphant performances at the Monterey Pop Festival in June of 1967, which means Joplin was on her way to being a full-fledged rock star, and all the wretched excess that implies.

Foremost among these hardworking musicians were the members of Big Brother and the Holding Company, which performed 135 concerts during 1967, occasionally grinding out two or three gigs in a single day. 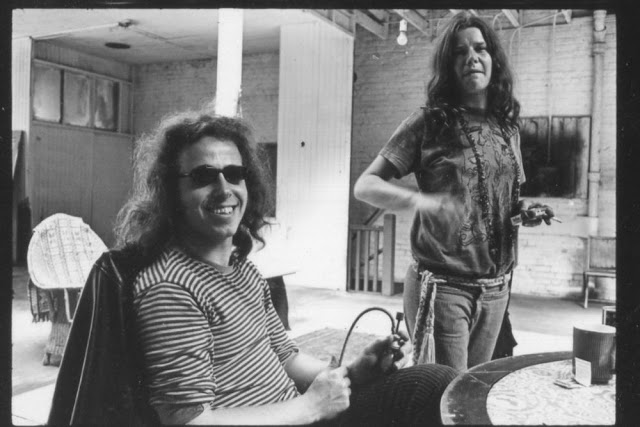