Llanfairpwllgwyngyllgogerychwyrndrobwllllantysiliogogogoch is a large village and local government community on the island of Anglesey in Wales. It is the longest place name in Britain with 58 letters. Translated into English it means “St Mary’s church in the hollow of the white hazel near to the fierce whirlpool of St Tysilio of the red cave” and was named so in the 1960s purely so that the village would have the longest name in Britain. 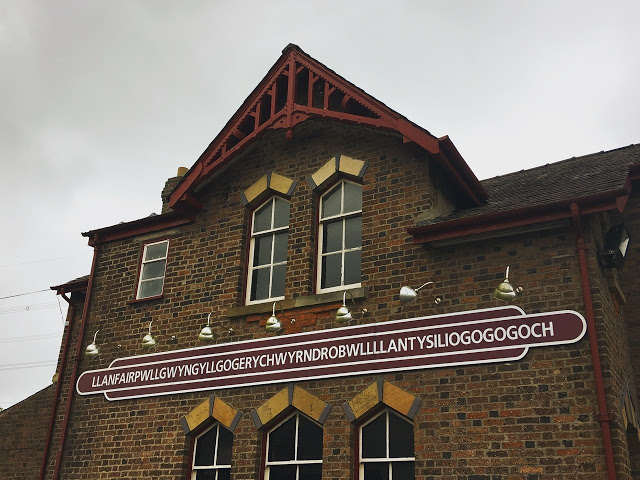 Llanfairpwllgwyngyll is a village with a long place name in Wales and is situated on Ynys Mon (the island of Anglesey) in north Wales. It currently has a population of over 3,000 and is predominately a Welsh speaking part of Wales. It is situated near to the bridge, Pont Britannia (Britannnia Bridge) which connects mainland Wales to the island of Anglesey over the Menai Strait. Possibly the more famous bridge connecting Wales to Anglesey is the Thomas Telfod suspension bridge.

It is often shorted in speech and in writing to Llanfairpwllgwyngyll or Llanfair PG. However, in the town itself, the name is often shown in full at, for example the train station and other commercial buildings.

For centuries, Llanfairpwll was a small rural settlement on Ynys Mon. In the 16th century there were about 50 inhabitants. By the early 19th century, it had grown to about 400 inhabitants in what was becoming to be known as the old town Pentre Uchaf, or Upper Village and the village name became either Llanfairpwll gwyngyllgogerych wyrndrobwll llantysiliogogogoch-isaf (lower town) or
Llanfairpwll gwyngyllgogerych wyrndrobwll llantysiliogogogoch-uchaf (upper town).

The coming of the 20th century brought major changes following the construction of Thomas Telford’s new road in the 1820s and then the arrival of the railway crossing at Britannia Bridge at the beginning of the 1850s. This led to the development of a new part of the village, which became to be be known as Pentre Isaf or Lower Village around the railway station.

It is believed that originally, the village was called Llanfair Pwllgwyngyll. In the second half of the 19th century, at the beginning of the 1850s when a railway was being built between Chester and Holyhead, the village was renamed.

A group of enterprising local people encouraged the railway builders to build a station at Llanfairpwll to encourage travelers to shop at the village to develop commercial trade. It is believed that the name Llanfairpwll was invented around this time by a cobbler from Menai Bridge who had the idea of combining the name of Llanfairpwllgwyngyll with that of neighboring Llandysiliogogoch to create the longest name in the world. It is very unlikely that he had any idea as to to how successful this name change would be as a tourist marketing plan it would be!