They say one man’s trash is another man’s treasure. One 31-year-old St. Louis man learned that in the sweetest way.

In February 2019, a guy in Phoenix named Matt Shoukry sold a used VCR on eBay for 40 bucks. And the 86-year-old guy who bought it sent a hand-written thank-you note.

His first name is Don, and he’d never bought anything on eBay before. So he probably didn’t know you can leave feedback online.

In the letter, he explained that he’d recently found a bunch of old tapes, but didn’t have any way to watch them. So he thanked Matt for the prompt delivery… said the VCR was like new… and talked about all the videos he watched.

He said there was footage from his retirement party 25 years ago, which he’d never seen before. Adding, “Jeez, we were young.” And he was also able to watch his wedding video, and see a bunch of friends and family who are no longer with us. Some of his other tapes showed vacations and skiing trips with his kids. So he got to see them growing up. 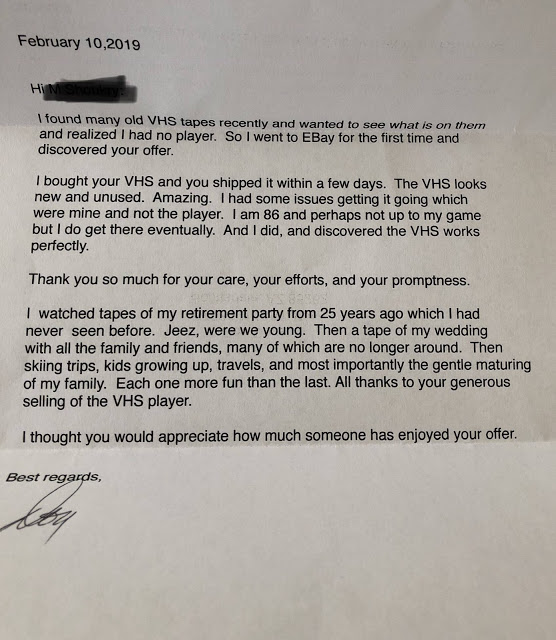 Matt was so blown away by the letter, he’s framing it. He’s also writing Don back to say thank you. And he’s offering to digitize all his tapes for him, so they’re easier to watch.

I’m going to frame (the letter) and put it next to my desk in the house because it means a lot to me,” he told FOX 2. “I’m going to offer to digitize his videos so he doesn’t have to worry about his tapes degrading.

Here’s the transcript of the letter:

I found many old VHS tapes recently and wanted to see what is on them and realized I had no player. So I went to EBay for the first time and discovered your offer.

I bought your VHS and you shipped it within a few days. The VHS looks new and unused. Amazing. I had some issues getting it going which were mine and not the player. I am 86 and perhaps not up to my game, but I do get there eventually. And I did, and discovered the VHS works perfectly.

Thank you so much for your care, your efforts, and your promptness.

I watched tapes of my retirement party from 25 years ago which I had never seen before. Jeez, were we young. Then a tape of my wedding with all the family and friends, many of which are no longer around. Then skiing trips, kids growing up, travels, and most importantly the gentle maturing of my family. Each one more fun than the last. All thanks to your generous selling of the VHS player.

I thought you would appreciate how much someone has enjoyed your offer.