These powerful photos of combat medics from the Civil War to Vietnam show some of history’s greatest unsung heroes in action.

Anesthesia is dripped onto a cone that is held over the nose and mouth of a soldier during the American Civil War before a doctor amputates the man’s leg. Circa 1861-1865.National Museum of Health and Medicine

Battered soldiers rest outside of a brick hospital building in Fredericksburg, Va. The soldiers had suffered injuries fighting in the Civil War’s Battles of the Wilderness campaign. 1864.Buyenlarge/Getty Images

A medic talks with a wounded solider lying on a gurney during World War I. Circa 1915. Guelph Museums/Wikimedia Commons

A sailor suffering from a bloody head wound receives treatment from a doctor in Germany. Date unspecified.Vintage Images/Getty Images

An injured soldier is taken away on a field ambulance by a member of the Royal Army Medical Corps. Field Ambulance Cadets at this time often took on the duties of stretcher bearers, orderlies, and other jobs that did not require a qualified doctor. Date unspecified.Hulton-Deutsch Collection/CORBIS/Corbis via Getty Images

Royal Army Medical Corps medics help to treat a German solider who was hit in the face by British fire near Carnoy, France during World War I. 1916.Bettmann Collection/Getty Images

Red Cross worker Anna Rochester helps to provide an injured solider with a little relief by lighting his cigarette at a military hospital in Souilly, France during World War I. Circa 1917. National Library of Medicine/Flickr

Troops of the 511th Parachute Infantry Regiment carry a wounded soldier to an aid station at Manarawat on the island of Leyte during World War II. 1944.National Archives/Wikimedia Commons

A German combat medic gives first aid to a solider who was fighting on the front line and received a leg wound during World War II. 1940. German Federal Archives/Wikimedia Commons

A medical team at work on an injured comrade during the Battle of Normandy during World War II. 1944.Wikimedia Commons

An American Army doctor operates in an underground bunker surgery room behind the front lines in Bougainville, Papua New Guinea during World War II. The injured soldier had been wounded by a Japanese sniper. 1943. Department of the Army/Wikimedia Commons

A doctor with the Royal Army Medical Corps checks on a wounded soldier during World War II. 1944. Wikimedia Commons

A wounded American soldier of the 4th Division receives blood plasma after an injury during the Battle of Saipan in the Northern Mariana Islands during World War II. 1944.Keystone/Hulton Archive/Getty Images

A solider lies on a stretcher as several combat medics provide him with first aid in France during World War II. 1944. National Archives/Wikimedia Commons

An American medic works with two Army nurses to administer blood plasma to a patient who was critically wounded by shell fragments at the Battle of Anzio in Italy during World War II. 1944.Margaret Bourke-White/The LIFE Picture Collection/Getty Images

A U.S. medic helps to treat a solider who was injured during the Allied invasion of Sicily during World War II as several women and a child look on. 1943. Ullstein bild via Getty Images

American Captain Clarence Brott applies a cast to the leg of a soldier with a deep wound in his thigh inflicted by a shell fragment during World War II. 1943. National Library of Medicine

A civilian who was injured during the American invasion and bombardment of Inchon during the Korean War receives treatment from a U.S. medical orderly. 1950. Hulton-Deutsch Collection/CORBIS/Corbis via Getty Images

An American Air Rescue Service crew treats a wounded U.N. soldier who has suffered blood loss on one of an H-5G helicopter’s two outboard litters during the Korean War. Circa 1950-1953.National Museum of the U.S. Air Force

A stretcher carrying a wounded North Vietnamese Army soldier clears the trees on its way up to the Marine CH-46 Sea Knight helicopter during Operation Taylor Common during the Vietnam War. 1968. Jonathan Abel Collection, USMC/Wikimedia Commons

A doctor shouts out in desperation for a stretcher team as he treats a wounded soldier of the U.S. 1st Cavalry Division near Bong Son during the Vietnam War. 1966.Bettmann Collection/Getty Images 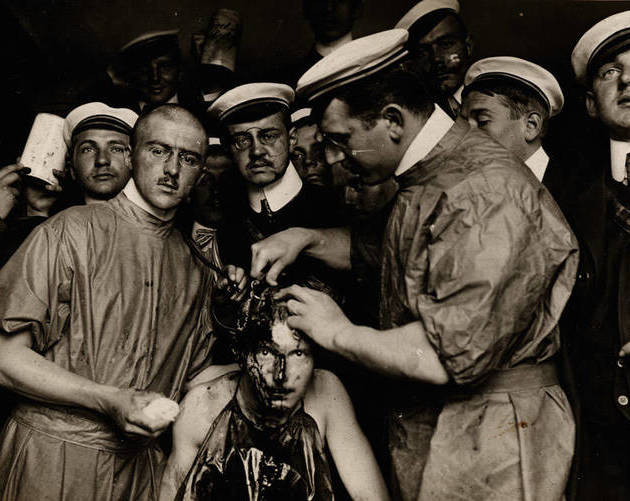 25 Dramatic Photos Of Combat Medics In Action Throughout History

The combat medic is a unique type of solider. They put themselves in the middle of life-threatening battle, but they do so in order to save, not take lives.

Not only must they work with limited resources to save lives, they must do so under intense pressure, knowing that their own lives could come to an end at any moment. To put it bluntly, it’s a job that requires nothing short of nerves of steel.

Within the U.S. military, the incorporation of the combat medic — a soldier equipped with the training to provide first aid on the battlefield — came about during the Civil War when Union Major Jonathan Letterman, Medical Director of the Army of the Potomac saw a need for integrating medical aid into combat battalions. In the 150-plus years since, combat medics have evolved immeasurably.

And while combat medics tend to the injuries of the wounded on the battlefield, behind the lines, military field doctors also work tirelessly to help the wounded. This means performing surgeries and keeping the spread of disease and infection at bay without the advantages of a full-service hospital.

In most Western armies, combat medics can be easily identified by markings featuring a red cross on a white background as a way to signal their protection as non-combatants under the Geneva Convention. However, this has been widely phased out in more recent years in the case of recognized military units facing insurgent enemies who either don’t recognize the Geneva Convention or choose to ignore it. This, of course, puts combat medics in even more danger than they’ve long faced for decades in wars around the world.

As you’ll see in the gallery above, the combat medics, military doctors, and nurses who put themselves in danger to save lives, prove that wartime heroism takes many forms.

After this look at combat medics throughout history, explore the story of Desmond Doss, the medic who inspired Hacksaw Ridge. Then, see some of the most powerful World War 2 photos ever taken.