Stunt doubles are the action heroes on screen we don’t even notice, risking their lives to get the perfect shot. Many of them continue to work with specific actors not only because they look so similar to them but because they are so incredible at their jobs! 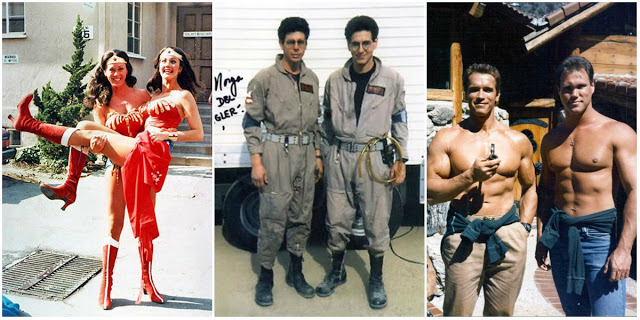 A stunt double is a cross between a body double and a stunt performer, specifically a skilled replacement used for dangerous film or video sequences, in movies and television, and for other sophisticated stunts. Stunt doubles may be used in cases where an actor’s physical condition precludes much activity, or when an actor is contractually prohibited from taking certain risks.

The terms stunt double and body double may be used interchangeably for cases where special skills (sometimes far from dangerous) are needed, such as dancing, playing the piano, or competitive skiing. Stunt doubles should be distinguished from daredevils, who perform stunts for the sake of the stunt alone, often as a career. Sequences often do not place stunt doubles in the same mortal peril as the characters: for example, harnesses and wires can be digitally edited out of the final film.

Many stunt doubles have long production careers as part of a star actor’s contractual “support crew” along with the star’s cooks, trainers, dressers, and assistants. Often stunt doubles have to look like their respective actors, in order to keep the character’s appearance. Some stunt doubles have been associated with their lead actors for decades.