A sergeant interrupts his shave in a barber shop and holds up the latest copy of the Stars And Stripes newspaper announcing the surrender of Japan with the headline of “PEACE.” Paris, France. August 14, 1945.Underwood Archives/Getty Images

A sailor kisses a woman in New York’s Times Square on August 14, 1945.US Archives/Wikimedia Commons

Residents of Oak Ridge, Tennessee fill Jackson Square to celebrate the surrender of Japan on August 14, 1945. Oak Ridge was one of the three main sites of the Manhattan Project and was responsible (though those working there did not know it) for refining uranium to be used in the first atomic bombs.Wikimedia Commons

American servicemen and women gather in front of the Rainbow Corner Red Cross Club in Paris to celebrate the unconditional surrender of the Japanese on August 15, 1945.Wikimedia Commons

A member of the Canadian Women’s Army Corps seated on a courthouse lion celebrates the end of the war. August 1945.City of Vancouver Archives/Wikimedia Commons

A double-decker bus slowly pushes its way through the huge crowds gathered in Whitehall, London to hear Winston Churchill’s victory speech and celebrate Victory in Europe Day on May 8, 1945.Imperial War Museum/Wikimedia Commons

A group at the Supreme Headquarters of the Allied Expeditionary Force reads the special V-E Day edition of the Maple Leaf newspaper. Paris, France. May 11, 1945.Flickr

Four MPs take a break along a German road in May of 1945 to read about the Nazi surrender in the Stars and Stripes newspaper.Wikimedia Commons

German troops wave from a train headed home after the signing of the armistice that ended WWI in 1918.PhotoQuest/Getty Images

Tanks parade through London at the end of WWI. 1918.National Library NZ/Wikimedia Commons 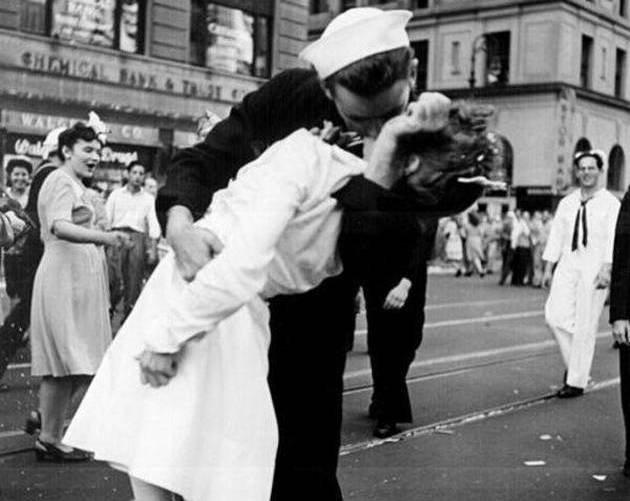 Imagine your whole life collapsing because your country has gone to war. Then imagine that war eventually ending and your life finally returning to normal. You open the newspapers and see headlines that scream: “VICTORY” and “PEACE.”

A shiver goes down your spine, and you realize that the nightmare you have been living in is over. Then the celebration begins.

World War I, for example, ended when the armistice between the Allies and the German forces went into effect at 11 a.m. Paris time on November 11, 1918.

Then, all over the world, people in Allied countries went crazy with joy and swarmed toward the most iconic landmarks in their home cities: the White House in Washington, D.C., the Arc De Triomphe in Paris, and Buckingham Palace in London.

People were so delirious with joy that they hardly even knew what to do with themselves — they screamed, sang, danced, lit bonfires, and set off fireworks. It took days of celebration and merrymaking before the idea of the war being over would finally sink in. A day later, on November 12, the Daily Mirror reported:

“There was a scene of wonderful loyalty at Buckingham Palace, dense crowds were shouting ‘We want the King!’ The King, the Queen, Princess Mary and the Duke of Connaught appeared on the balcony, and His Majesty spoke a few words. Indescribable scenes of enthusiasm followed.”

A quarter-century later, on May 8, 1945, much of the Western world went crazy for a second time when World War II ended with the celebration of Germany’s surrender the previous day. Crowds gathered in the streets, and the Royal Family once again reappeared on the balcony. Princess Elizabeth and Princess Margaret were even allowed to anonymously join the crowd and partake in the festivities.

However, World War II wasn’t yet over — at least not in the Far East. It wasn’t until a few months later, on August 14, 1945 (V-J Day), that the surrender of Japan to the Allies was announced and the people could celebrate the war’s hostilities coming to a complete close. Once again, people were overjoyed.

According to LIFE magazine, Americans celebrated “as if joy had been rationed and saved up for the three years, eight months and seven days since Sunday, Dec. 7, 1941.”

In Washington, D.C., office workers threw open their windows and showered those below with shredded paper and ticker tape. When the tape and the paper ran out, pillow feathers were used instead. In San Francisco, two naked women celebrated by jumping into a pond at the Civic Center.

In New York, a sailor, crazy with joy, grabbed a nearby nurse, kissed her, and created one of the most iconic (and, more recently, controversial) photographs in American history. Today, there is no better embodiment of V-J Day — or of the joy that accompanies any end-of-war celebration — than that one sincere, spontaneous, ecstatic kiss.