László Bíró was a Hungarian-Argentine inventor who patented the first commercially successful modern ballpoint pen. The first ballpoint pen was invented roughly 50 years earlier by John J. Loud, but it did not attain commercial success. 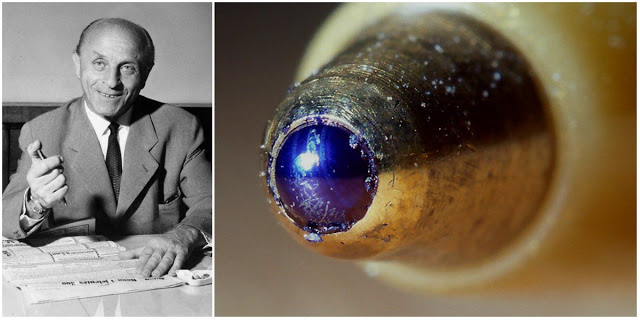 Bíró was born to a Hungarian Jewish family in Budapest, Hungary, on 29 September 1899 to Mózes Mátyás Schweiger and Janka née Ullmann. After leaving school, he began work as a journalist in Hungary.

While working as a journalist Bíró noticed that the ink used in newspaper printing dried quickly, leaving the paper dry and smudge-free. He tried using the same ink in a fountain pen, but found that it would not flow into the tip, as it was too viscous.

Bíró presented the first production of the ballpoint pen at the Budapest International Fair in 1931. Working with his brother György, a chemist, he developed a new tip consisting of a ball that was free to turn in a socket, and as it turned it would pick up ink from a cartridge and then roll to deposit it on the paper. Bíró patented the invention in Paris in 1938.

During World War II, Bíró fled the Nazis with his brother, moving to Argentina, in 1943. On 17 June 1943, they filed another patent, issued in the USA as 2,390,636 Writing Instrument, and formed Biro Pens of Argentina (in Argentina the ballpoint pen is known as birome). This new design was supposedly licensed for production in the United Kingdom for supply to Royal Air Force aircrew.

In 1945, Marcel Bich bought the patent from Bíró for the pen, which soon became the main product of his BIC company. Bic has sold more than 100 billion ballpoint pens worldwide. In November of that same year, promoter Milton Reynolds introduced a gravity-fed pen to the U.S. market, to try to get around Biro’s patent, which was based on capillary action, where fresh ink is drawn out of the reservoir of the pen as ink is deposited on the paper. Because the Reynolds workaround depended on a gravity feed, it did not infringe, but required thinner ink and a larger barrel. The Reynolds Pen was a sensation for a few years, until its reputation for leaking and competition from established pen manufacturers overtook it.

Argentina’s Inventors’ Day is celebrated on Bíró’s birthday, 29 September. A ballpoint pen is widely referred to as a “biro” in many countries, including the UK, Ireland, Australia and Italy.