At a public lecture in Pittsburgh in 1934, four hundred lucky students were privy to a lecture by Albert Einstein, in which the great man mathematically derived his famous mass-energy equivalence equation: E=mc2. What you see below is a photo from that lecture, and what is thought to be the only surviving photo that shows Einstein working on that derivation. 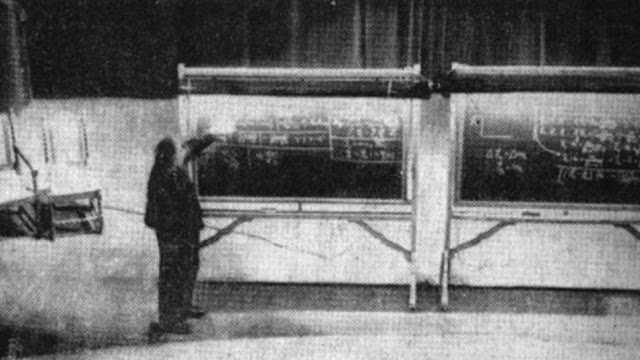 The photo was pulled from a halftone newspaper clipping by David Topper and Dwight Vincent of the University of Winnipeg, who discovered it in 2007. Sadly, everything is a bit fuzzy so you can’t really make out the famed equation itself. And even though the original article had a crisp picture of Einstein posing next to one of his blackboards, he’s next to the wrong one.

This lecture is interesting from a historical and sociological point of view because, at the time, Einstein was at the height of his fame, the equivalence of energy and mass was being discussed in newspapers, and his presence in Pittsburgh created much attention among the general public. Einstein exhibited his well-known intuitive style of using only the most important physical information in the zero-momentum frame derivation. His method was simple and direct and is relevant to those who teach the zero-momentum frame idea. From the perspective of the nonspecialists in the Pittsburgh audience, it was presented at an expert level without allowing for many explanatory concessions we would take for granted today. A definitive picture of Einstein, in front of his famous energy equation, was missed by photographers who posed him with the wrong blackboard in the background.

Photographers were most fond of snapping pictures of Albert Einstein standing before a blackboard containing equations, thus reinforcing the stereotype of the ethereal scientist amid his remote and abstract mathematical world. There are abundant pictures fitting this format, one of which we analyzed earlier. Most are obviously posed shots taken either before or after a lecture; only a few are candid, taken during the lecture.

The picture was taken at the Carnegie Institute of Technology now Carnegie-Mellon University in Pittsburgh, Pennsylvania on 28 December 1934. Einstein was delivering the prestigious Josiah Willard Gibbs Lecture of the American Mathematical Society. It was taken from the
balcony early in the lecture. The logistics of making a blackboard presentation to over 400 people were daunting in 1934, and special electrical lighting fixed to the top of two blackboards was devised. Prior to the talk the two illuminated blackboards were filled with the requisite equations—the “hieroglyphics of higher mathematics” in the words of one newspaper reporter. We see Einstein in caught in the act of gesturing with his left hand as he explains something about the equations near the top of the left blackboard.

In the popular mind the ideal picture would have been one with the equation E=mc2 emblazoned on the blackboard. The title of Einstein’s lecture was, after all, “An elementary proof of the theorem concerning the equivalence of mass and energy.” Not surprisingly, the illustrious equation is on one of the blackboards. Unfortunately it is not in the close-up shot taken before the lecture, which depicts Einstein with the left blackboard. Instead, it is the right blackboard that contains the equation. But its format may disappoint or confuse the average viewer, because from the start of the lecture Einstein employed the convention of setting the speed of light c to unity. Hence a close look at the lower left section of the right blackboard in reveals the relation △E0= △m, and below it is E0=m. As far as we know this picture is the only extant picture with Einstein and his famous equation.

Here’s the math behind the magic, the derivation of mass-energy equivalence as presented by Albert Einstein: 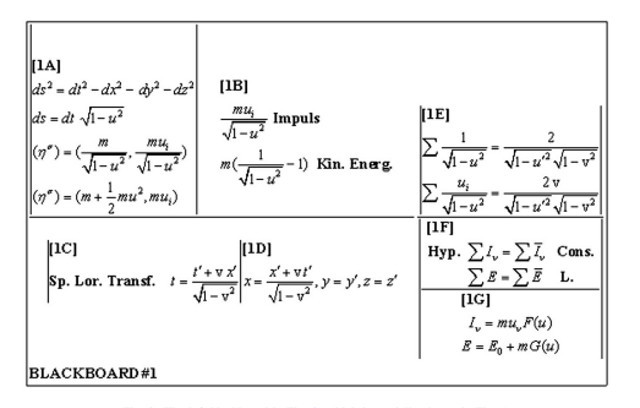 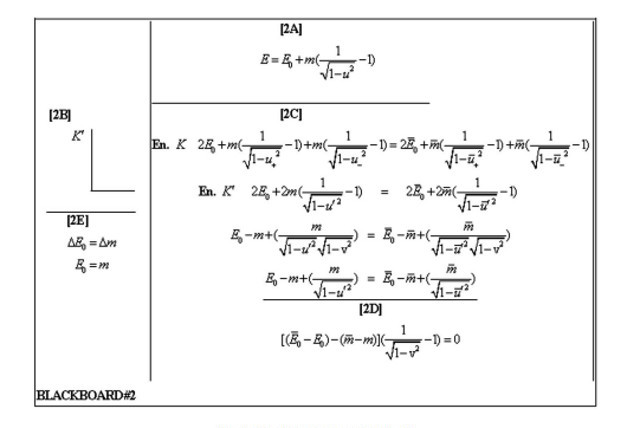 (via Relativity Physics and Science Calculator)