Before there was the likes of Kelly Slater, Laird Hamilton, Wayne “Rabbit” Bartholomew or Eddie Aikau, there was Duke Kahanamoku. “The Duke” is known as the father of surfing, as it was Duke who helped to take the sport of surfing around the world during the 1910s. 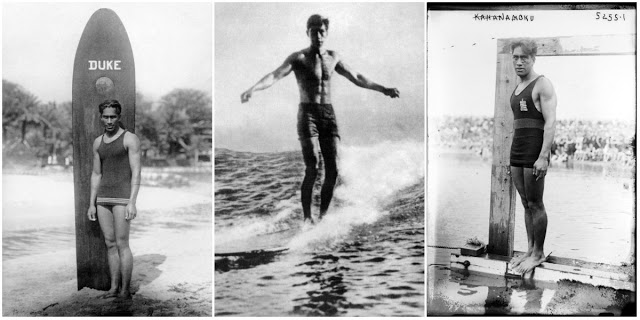 Duke Kahanamoku was born on August 24, 1890, as Duke Paoa Kahinu Mokoe Hulikohola Kahanamoku in Honolulu, Hawaii. He is a descendant of Hawaiian royalty with his parents both coming from the lineage of the lower-ranking nobles who served the royalty. “Duke” was not a title or a nickname, but a given name. He was named after his father, Duke Halapu Kahanamoku, who was christened by Bernice Pauahi Bishop in honor of Prince Alfred, Duke of Edinburgh, who was visiting Hawaii at the time.

Growing up on the outskirts of Waikiki, Kahanamoku spent his youth as a bronzed beach boy. At Waikiki Beach he developed his surfing and swimming skills. In his youth, Kahanamoku preferred a traditional surf board, which he called his “papa nui”, constructed after the fashion of ancient Hawaiian “olo” boards. Made from the wood of a koa tree, it was 16 feet (4.9 m) long and weighed 114 pounds (52 kg). The board was without a skeg, which had yet to be invented. In his later career, he would often use smaller boards but always preferred those made of wood.

On August 11, 1911, Kahanamoku was timed at 55.4 seconds in the 100 yards (91 m) freestyle, beating the existing world record by 4.6 seconds, in the salt water of Honolulu Harbor. He also broke the record in the 220 yd (200 m) and equaled it in the 50 yd (46 m). But the Amateur Athletic Union (AAU), in disbelief, would not recognize these feats until many years later. The AAU initially claimed that the judges must have been using alarm clocks rather than stopwatches and later claimed that ocean currents aided Kahanamoku.

Kahanamoku easily qualified for the U.S. Olympic swimming team in 1912. At the 1912 Summer Olympics in Stockholm, he won a gold medal in the 100-meter freestyle, and a silver medal with the second-place U.S. team in the men’s 4×200-meter freestyle relay. During the 1920 Olympics in Antwerp, he won gold medals both in the 100 meters (bettering fellow Hawaiian Pua Kealoha) and in the relay. He finished the 100 meters with a silver medal during the 1924 Olympics in Paris, with the gold going to Johnny Weissmuller and the bronze to Duke’s brother, Samuel Kahanamoku. At age 34, this was Kahanamoku’s last Olympic medal. He also was an alternate for the U.S. water polo team at the 1932 Summer Olympics.

Between Olympic competitions, and after retiring from the Olympics, Kahanamoku traveled internationally to give swimming exhibitions. It was during this period that he popularized the sport of surfing, previously known only in Hawaii, by incorporating surfing exhibitions into these visits as well. His surfing exhibition at Sydney’s Freshwater Beach on December 24, 1914 is widely regarded as a seminal event in the development of surfing in Australia. The board that Kahanamoku built from a piece of pine from a local hardware store is retained by the Freshwater Surf Club. There is a statue of Kahanamoku on the Northern headland of Freshwater Beach, New South Wales. He made surfing popular in mainland America first in 1912 while in Southern California.

During his time living in Southern California, Kahanamoku performed in Hollywood as a background actor and a character actor in several films. In this way, he made connections with people who could further publicize the sport of surfing. Kahanamoku was involved with the Los Angeles Athletic Club, acting as a lifeguard and competing in both swimming and water polo teams.

While living in Newport Beach, California on June 14, 1925, Kahanamoku rescued eight men from a fishing vessel that capsized in heavy surf while attempting to enter the city’s harbor. Twenty nine sport fishermen went into the water, and seventeen eventually drown. Using his surfboard Duke was able to make repeated trips back & forth from shore to the capsized ship increasing the number of those rescued. Two other surfers saved four more fishermen. At the time the Newport Beach police chief called Duke’s efforts “The most superhuman surfboard rescue act the world has ever seen.” It also led to lifeguards across the US to begin using surfboards as standard equipment for water rescues.

In 1940 Duke married Nadine Alexander, who accompanied him when he traveled. Kahanamoku was the first person to be inducted into both the Swimming Hall of Fame and the Surfing Hall of Fame. The Duke Kahanamoku Invitational Surfing Championships in Hawaii, the first major professional surfing contest event ever held in the huge surf on the North Shore of Oahu, was named in his honor. He is a member of the U.S. Olympic Hall of Fame. Duke went on to serve as the Sheriff of Honolulu, Hawaii from 1932 to 1961, serving 13 consecutive terms. During this period he also appeared in a number of television programs and films, such as Mister Roberts (1955), and was well liked throughout the Hollywood community.

Kahanamoku died of a heart attack on January 22, 1968, at the age of 77. He is still remembered for how he took surfing around the world. There is a memorial statue on Waikiki beach of the Duke that millions of tourists visit every year… and the statue is constantly covered with leis. 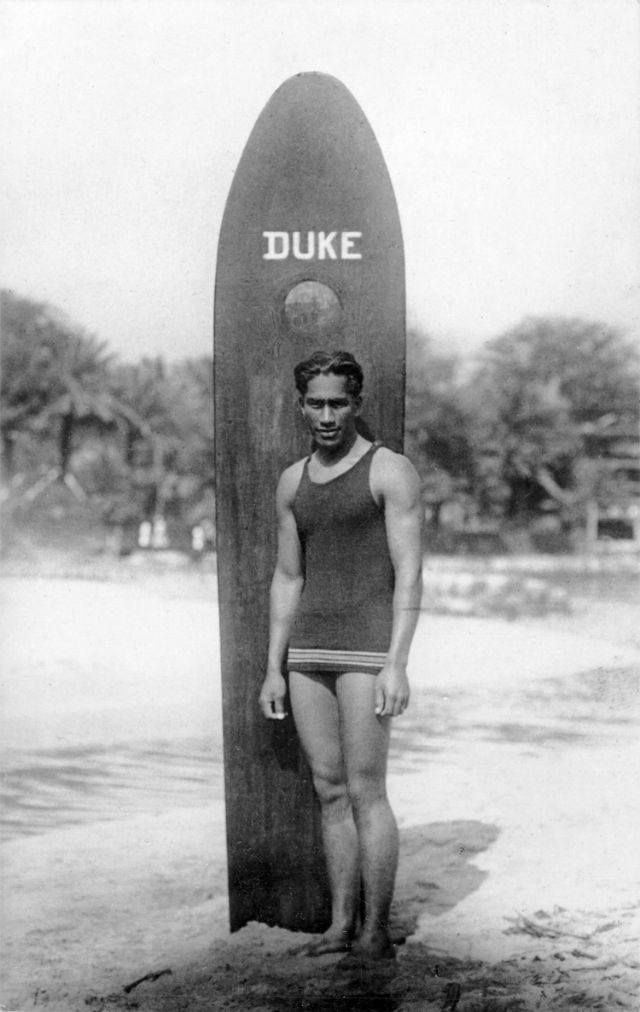 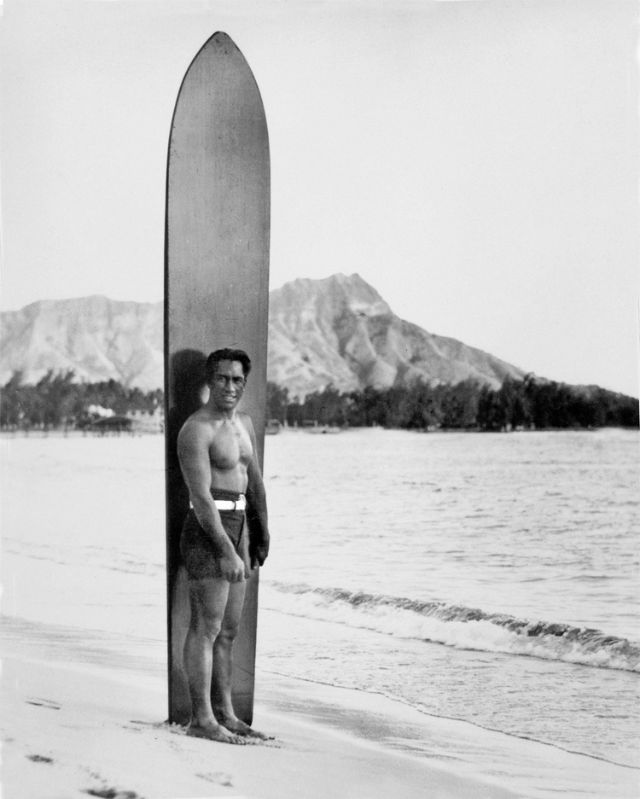 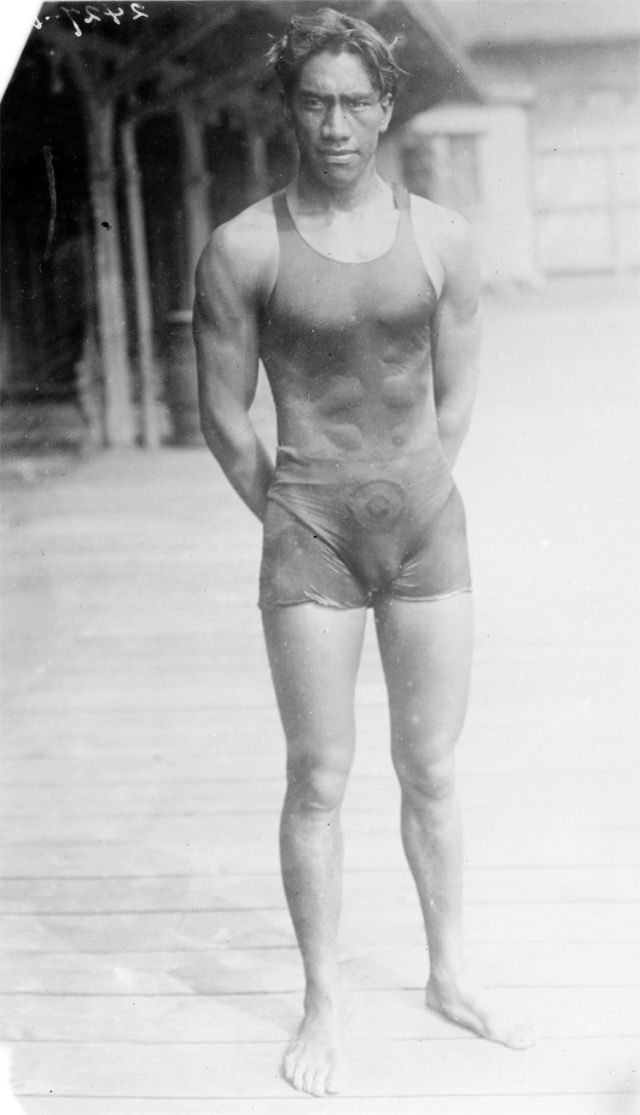 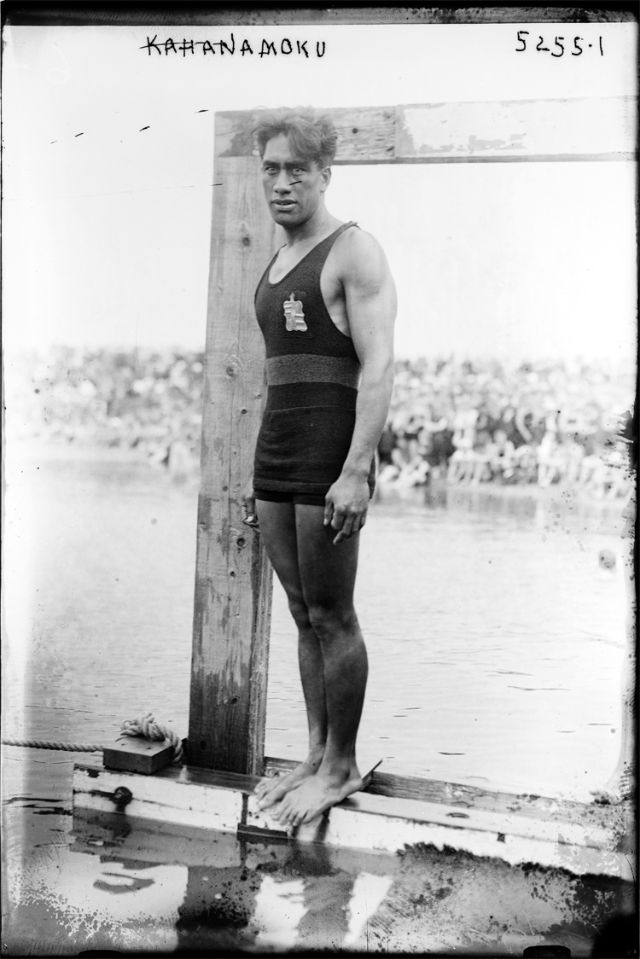 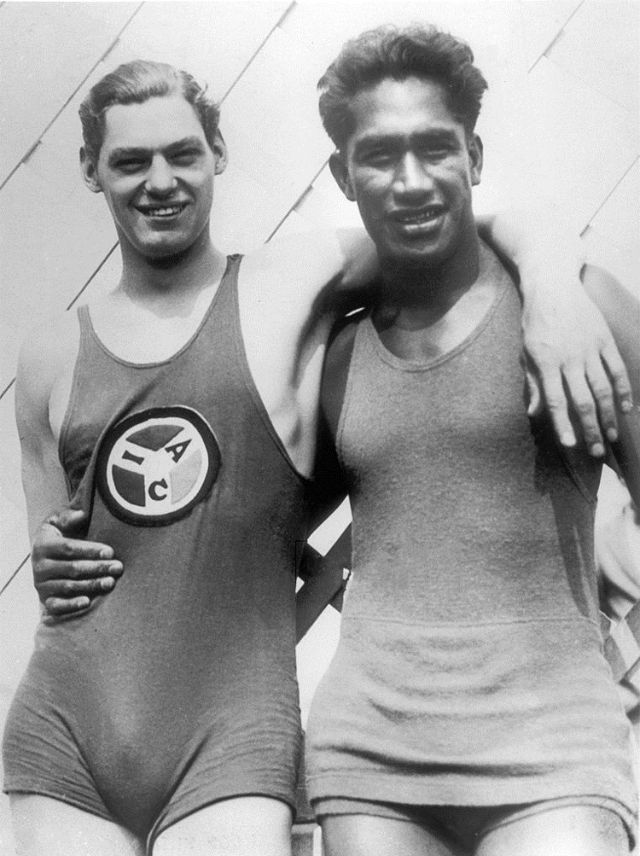