Founded in 1918 by siblings Harry and Jack Cohn and friend Joel Brandt as CBC Film Sales Corporation, Columbia Pictures is one of the oldest studios in Hollywood. In its early years, the studio mostly churned out low-budget fare, leading the Cohns and Brandt to re-brand themselves in 1924 as the more sophisticated-sounding Columbia Pictures. Their name and torch-bearing female logo refer to Lady Columbia, which is the mostly forgotten female symbol of the United States.

The Columbia Pictures logo, featuring a woman carrying a torch and wearing a drape (representing Columbia, a personification of the United States), has gone through five major revisions. Originally in 1924, Columbia Pictures used a logo featuring a female Roman soldier holding a shield in her left hand and a stick of wheat in her right hand. The logo changed in 1928 with the woman wearing a draped flag and torch. The woman wore the stola and carried the palla of ancient Rome, and above her were the words “A Columbia Production” (“A Columbia Picture” or “Columbia Pictures Corporation”) written in an arch. The illustration was based upon the actress Evelyn Venable, known for providing the voice of The Blue Fairy in Walt Disney’s Pinocchio.

The current logo was created in 1992, and started its use in films the year after, when Scott Mednick and The Mednick Group was hired by Peter Guber to create logos for all the entertainment properties then owned by Sony Pictures. Mednick hired New Orleans artist Michael Deas, to digitally repaint the logo and return the woman to her a “classic” look. Michael Deas hired Jenny Joseph, a graphics artist for The Times-Picayune, as a model for the logo. Due to time constraints, she agreed to help out on her lunch break. 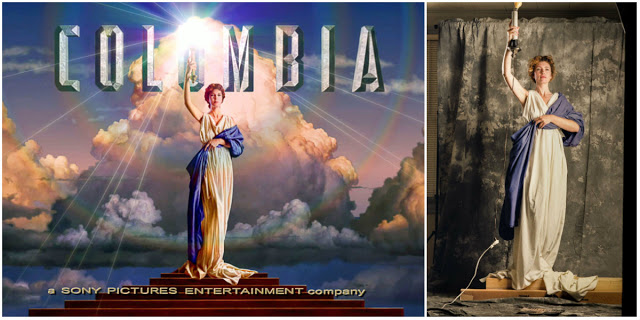 The original Lady Columbia was draped in an American flag, but Deas was told to change the color scheme to white, orange, and blue. (In a 2013 interview, Deas said he couldn’t remember whether it was due to legal or trademark issues.) The photo shoot lasted four hours by photographer Kathy Anderson in the living room of her New Orleans apartment, which had been converted to a small photo studio.

“When the amazingly talented illustrator (and friend) Michael Deas asked me to shoot reference photos for a painting, I had no idea how iconic that artwork would become,” Anderson said. “My penchant for large soft box light modifiers was perfect for the assignment. A co-worker, Times-Picayune newspaper page designer Jenny Joseph was the perfect model and the rest is history.”

Deas used the resulting images for his iconic painting. It’s the only time Joseph has ever modeled, but millions of people have seen her face for the last 25 years every time they go to the movies. Not a bad torch to bear.