Japanese prisoner of war sits dejectedly behind barbed wire after he and some 306 others were captured within the last 24 hours of the Okinawa battle by Sixth Marine Division. Japan, 1945.Marine Corp/Wikimedia Commons

A photograph found on the body of a dead Japanese soldier showing an American prisoner of war wearing a blindfold and with his arms tied, about to be beheaded with a sword by a Japanese soldier. Japan, 1943.Wikimedia Commons

American prisoners of war celebrate the Fourth of July in the Japanese prison camp of Casisange. It was against Japanese regulations and discovery would have meant death, but the men celebrated the occasion anyway. Philippines, 1942.Wikimedia Commons

American POW, a lieutenant colonel in the U.S. Air Force, is paraded barefoot and with a bandaged face through the street by two Vietnamese soldiers during the Vietnam War. Vietnam, 1970.Hulton Archive/Getty Images

German female prisoners of war outside their tented accommodation in a camp for SS, Luftwaffe, and civilian women prisoners at Vilvoorde on the outskirts of Brussels. Belgium, 1945.Wikimedia Commons

German prisoners in batches of 1,000 arriving at a prisoner of war camp during World War I. Germany, 1917.Universal History Archive/UIG via Getty Images

Prisoners making shoes from straw at Zossen prisoner of war camp during World War I. Germany, 1914.Library of Congress

Russian prisoners of war sweeping a street in North Germany during the World War I. Germany, 1915.Michael Nicholson/Corbis/Getty Images

Indian prisoners of war in a Japanese prison camp in Singapore, where they lived on starvation rations for months. Occupying troops discovered grave cases of malnutrition and emaciation in most of the camps. Singapore, 1945.Flickr

These German soldiers were a few of the thousands of prisoners taken by the Red Army recently along the Russian Front. Russia, 1943.Bettmann/Getty Images

German prisoners captured at the fall of Aachen march through the ruined city streets to captivity. Germany, 1944.Wikimedia Commons

Confederate prisoners captured by the Union Army at the Battle of Gettysburg. Pennsylvania, 1863.Wikimedia Commons

An execution of SS troops taken prisoner in a coal yard in the area of Dachau concentration camp during the liberation of the camp. Poland, 1945.Wikimedia Commons

1,200 U.S. soldiers that escaped from a POW camp at Limburg. Germany, 1945.Wikimedia Commons 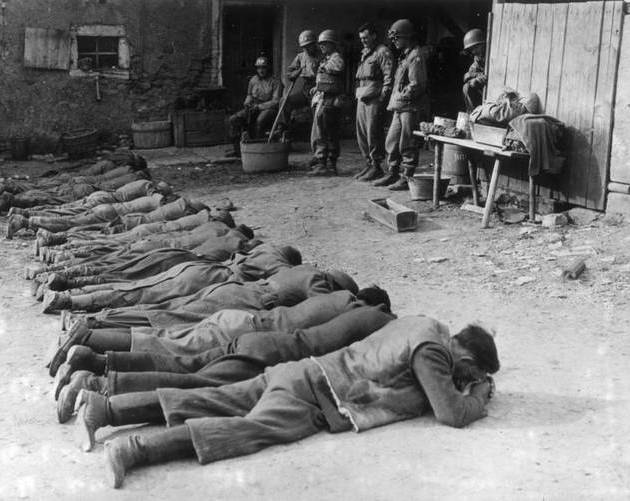 Forgotten Victims: 30 Harrowing Photos Of Prisoners Of War Throughout History

When Everett Alvarez Jr. signed up for the U.S. Air Force in 1960, he didn’t imagine that he would become the first and nearly longest-held American prisoner of war in Vietnam; he just wanted to fly.

Alvarez, the son of two poor Mexican immigrants, had just graduated as an engineer from Santa Clara University and hoped his service in the Air Force could be a stepping stone to becoming an astronaut.

Those dreams changed when his plane was shot by an anti-aircraft gun while flying on a bombing run on Hanoi, forcing him to eject from his plane. Alvarez was quickly captured by the North Vietnamese forces and brought to the infamous Hỏa Lò Prison, sarcastically referred to as the “Hanoi Hilton” by its prisoners.

In Hỏa Lò Prison, Alvarez was beaten and tortured. He was fed feathered blackbirds and fed almost nothing for months. He was interrogated constantly, though he refused to give up any information. At one point, he had his wrists cut and was beaten so badly that, even after multiple surgeries back home, his hands still shake.

After nearly nine years in prison, Alvarez was finally released at the end of the war and now lives in Virginia, where he runs a multimillion-dollar IT consulting firm. However, his scars remain.

From Vietnam to World War II and back through history, prisoners of war have existed for as long as war itself. Since the time of humankind’s first armed conflicts, there have been numerous incentives to capture rather than immediately kill enemy forces. For one, it gives an army the ability to trade captive soldiers for prisoners taken by the other side. In addition, prisoners of war were also often used for their labor, sold into slavery, or killed in ritual sacrifice.

In modern times, prisoners of war are rarely sacrificed or sold to slavers, but that doesn’t mean that conditions have uniformly become better. While the severity of the horrors at prison camps are dependent on the army in question, as well as the conflict they are engaged in, being a prisoner of war, even in modern times, can be accompanied by such horrors as starvation, torture, and death.

The images above reveal how the experience of prisoners of war has changed over time, and how it has, tragically, remained the same.

Next, see some haunting photos of prisoners during the Cambodian Genocide. Then, view heartbreaking images of children caught in the chaos of World War II.