The Great Incline or Mountain Elevator was about 2,590 feet (789 m) long and rose 1,238 feet (377 m) in elevation, from 1,954 feet (596 m) at Rubio Canyon to 3,192 feet (973 m) at Echo Mountain. The incline started out at a slope of 57% grade and increased to almost 62% grade before dropping back to 52% grade and finished at 39% grade at the top. Because of the two major bends in the incline, you could not see the top from the bottom, or the bottom from the top. This meant that the passengers on the incline cars could not see the other car until both cars were near the passing tracks at the center turnout. After they had passed at the turnout they would again lose sight of the opposing car as the car traveling up went over the bend and onto the 52% grade. 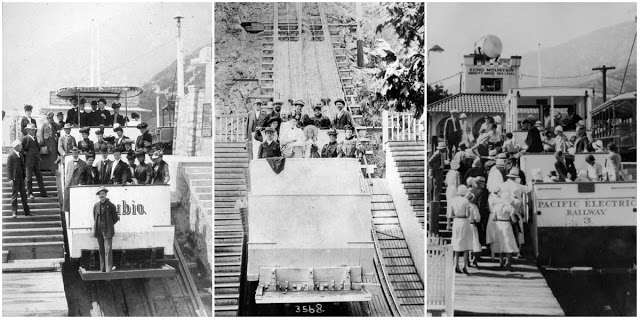 The Mount Lowe Railway was born from a desire of the Pasadena Pioneers to have a scenic mountain railroad to the crest of the San Gabriel Mountains. There was already established a trail to the peak of Mount Wilson, but that trip was arduous and ofttimes required more than a day to travel up and down. Several proposals were floated to establish some sort of mechanical transportation to the summits, but they all lacked funding.

David J. Macpherson, a civil engineer from Cornell University and a newcomer to Pasadena (1885), proposed a steam driven cog wheel train to reach the crest via Mount Wilson. It wasn’t until he was introduced to the millionaire Thaddeus S. C. Lowe (arrived in Pasadena 1890) that a fully funded plan could be put into action. The two men visited Colorado to view the mountain railway to Pike’s Peak. Lowe was impressed with the trolley car systems in the city and thought that should be the way to go. This would make the Mount Lowe Railway the only electric traction rail line ever to be put into scenic mountain railway service.

Work was begun on the Great Incline with such steep grades that no mule could be flogged enough into negotiating it. Instead, materials were carried up on the back of laborers. Grading became a particular problem. While funiculars were usually considered to require four rails, two for the ascending car, and two for the descending car, there was not enough room to widen the grade to accommodate four rails. Over night the inventive Thaddeus Lowe came up with a plan to only use four rails where the cars pass each other and three rails on the upper and lower ends of the run, whereby the cars shared the center rail. The ingenious three-railed funicular not only fit, but it also reduced the amount of required materials. This three-railed design has been applied on other places as well (e.g. Angels Flight).

A great feat of engineering was realized with a trestle that was built to negotiate a 150-foot-deep (46 m) granite chasm across 250 feet (76 m) of track on a 62% grade. The trestle was named, as was customary in railroad constructions, for the chief engineer, David Macpherson, thus, the Macpherson Trestle.

The Great Incline cable mechanism was engineered by Andrew Smith Hallidie of San Francisco cable car fame. It climbed 2,200 feet (670 m) with approximately 6,000 feet (1,800 m) of cable spliced into a complete loop which raised and lowered the cars of the Incline. At the Echo summit an incline powerhouse was erected to house the winding motor and gear works which powered the 9-foot-diameter (2.7 m) grip wheel. The wheel consisted of 72 clamping “finger” mechanisms which bit down on the cable creating a smooth, non-slip actuation of the winding cable.

The incline grade changed three times from a steep 62% grade at the base to a gentler 48% grade at the top, but the cars were designed to comfortably adjust to the differences in grade. The incline was also equipped with a safety cable which ran through an emergency braking mechanism under each car and provided an emergency stopping of the cars within 15 feet (4.6 m) should a failure of the main cable occur.