An amateur radio set installed in a car by Alfred H. Grebe, a radio manufacturer of New York in 1919, who is shown speaking into the microphone. 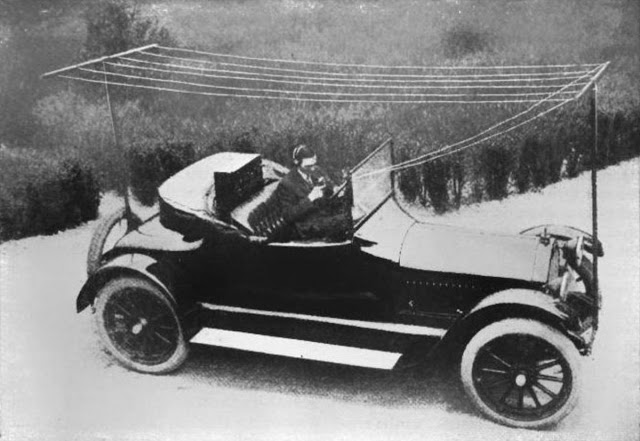 The bulky vacuum tube set is visible in the back seat. It used medium wave frequencies around 2 MHz, requiring the cumbersome “inverted L” wire antenna mounted on the bumpers, which could be quickly put up and taken down and stowed under the car’s chassis.

The car’s body was used as a counterpoise. The radio set was powered by a separate storage battery, with a small dynamotor to generate high voltage for the tubes anode supply.

Grebe noted that he could hear other cars approaching on the road, as the receiver would pick up the radio noise from their unshielded spark plugs.

Broadcasting began in 1920, about the time vacuum tube radio receivers became available, sparking a “radio craze” during the early Roaring 20s. Many car owners installed home radio sets in their cars.as a novelty. Car radios weren’t manufactured until 1930, and did not come standard in vehicles until a number of years later.

Alfred H. Grebe (1895 – October 24, 1935) was a pioneer in the radio broadcasting field. He was born in Richmond Hill in the borough of Queens, in New York City. At the age of 9 he was given a radio set by his father, and soon came to be such an expert that his science teacher at Public School 88 in Jamaica said Alfred knew more than he did. From public school, he went to a training school in Jamaica, and a commercial radio school in Manhattan, New York City, where he conducted his own experiments. By age 15, he became a licensed commercial operator, and went to work as a ship’s radio operator. After three years onboard (during which time he traveled as far as India) he returned to Long Island, where the first commercial station on the island was being built at Sayville. He got a job as an operator there. Later, because there was currently a radio craze, some friends had him make receivers for them. After making a few sets, he decided to go into commercial production.