With World War II nearing its end, hundreds of soldiers perished during the Ramree Island crocodile attack, the deadliest in recorded history. 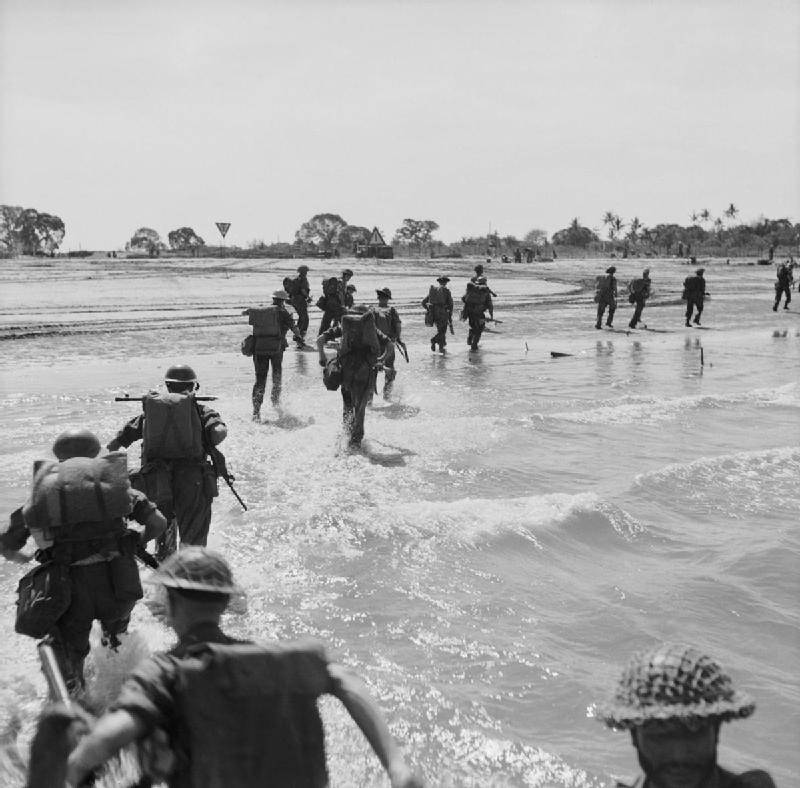 Wikimedia Commons British Marines landing on Ramree Island in January 1945 at the beginning of the six-week battle.

Have something interesting to say about the Ramree Island crocodile massacre? Tell us below!

Imagine you’re part of a military force outflanked by the enemy on a tropical island. You have to rendezvous with another group of soldiers on the other side of the island — but the only way to do so is to traverse a thick swamp filled with deadly crocodiles.

This very situation happened to Japanese troops occupying Ramree Island in the Bay of Bengal during World War II in early 1945. Those who survived the battle reportedly didn’t fare well when they chose the doomed escape route across the crocodile-infested waters.

At the time, British forces needed an airbase in the area of Ramree Island in order to launch more attacks against the Japanese. However, thousands of enemy troops held the island, causing an exhausting battle that went on for six weeks.

The two sides were stuck in a standoff until the British Royal Marines along with the 36th Indian Infantry Brigade outflanked a Japanese position. The maneuver split the enemy group in two and isolated about 1,000 Japanese soldiers. 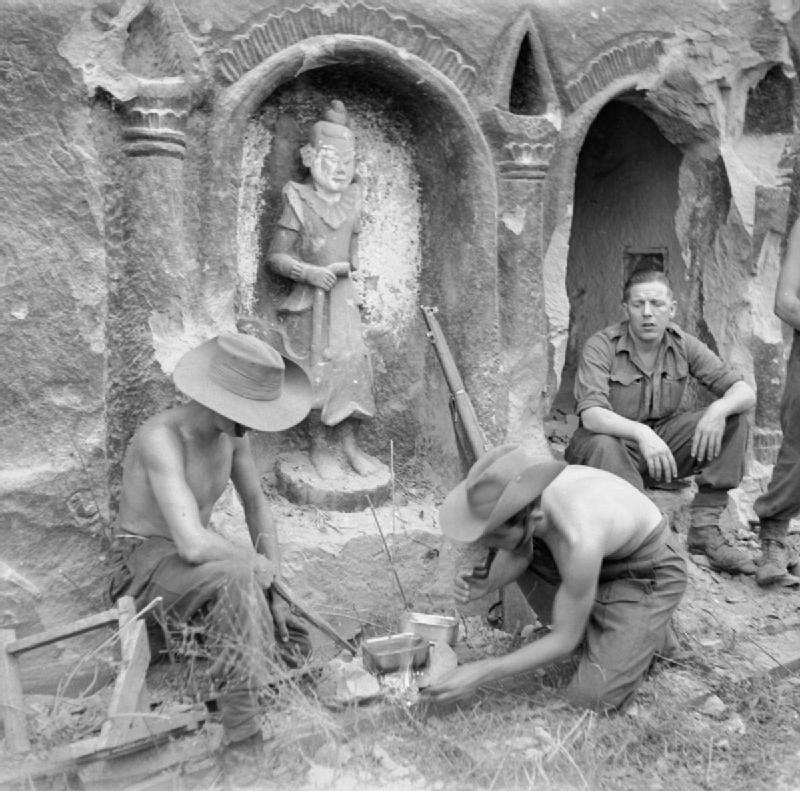 British troops sit near a temple on Ramree Island.

The British then sent word that the smaller, isolated Japanese group should surrender. The unit was trapped and had no way to reach the safety of the larger battalion. But rather than accept surrender, the Japanese chose to make an eight-mile journey through a mangrove swamp.

That’s when things went from bad to worse.

The mangrove swamp was thick with mud and it was slow-going. British troops monitored the situation from afar at the edge of the swamp. The British didn’t pursue the fleeing troops closely because the Allies knew what awaited the enemy inside this natural death trap: crocodiles.

Saltwater crocodiles are the largest reptiles in the world. Typical male specimens reach 17 feet long and 1,000 pounds and the largest can reach 23 feet and 2,200 pounds. Swamps are their natural habitat, and humans are no match for their speed, size, agility, and raw power. 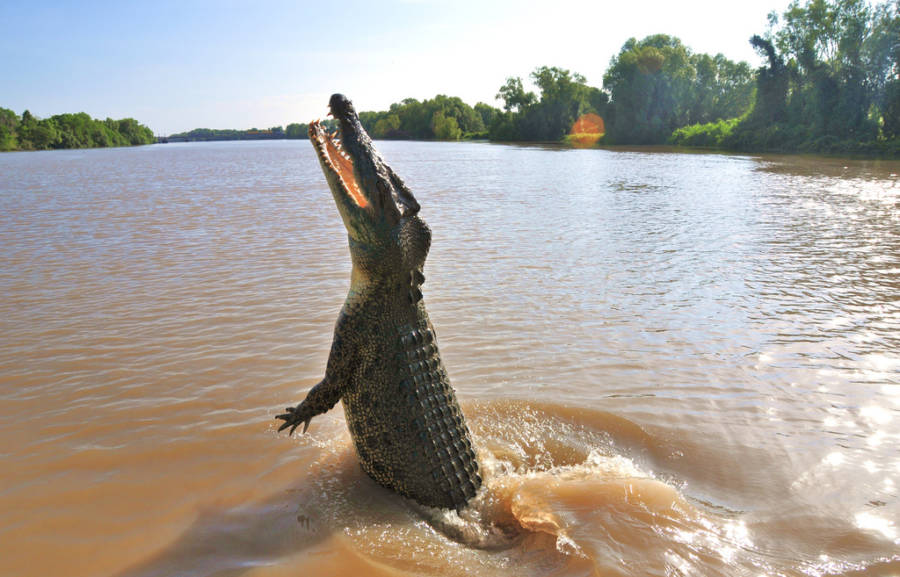 The Japanese understood that saltwater crocodiles have a reputation for eating humans but they went into the mangrove swamp anyway. And in an incident not unlike the infamous U.S.S Indianapolis shark attack that befell American troops later that year, many of these troops didn’t survive.

Soon after entering the slimy mudhole, Japanese soldiers began to succumb to diseases, dehydration, and starvation. Mosquitoes, spiders, poisonous snakes, and scorpions hid in the thick forest and picked off some troops one by one.

Crocodiles appeared when the Japanese got deeper into the swamp. Even worse, saltwater crocodiles are nocturnal and excel at taking prey in the dark.

Several British soldiers said that the crocodiles preyed on the Japanese soldiers in the swamp. The most prominent firsthand retelling of what happened comes from naturalist Bruce Stanley Wright, who participated in the Battle of Ramree Island and gave this written account:

“That night [of Feb. 19, 1945] was the most horrible that any member of the M.L. [motor launch] crews ever experienced. The crocodiles, alerted by the din of warfare and smell of blood, gathered among the mangroves, lying with their eyes above the water, watchfully alert for their next meal. With the ebb of the tide, the crocodiles moved in on the dead, wounded, and uninjured men who had become mired in the mud… The scattered rifle shots in the pitch black swamp punctured by the screams of the wounded men crushed in the jaws of huge reptiles, and the blurred worrying sound of spinning crocodiles made a cacophony of hell that has rarely been duplicated on Earth. At dawn the vultures arrived to clean up what the crocodiles had left.” 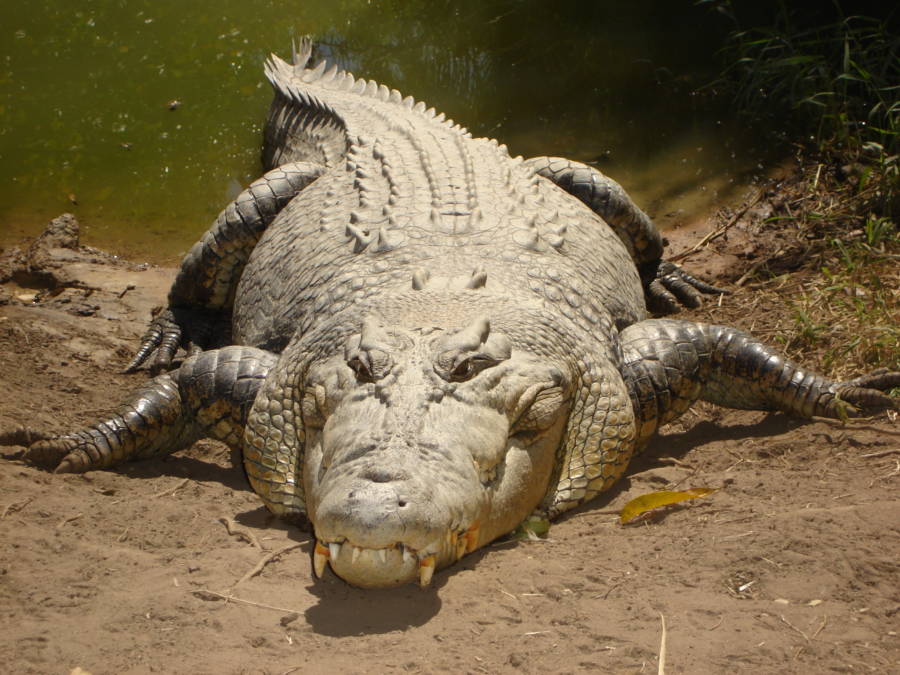 Of the 1,000 troops who entered the swamp, only a reported 480 survived. The Guinness Book of World Records listed this as the largest crocodile attack in history, according to Atlas Obscura.

However, death toll estimates vary. What the British do know for sure is that 20 men came out of the swamp alive and were captured. These Japanese troops told their captors about the crocodiles. But exactly how many men died in the maws of the mighty crocs remains up for debate because no one knows how many troops succumbed to disease, dehydration, or starvation as opposed to predation.

One thing is for certain: When given the choice of surrendering or taking chances in a crocodile-infested swamp, choose surrender. Don’t mess with mother nature.

After this look at the Battle of Ramree Island, see some of the most powerful World War II photos ever taken. Then, read up on Desmond Doss, the Hacksaw Ridge medic who saved dozens of soldiers’ lives during World War II.